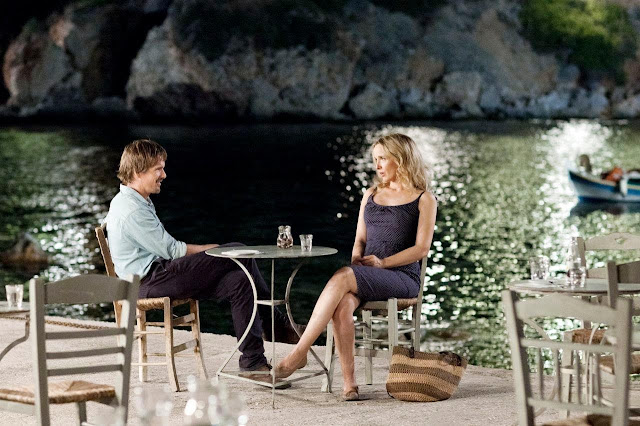 One of the most beautiful things about the films in Richard Linklater's Before... series is that each leaves the audience with a question. When Jesse (Ethan Hawke) and Celine (Julie Delpy) first met in 1995's Before Sunrise, that question was "What next?" After spending a day and night together in Vienna, talking about love and life, everything and nothing, would the two meet up again in six months, as they promised to do in the final moments of the film? When Linklater, Hawke and Delpy revisited the characters in 2004 for Before Sunset, they emphatically answered that, no, they did not see each other again. Jesse and Celine went off and lived their own lives apart, only to meet again in Paris as older, seemingly wiser but no less verbose people. People who were still living with the uncertainty of what would have happened if they had kept their rendezvous. At the end of Before Sunset, as Celine told Jesse that he was going to miss his plane as he sat in her apartment, the same question was posed to the audience: What next?

As was the case with the previous film, Linklater answers the question of what happened to the two fairly early on, and it would be next to impossible to discuss Before Midnight without revealing what Jesse and Celine have been up to. Primarily because that's what a lot of their conversations revolve around. However, since part of the charm of these films is the way in which their questions linger and grow in the mind, offering countless possibilities of what Jesse and Celine's lives look like after so much time, it's understandable that many might want to go in knowing as little as possible. So consider the last two paragraphs a great big spoiler warning, since any discussion of the plot is bound to burst the bubble of anticipation and wonder started nine years ago when Jesse missed his plane.

The opening scene of the film finds Jesse in an airport, bidding a by turns sweet, funny and awkward goodbye to Hank (Seamus Davey-Fitzpatrick), the previously unseen son from his first marriage. As he walks out to his car we see Celine talking on a cellphone. As they prepare to drive off, the camera drifts round to reveal their young twin daughters asleep in the back seat. I think it's fair to say that Jesse never caught that plane.

On the surface, Before Midnight feels very similar to the two films that preceded it. The film doesn't have an especially rigourous plot, but instead consists of a series of conversations between Hawke and Delpy, with the occasional contributions from a small supporting cast, and it all takes place over the course of a single day. As such, Linklater maintains the same low-key visual style that typified Sunrise and Sunset; simple compositions, long takes of the characters walking through a beautiful location (Greece this time around) and a woozy structure that allows the scenes to flow from one to the next with a naturalism and grace that perfectly complements the free-flowing, philosophical conversations.

But while the film might look like its ancestors, it also feels subtly yet palpably different. It's a slightly more contemplative film, in that while its conversations still have the same effervescent fizz to them that the earlier films did, thanks largely to the effortlessly engaging performances by Hawke and Delpy, it also finds time for quiet moments. There are plenty of scenes of people discussing the many forms that love takes and the nature of life, but there are also moments where Jesse and Celine sit and watch the sunset together. It's a small change, especially since the first two films were hardly kinetic balls of narrative barreling forward, but they were also heady rushes of emotion and connection. But this film isn't about strangers meeting for the first time or old friend re-connecting after years apart; it's a day in the life of people who spend most days of their lives together.

As such, the major difference between Before Midnight and its predecessors lies in the nature and subject of its conversations. While Jesse and Celine still talk about the world around them, they also talk at length about their world; the personal universe that is a long-lasting relationship. A universe of shared experiences, in-jokes and sublimated grudges. Even the conversations they have with other people are filtered through the prism of their relationship. When they talk to a young couple who live apart and communicate largely via Skype, it's a conversation informed by the fact that theirs is exactly the kind of relationship that might have been perfect for Jesse and Celine when they first met, but which was impossible at the time. It's an interesting examination of how relationships have changed since Before Sunrise came out, but also a highly specific contrast between young love and one that has grown and changed over nearly two decades.

It's the change in that relationship that ultimately makes Before Midnight feel both like a natural evolution of - and possible conclusion to - Jesse and Celine's story, yet also like something completely separate from the films that came before it. Sunrise and Sunset had a kind of weightlessness to them because the interaction between the characters didn't have concrete stakes underpinning their actions. In the first film they were two young people who didn't know each other but decided to get off a train together; in the second they were still basically strangers who reconnected after years apart.

Here, they are a couple who have been together for a long time, have a family together, but are still individuals who want on some level to pursue their own dreams, and there's an inherent tension lying underneath that situation. As such, the film feels deceptively heavy under its sun-dappled meandering since any argument feels like it could have grave consequences. (This is particularly true during the film's fractious final act, which strangely feels like a condensed, better remake of Linklater's earlier "people fighting in a room" movie Tape.) While it's still as thoughtful, provocative and funny as the first two films, it's also a sadder and wiser film that seems to reflect not just growth on the part of the characters, but also that of Linklater, Hawke and Delpy, who all bring a sensitivity to the script and the performances that makes for a great film about the shifting nature of love.

The one caveat I have about Before Midnight, which is my favourite film of 2013 at the time of writing, is that I'm not sure if it would have such a strong impact on people who aren't familiar with the characters and the previous films. It's not exactly heavy on continuity, and most of the back story is covered over the course of the film, but it feels very much like a final chapter, rather than a story that functions perfectly on its own. However, it works wonderfully as a conclusion, if only because it's the first film in the series that doesn't leave the audience wondering "What next?" at its end. You can pretty much tell how things are going to work out for Jesse and Celine, and while I would love to see them reappear in 2022, 2031 and 2040, I also feel like I'd be okay if this was the last that we saw of them. We got off the train with them, now seems like the perfect time for them to head out and live their lives without us.