Doctor Who - The Rings of Ankhaten (S7E8) 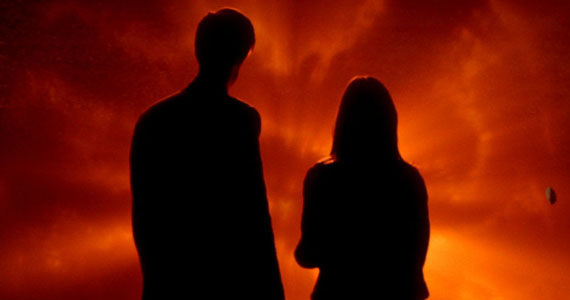 The power of love is, in addition to being a curious thing, a plot device that Doctor Who likes to fall back on in those moments when an interesting premise flames out or the writers seem to have written themselves into a corner. It's not a bad plot device, either. I mean, it would be a terrible one if Doctor Who was a terribly cerebral series intent on creating works that can stand up to forensic levels of scrutiny, but it isn't. And trying to make it so would be like, I don't know, explaining that Jedis can move things with their minds because they've got some magic blood disorder; making sure everything is airtight and logical removes a lot of the fun from a big, daft adventure series. Having said that, there's a difference between having all the people on Earth wish The Doctor back to his full power in "The Last of the Time Lords" and using a leaf to defeat a giant soul-eating star. There's matters of scale to consider.

But I'm getting ahead of myself. "The Rings of Akhaten" begins with probably the most British image ever created: The Doctor, reading the Beano, while "Ghost Town" by The Specials plays in the background. (Incidentally, I know it's probably only been used as an easy signifier to say "This is happening in the '80s!" but the inclusion of the archetypal state of the nation pop song in an episode that airs the week a host of sweeping, awful reforms attacking the welfare state are introduced strikes me as horribly, if unintentionally, apt.) He watches as the aforementioned leaf hits a young man in the face, causing him to wander into traffic in the worst case of plant-on-man violence since The Ruins. A young woman drags him out of the way of an oncoming car, they look into each others' eyes, and we're treated to a little montage of the two going out, marvelling at the role that a leaf played in the course of their lives (Did Alan Ball did an uncredited pass on this script?) before becoming parents to one Clara Oswald.

Yes, The Doctor is trying to figure out just who his new Companion is in a way which is at least slightly more meaningful - if no less creepy - than just combing through her old Facebook photos. In the course of his snooping, he watches a younger Clara at her mother's funeral and is compelled to show present day Clara something spectacular in the form of the eponymous rings, which are a series of colossal chunks of rock in orbit around a red star. On one of these is a pyramid from which the inhabitants of the rocks say all life originated. The Doctor remains skeptical but says that it's a nice story at least, before taking Clara on a tour of the local market, which is a veritable Mos Eisley Cantina of weird monsters and strange cultists.

Now, I really like Matt Smith as The Doctor. I think he provides a nice balance between the po-faced seriousness of Christopher Eccleston and occasionally wearying energy of David Tennant, and on his best days he can be funny and suggest a being of great power. "The Ring of Akhaten" was not one of his best days, primarily because the scenes featuring all the different aliens relied a little too much on outrageous mugging. There's a time and a place for outrageous mugging, and they are "hardly ever" and "reasonably far away from scenes in which a small child is about to be killed." His more serious turn towards the end of the episode as he tried to impress the episode's villain to death (a kind of scene which my friend and founder of this blog Neil McWilliam has frequently described as "galactic cock-waving") also verged on self-parody, though I think the way in which Smith depicted The Doctor being physically drained by his experience pulled it back just far enough.

Anyway, before all of that, Clara sees two robed figures chasing a young girl named Merry (Emilia Jones) through the streets. Clara lies about seeing her and finds out that Merry is the Queen of Years, a figure who takes part in a yearly ritual designed to appease a "sleeping God" who the people fear will destroy the Universe if it ever awakes. This was a pretty nice showcase for Jenna-Louise Coleman to demonstrate what kind of Companion she will be, which so far seems to be a mix of curiosity, wonder and Amy Pond. She's not an exact clone of Smith's first Companion, and she certainly doesn't have the relationship baggage, but she filled the same role as someone unafraid to wander off and find trouble without necessarily getting into trouble in the process. It's a dynamic the show has done lots in the past and it still works, even in an episode so generally lacking in incident as this one.

So having learned about the ritual - which involved a lot of singing - and convinced Merry that she'll be great, something seems to go wrong and the horrifying Mummy creature inside the pyramid wakes up, hankering for some juicy souls. Merry gets dragged away by a beam of light with The Doctor and Clara in pursuit astride a space moped, in scenes that looked like they could have been done on Tim and Eric Awesome Show, Great Job! Considering how much attention to detail was paid to making the star look as impressive as possible, the sheer cheapness of those scenes was eye-searingly bad.

It turns out that the Mummy isn't the "god" itself, just its watchdog. The star is the actual being in question, and the disruption of its steady feed of young, innocent sacrifices whose memories and souls sustain it causes it to get a bit pissy, which is no small matter where stars are concerned. The Doctor offers his own vast array of memories to save everyone else, though this proves insuffcient, then Clara holds up the all-important leaf and The Doctor talks about how the potential it represents, of the life that her mother didn't live because she died at such a young age. This all proves to be too much for the star (and, if I'm honest, me) which calms down considerably. Love conquers all, The Doctor takes Clara home and continues trying to figure out just what is going on with her.

There's been a lot of discussion online already about this episode, much of which boils down to people thinking it's either a really strong episode or one of the worst episodes the show has ever produced. I wouldn't go that far, Lord knows it's no "Fear Her," but it is one of the weaker ones of Steven Moffat's tenure. Everything about it seemed off, from the distractingly sloppy visual effects to the script by Neil Cross (creator of the enjoyably pulpy Columbo-in-London cop drama Luther) which lacked a lot of the wit and panache that can sustain even the most bland of episodes. Because this was a bland episode. Not irredeemably bad, not without some effective moments, but it washed over me without leaving any trace.


- Is it just me, or does the theme that plays whenever The Doctor is contemplating Clara sound a little like the bridge in "Belle" from Beauty and the Beast? I now can not stop thinking "Here's where she meets Prince Charming. But she won't discover that it's him till chapter three" whenever it plays.

- Also, I know that the show is produced by BBC Wales, but did there really need to be quite so much baritone singing?

- I neglected to mention last week that I really like the new opening credits. They've very stylish and in keeping with the 50th anniversary theme of the show, even going so far as to incorporate Matt Smith's face in a nod to the opening titles of yore.

- As someone who was always excited/terrified by the notion of being trapped on a submarine when things go awry, next week's episode has me pretty excited.