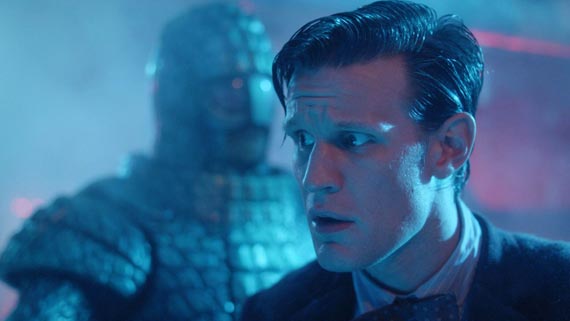 One of the more publicly-touted creative decisions that Steven Moffat made going into the seventh series of New Who was to shift away from big arcs and to focus on single, high-concept episodes. High-concept, to paraphrase Don Simpson, basically means that an idea for a story can be reduced to such a level that it can be held in the palm of your hand. An easy example would be the sheer number of action movies whose premises can be summed up as "Die Hard on a [insert location or mode of transport]."

It's an approach that could work for Doctor Who because it's essentially a show built on pursuing "What if?" scenarios to their full potential, but it hadn't worked out terribly well so far. Whilst the show could still make the small, character stuff work, it struggled to make the more conceptual ideas work quite as well, a problem typified by the most high-concept of the series, the underwhelming "Dinosaurs on a Spaceship". It had a great hook, it had game actors, but it just didn't cohere into anything other than an hour of television built around a title. But as blockbusters have taught us time and again, if you try enough high-concepts, eventually one will stick, and such was the case with "Cold War", a terrific episode which could just have easily been titled "Martian on a Submarine".

As so often happens, The Doctor and his Companion wind up in the wrong place at the wrong time. They want to be in Vegas so that they can have some fun, they wind up on a Soviet submarine in 1983. Incidentally, it's always amusing to me how the typical Who story structure makes The Doctor into basically a tourist whose leisure time is constantly interrupted by death and destruction.

Being a Soviet submarine at the height of the Cold War, things are not going well. In addition to being in a constant state of deadly readiness, prepared to rain nuclear fire down upon the world at a slightest provocation, the men of the submarine have recently taken on board some unusual cargo. They have excavated a chunk of ice containing what they believe is a mammoth, but since this is Doctor Who and not that barely remembered SyFy original movie starring Summer Glau, it turns out that the creature in the ice is, in fact, an Ice Warrior, a member of a proud warrior race who once ruled a vast Martian empire. Kind of a badass, basically, and not the sort of creature you would like to be trapped in an enclosed space with for any period of time.

Unfortunately for everyone on the submarine, this particular Ice Warrior is Skaldak, a great and powerful hero who is considerably disorientated from having spent 5,000 years trapped in the ice. The Doctor initially manages to convince Skaldak that they mean him no harm, then is forced to watch as one of the Soviets does considerable harm to him using a cattle prod. It's an act of aggression which goes against the Martian code of war and, coupled with Skaldak's belief that his people have all died and left him with nothing to live for, this makes him hellbent on wreaking furious vengeance upon not just The Doctor and his comrades, but all of humanity. And thanks to the copious weapons of atomic warfare around him, he is well-placed to do it.

As someone who has always been fascinated by submarines and who grew up loving stories of people trying to survive whilst trapped inside one, I was already predisposed to like "Cold War" since it immediately brings in some of the key elements in any good sub story: claustrophobia, internal and external threats, and no chance of escape. With nowhere to run, The Doctor has to convince the sceptical Soviets that he is there to help them, and they have to work together to defeat Skaldak before he starts a global thermo-nuclear war.

His opposite number, Captain Zhukov (Liam Cunningham, who is the sort of person whose face looks incomplete without a grizzled beard) begrudgingly accepts help from The Doctor and Clara, though he doesn't trust them enough not to point a gun at The Doctor's head when a negotiation with a seemingly restrained Skaldak goes awry, but some of his other men are less willing to cooperate. One, Lieutenant Stepashin (played by Tobias Menzies) even goes so far as to try to strike a deal with the Ice Warrior, having already been established as the sort of fanatical Cold Warrior who relishes the outbreak of a warmer conflict. It doesn't work out terribly well for Stepashin, but it sets up a nice tension as it it becomes clear that not everyone is willing to set aside political beliefs in favour of not being obliterated.

In addition to drawing on the best aspects of submarine films, credited writer Mark Gatiss also weaves in plenty of elements from great, claustrophobic science fiction and horror. The discovery of Skaldak, a being frozen in time and rudely awakened, recalls The Thing and Quatermass and The Pit (Gatiss is, in addition to being a fine writer, a horror aficionado and fan of Nigel Kneale) and even H.P. Lovecraft's At The Mountains of Madness, while the idea of a creature being loose in an enclosed space obviously recalls Alien. Gatiss has been writing for the revived series since the Eccleston year (and he also works with Who showrunner Steven Moffat as co-creator and actor on Sherlock) and this was one of his more satisfying works. It blended together a number of disparate ideas in a way which made sense, and delivered a lean, propulsive story that perfectly suited its chosen milieu.

He also found time to work in a good subplot for Clara, who got to show her mettle by going in to talk with Skaldak when no one else was deemed fit to do so, and played a crucial role in appealing to his sense of honour in the critical moments of the climax. She even got to sing a snatch of Duran Duran's "Hungry Like the Wolf" at the prompting of an old Professor (David Warner) obsessed with Western music. Probably the weirdest thing about that sequence was that it wasn't featured in Neil Gaiman's upcoming episode, considering his prior history with that band.

It was a good showcase for Clara as a Companion, too, since not only did it get some of the usual "The TARDIS can translate all languages" exposition out of the way, but it showed off her courage, strength and sense of humour in a way that previous episodes largely have not. In the end, Skaldak's people answer his distress call and he decides not to annihilate the Earth, but it's clear that this decision isn't driven by elation at not being alone, but because of the emotional appeal that Clara so effectively made to him. The about face he pulled seemed a little abrupt, by Jenna-Louise Coleman was very funny and convincing throughout, so I bought it.

It's unlikely to enter the pantheon of truly great Doctor Who episodes like "Blink" (which, incidentally, is the yardstick I compare every episode against), but it was a superior offering, not only in terms of the middling last couple of episodes, but just in general. This was a funny, suspenseful and smartly constructed episode that did everything that a good episode of Doctor Who can do. It even had a couple of nasty off-screen deaths too, which moves us away from the rut of "The Doctor saves everyone!" episodes we've had recently. Needless to say, this gets a hearty Na Zdorovie from me.


- Interesting that this episode takes place in 1983 considering that was also the year that the previous episode started in. I'm starting to wonder if the series is building up to the revelation that there is something strange and/or miraculous about that year. Apart from the release of David Bowie's Let's Dance and R.E.M.'s Murmur on consecutive days, obviously.

- Very impressive production design on display this week. Doctor Who tends to be pretty sharp in that department (barring the eye-searingly awful green screen from last week) but they really captured the mood and feel of something like Crimson Tide or The Hunt For Red October. The re-design for the Ice Warrior - an enemy which hasn't been seen since 1974 - also had an impressively physical, almost retro vibe to it while still seeming imposing.

- Skaldak was very well-spoken. It seems that most aliens on Doctor Who are very good at enunciating, which suggests to me that not only do most planets have a North, but most of them have a RADA, too.
By Edwin Davies
Labels: Doctor Who, horror, Jenna-Louise Coleman, Mark Gatiss, Matt Smith, review, science fiction, Steven Moffat, television
Newer Post Older Post Home