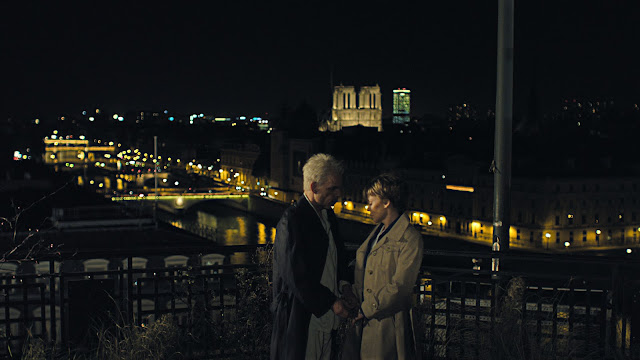 The important thing to remember when watching Holy Motors, the first feature film from director Leos Carax in thirteen years, is that it doesn't make sense and that it isn't necessarily supposed to. That's not to say that it is a dense, completely incomprehensible film, or that any aspect of its production prevents clarity. It's pretty stunning on every level. But it's also a purposefully surrealistic journey through the streets of Paris and the world of cinema, as Carax hurtles recklessly through different styles and genres at a dizzying clip. Like Last Year at Marienbad or Inland Empire, this results in a film which is rich in strange, vivid imagery and sensuous pleasures, but which is best enjoyed in a visceral, emotional or thematic sense, rather than on any narrative level.

That's not to say that the film is without a narrative, but the one it does have is deliberately thin. Denis Levant stars as Monsieur Oscar (he has many names over the course of the film, but this is one which he bears most often), a man who rides around in a limousine driven by his chauffeur/assistant Céline (Édith Scob). Over a 24 hour period, the two travel through the streets of Paris carrying out a number of "assignments" that Céline presents to Oscar. Each of these requires Oscar to don wigs and makeup and to essentially become a new person, be it a perpetually ignored beggar, a father struggling to come to terms with a lie told by his young daughter, or a sewer-dwelling monstrosity who licks the armpit of a model (Eva Mendes) before taking her to his lair.

There's little to no connective tissue between the various scenarios that Oscar (and, by extension, Lavant) has to carry out over the course of the film, which makes Holy Motors a disorientating, heady experience. One moment the film might be a social realist drama, the next it could be an animation, in yet another it could be a melodramatic, deeply sad musical co-starring Kylie Minogue. It's a film bursting with possibilities, and even though some of Carax's ideas work better than others - some are so brief they barely register as anything other than odd little diversions - the whole is peppered with so many delightful moments that it makes up for when an individual segment flounders.

Holy Motors feels like a collection of strange, beguiling shorts that happen to share a lead actor, and as such are dependent on that actor to lend consistency and drive to proceedings. Thankfully, Denis Lavant is more than up to the task allotted him. As versatile and flexible as the film that surrounds him, he adeptly and nimbly adapts to each mood and tone required of him, bringing a range and physicality to the role(s) that is almost more impressive than the film itself. Whether being quiet and subdued in the aforementioned father-daughter story or cartoonishly monstrous as the lime green suit-wearing, flower-eating, model-stealing, finger-biting rapscallion Monsieur Merde, he is never less than fully committed or convincing. Each character he inhabits feels as real and distinct as the others, and the sheer energy he brings to the screen elevates even the segments that feel a little half-baked or disposable. It's hardly surprising that the best sequence in the film, in which Lavant plays an accordion in an abandoned church as more and more people play alongside him, is the one driven most by his sheer exuberance in the moment.

Lavant's performance may, in fact, be key to discerning any meaning from the film, assuming there is any to be discerned. As he rides around in a limousine, as sure a sign of status and celebrity as any object can be, constantly adopting new, wildly dissimilar personae, he seems to be the embodiment of actors everywhere, as well as the concept of acting itself. As the film progresses, Oscar grows drunk and maudlin, seemingly worn down by his different turns and lack of anything in his life beyond each new hairpiece and scenario. Even though he is just playing a part, each one seems to take something out of him, either mentally or physically. It seems to get at the idea (best expressed by Peter Sellers on The Muppet Show) that actors are vessels for other peoples' lives, and that some of the best actors are able to inhabit roles because they are, on some level, empty vessels that need to be filled.

As part of his journey, Oscar encounters several people who seem to be doing the same job as him, albeit fulfilling different roles, which suggests that the purpose of this is to entertain some third party which could either be an audience within the world of the film (something which is hinted at) or the real audience watching at home, or maybe just the world in general. Perhaps his disaffection is just a reflection of a world in which everyone has multiple masks and personae that they have to maintain or hide behind at all times, all the while hiding a true version of themselves where almost no one can see them.

All of these could be true, though they could just as easily be completely wrong. The film offers no concrete explanation for itself, and at times it even seems to be mocking the audience for trying to make sense of it at all. The final two scenes in the film, in particular, feel vaguely satirical, as if Carax sat down to deliberately create moments that scream "THIS IS AN ART FILM" in the most ludicrous way imaginable. Even if he did not intend them that way, it almost doesn't matter because they're pretty hilarious either way. They may actually be funnier if he included them for any reason other than parody.

The surrealist aspects of Holy Motors might make it seem daunting or impenetrable, yet it is anything but. It's a crazy, nutty phantasmagoria brimming with passion and invention, and more importantly it's really fun. It perhaps doesn't hold up to much scrutiny, at least when considered as a strictly narrative enterprise, but rather as a loopy assembly of funny, melancholy and exhilarating moments that showcase the boundless potential of cinema. It's not a puzzle that needs to be solved; it's a ride that needs to experienced.