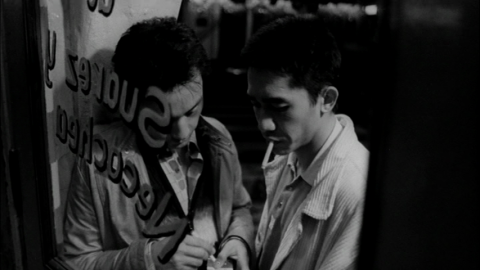 The cinema of Wong Kar-wai tends towards the romantic, both in terms of its stories and visuals. Chungking Express and Fallen Angels are about people falling in love and moving slowly, inexorably towards each other, and whether or not they end up together at the end is in some sense less important than the process itself. This is also true of his style, which replicates the sensory experience of modern life through its visual exuberance and, particularly in his earlier films, its kineticism and eclecticism. In his films, the images themselves tend to be as important - if not more so - than the events being depicted since they are key to getting across the atmosphere and texture of his world, which is one of love and the senses.

What's interesting about Happy Together, Wong's film about a gay couple (played Leslie Cheung and Tony Leung) traveling through Argentina, is how unromantic it is. The film begins with the two trying to escape their old life in Hong Kong and, in the process, save their relationship. Yet within minutes of being introduced, we see them fight and break up, and as Lai (Leung) tries to eke out a living as a doorman at a club, Ho (Cheung) begins a destructive spiral of drinking and random sexual encounters, both of which he flaunts in front of Lai, either for attention or just to spite him. It's a pretty stark and unvarnished look at a deeply dysfunctional relationship between two people who have very different ideas about what they want from it. Coming from someone known for being swooningly romantic, Happy Together is actually a great film about when love goes sour.

At the same time, the film still has that same sense that its characters are being drawn towards each other despite whatever obstacles might be in the way. In this instance, that obstacle is Lai, who spends most of the film desperately trying to stay away from Ho. Wong Kar-wai has other ideas. After a few weeks of trying to keep Ho out of his life, he turns up on Lai's doorstep badly beaten and in dire need of his help. This starts off a new cycle for the two, one suggestive of what their pre-Argentina life must have been like. It's a cycle of love, abuse, disintegration and reconciliation, and what makes the film heartbreaking for much of its running time is that not only do the audience know that things won't work out, but so, on some level, does Lai. He knows that Ho will just end up hurting him again, that the break up will leave him alone and depressed, but he can't stop himself from being drawn to him.

Much of what's great about the film lies in the performances by both Leung and Cheung, who make their characters feel painfully real. Without someone as likeable and charming playing Lai, the character could seem too pathetic or weak to warrant the sympathy that he deserves. Likewise, if Cheung wasn't so compelling and magnetic, it would be hard to see why Lai would be attracted to him in the first place. The film is such a delicate, intimate character study that the two are able to exhibit the best and worst of themselves without ever becoming completely inhuman. There's never much of a question of whether or not Ho is bad for Lai - it's clear from very early on that he can't stop hurting him and he probably won't ever stop - but enough of the good shines through to make it understandable why Lai would want to try again, even against his better judgement.

Much as the story found Wong exploring new ideas in an old way, the visuals represented something of a departure, even though the creator of them was unmistakable. Much of the film is shot in black-and-white, a stark contrast to the garish neon of his other work, but appropriate given the shift in location from the dazzling kaleidoscope of Hong Kong to dusty, sun-bleached Argentina. Colour does begin to seep into the film as the story progresses, but even then the film is much more restrained than most of Wong's other '90s films. It doesn't have the same restless quality that was so inextricably part of his style, and seems to hint at the direction he would go with his next film, the even more sedate and meditative In the Mood for Love. It's also only his second film not to revolve around Hong Kong's criminal underworld in some capacity, and as such is as much of a creative escape for Wong Kar-wai as it was an actual escape for his characters.

For all its darkness and discord, Happy Together ends on a note of cautious hope. Lai begins working at a restaurant and forms a friendship with a young man named Chang (Chen Chang), and develops a romantic attachment to him. The film remains ambiguous about Chang's sexuality, but the character comes to represent a new option for Lai, a life without Ho and their dance of love and hate. It's unclear whether or not Lai will ever be truly happy, but Wong ends the film in a way which celebrates that uncertainty, since it represents possibility and the hope of something different than what went before. What a beautifully appropriate way to start the New Year.
By Edwin Davies
Labels: 1990s, Argentina, drama, film, film review, hong kong, Romance, Tony Leung, Wong kar-wai
Newer Post Older Post Home