What Kind of Year Has It Been? 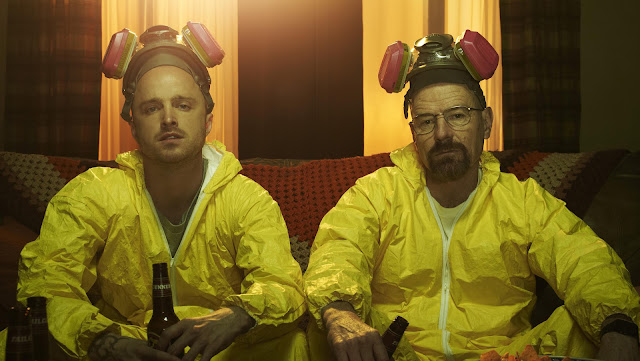 With 2012 rapidly receding and 2013 inexorably encroaching in defiance of the Mayans' will, it's time for reflection and the arbitrary ranking of art. Since I primarily write about films, I'll be putting up my Top 20 of the year up on January 1st as per tradition, but before then, I wanted to talk about the non-cinematic stuff that delighted and enchanted me this year.

Most of it's TV related because TV is still the most exciting medium going - compared to the admittedly fairly good year in cinema, TV had another banner year in a steady succession of them - and because I read precisely one book released this year (Nate Silver's The Signal and the Noise, highly recommended) but there's music, comedy and such mixed in as well so that the New Year can begin completely free of guilt over unacknowledged greatness.


Breaking Bad - Over its four seasons, AMC's mighty meth series has got considerable mileage from forcing its main characters into a corner, then watching as they try to squirm out of it. The fourth season ended with the removal of most of the impediments to Walter White's (Bryan Cranston) journey from mild-mannered chemistry teacher to the Southwest's premier badass, so the fifth season started with Walt in an unusually victorious state. Turns out the victory can be just as tough as the battle, and the first half of the show's final season found them overcoming new challenges with its typical mix of gallows humour, grim portent and unpredictable, brilliant storytelling. It also featured the greatest celebration of magnetism this side of The Insane Clown Posse, and that's got to count for something.


Parks and Recreation - NBC's critically adored, popularly ignored, probably not long for this world sitcom about the best damn civil servants ever took some big risks this past year, none more so than having Leslie Knope (Amy Poehler) run for a seat on the city council. It was a fairly major part of the fourth season and could have completely derailed the show, but its knack for sweetly funny moments overcame the occasionally misfired attempts at satirising local politics. Nowhere was this more apparent than the episode around the election, which managed to ring genuine tension from the results whilst allowing for the beautiful moment when Leslie broke down as she got to vote for herself. It remains television's warmest, funniest show, and I hope that it manages to stick around after the protective shields of The Office and 30 Rock disappear.


Louie, Season 3, "Late Show Parts 1-3" - Okay, I basically made this category up solely to talk about these episodes of Louie, so fuck you, it's my site. Anyway, the third season of Louis C.K.'s bleakly hilarious, hilariously bleak sitcom (?) was a step down from the heights of its second season,  - which, to be fair, meant that it was merely fantastic - but it ended strongly with this multi-part saga in which Louie (C.K.) is told that he is being considered as a replacement for David Letterman on the Late Show. Initially reticent, Louie comes to realise that this could be his big shot, and C.K. creates his own miniature, stand-up comedy-centred spin on Rocky, with David Lynch in the Burgess Meredith role. It was a funny, strange and ultimately beautiful story that probably could have stood apart as a great movie on its own (and was actually better than 90% of the actual movies I saw this year). Then again, we'd not get the chance to see something this amazing on television, so I'm happy to make the trade off there.


Community, Pillows and Blankets - Much like Louie, Dan Harmon's similarly genre-defining sitcom had a rough year, and whilst most of the traumas happened off-screen, some of the darkness worked its way into the series itself, producing a mix of ridiculously inventive episodes and some slightly less than stellar ones. But those inventive episodes were as great as many of the show's best, and none were as conceptually daring or hilarious as this pitch perfect homage to the style of documentary film-maker Ken Burns. Using Burns' usual bag of tricks - still photography, haunting music and interviews -  the show created a pastiche that would have been indistinguishable from the real thing were it not about a huge pillow fight.

Album of the Year


Ellie Goulding, Halcyon - Whilst no individual song on Goulding's second album has quite the thrilling surprise of "Under The Sheets" or "Lights", it remains a great pop album rife with songs of heartbreak, sadness and hope, all set to shimmering synths and undercut by her raw voice.

Song of the Year


Psy, "Gangnam Style" - Now, I heard better songs this year than "Gangnam Style". I heard songs that were more moving, better written and all around better pieces of art than "Gangnam Style". However, I can't think of a song that I had quite as much fun listening to as "Gangnam Style". From the moment a friend of mine posted the video on Facebook - back when it had only been seen a mere 20 million times - I felt an overwhelming urge to show it to people, to share my perplexed sense of wonder at this song. Even with all the parodies and the sheer over-exposure the song has received at this point, I still smile every time I hear it.

Comedy Album of the Year


Kyle Kinane, Whiskey Icarus - No comedian plumbs the depths of drunken sadness quite so thoroughly or entertainingly as self-proclaimed sassy janitor Kyle Kinane. He spends much of his second album describing situations which would be kind of horrifying told straight - such as getting so drunk he has to call a cab to take him to Wendy's - but turning them into hilariously bizarre vignettes through just the slightest change in intonation or throwaway aside. He truly is the Spalding Gray of getting dangerously drunk.


Comedy Bang! Bang!, "Episode #150: Time Bobby" - Scott Aukerman's improvisational podcast has been one of the most consistently brilliant examples of the nascent medium thanks largely to the loose, bizarre format, which allows for comedians to show up and free-associate and riff off of each other, in the process creating insane and delightful situations along the way. It reached a particularly high peak this year with this episode, in which Paul F. Tompkins plays Andrew Lloyd Webber and Saturday Night Live's Bobby Moynihan plays a stab-happy orphan named Fourvel (one less than Fievel). It's probably the best introduction to the show for newcomers, though no single episode provides a particularly easy entry point, and it defies easy description. It's just wonderful.