A Man out of Time: Timothy Dalton as James Bond 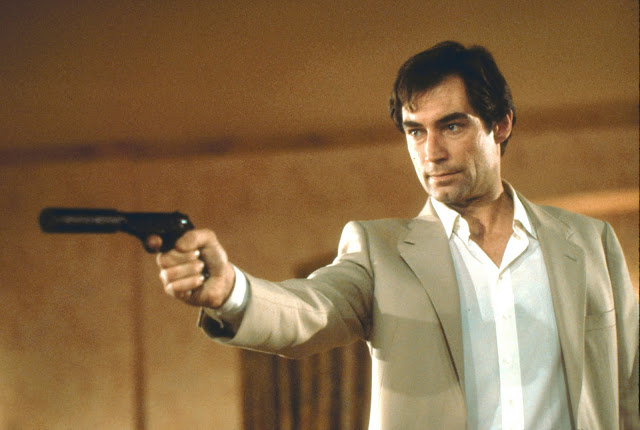 When Dr. No opened in October of 1962, few could have imagined that the series would still be a going concern fifty years later. Fewer still could have foreseen that the series would still be in robust financial health. Within three weeks of its release, Skyfall overtook Quantum of Solace to become the highest-grossing film in the series, far surpassing what the two previous Daniel Craig-fronted outings accrued, both worldwide and domestically. Though there is always the caveat of inflation to be considered - Skyfall has still got a long way to go to match the talliess of the top grossing Bond films when accounting for the rising ticket costs - that Skyfall is even getting close (at the time of writing it has taken a staggering $800 million worldwide) is nothing short of astonishing. It seems that the Bond franchise is stronger than it's ever been.

That was not always the case, though, as the series has faltered a few times over the last five decades. The most often cited example of a misstep being the casting of George Lazenby as Sean Connery's replacement, a decision that proved so disastrous that the producers had to coax Connery back to star in Diamonds Are Forever, before handing the role over to Roger Moore. But at least Lazenby's time in the tuxedo, brief as it was, is still talked about, albeit for almost entirely negative reasons. Even the most positive assessment of On Her Majesty's Secret Service tends to be along the lines of "it's a very good film despite having a complete charisma vacuum at its heart." (Incidentally, that would be my take on the film; it's really fun and has a terrific ending, but it could have been truly wonderful had it starred a better actor.) Lazenby was something of the sin-eater of the Bond series, someone who, by mere dint of being the first person to take over the role from another, absorbed the bile for all future Bond actors. In that way, he at least remains notable.

The same cannot be said of Timothy Dalton, who played Bond twice as many times as Lazenby did but seems to be talked about less than half as much. This is especially odd considering that Dalton was considerably better in the role than Lazenby, and was arguably the best actor to play Bond since Connery. Yet the two films that he starred in, 1987's The Living Daylights and 1989's License To Kill, don't seem to inspire the adulation or damnation that most of the other Bonds have enjoyed or endured. As time has gone on, Dalton has become something of the forgotten man of the series, which is a terrible shame, not only because his films are better than their reputation (or lack thereof) would suggest, but also because they presage the mood and tone of the Craig era.

There are certainly a number of interesting parallels between the two men and their subsequent portrayals of Fleming's spy. Both were relatively unknown to mainstream audiences prior to taking the role, both brought a greater physicality to Bond - Dalton, in particular, insisted on doing as many of his own stunts as possible - and both came on board at a time when the series had descended into campy ridiculousness, and as such were expected to help right the ship. It's no surprise that both The Living Daylights and Casino Royale are much more grounded (or as grounded as James Bond films can be) than their immediate predecessors, A View To A Kill and Die Another Day; both were deliberate attempts to shift the series away from outlandish gadgetry towards something a little closer to the origins of the character.

That approach certainly comes through in their respective takes on the character. Whereas Moore and Brosnan played Bond as a slightly aloof, sardonic figure who smirked his way through any situation, Dalton and Craig brought a world-weariness to Bond. This was especially true of Dalton, who played Bond not just as someone who had grown tired of espionage, but was just a step away from actively hating it.

This was an aspect of the character that had not been explored in the films much before, despite being a key component of the original stories by Ian Fleming. In an attempt to bring his interpretation closer to that of the source material, Dalton would often consult the stories on-set, in the process turning Bond from a detached playboy into a begrudging hero, a man trapped in his role and more or less resigned to it. Craig has followed suit in his portrayal, most notably in Skyfall, a film which is obsessed with showing the effects of age and weariness on Bond, but his performance is still underlined by a strong sense of duty, whilst Dalton's Bond seems more of a creature of habit. He is a spy because he always has been, and he wouldn't know how to be anything else. It's hard to imagine Craig going rogue in pursuit of a personal vendetta as Dalton does in License to Kill because, as much of a brute as he might be, he's still committed to a cause. Dalton, by comparison, is dutifully committed to a job that has long since lost its lustre.

Both interpretations are also marked by their more explicitly violent content, which rather starkly separates them from the other films in the series. The opening scene of Casino Royale, in which Bond brutally beats a man to death in a public restroom, would have seemed wildly out of place in any of the Pierce Brosnan films, if only because Brosnan lacks the sheer bulk that makes the scene credible, whilst Roger Moore might have thought twice before letting Benicio del Toro get ground up in a giant rock crusher. There's something sadistic, bordering on sociopathic about Craig and Dalton which makes it seem as if the films are daring the audience to root for them. They are heroes by comparison to everyone around them, rather than their own virtue.

Despite a small difference in overall attitude, the approach that the actors and the series took towards Bond is broadly similar, both in intent and execution, yet one interpretation has been the bedrock of three hugely successful films, whilst the other wound up being consigned to two of the least successful in the series. In terms of ticket sales, The Living Daylights is third from bottom, whilst License To Kill comes in dead last. Why do the results differ so wildly when the attitudes were so similar?

The fault lies less in the films themselves, but in their era. By the time that Dalton took over as Bond, the series had become synonymous with campy excess. Or, As Dalton himself put it, they were "too much techno-pop and had lost track of their sense of story. I mean, every film seemed to have a villain who had to rule or destroy the world." The lukewarm response to A View To A Kill necessitated a change. Albert Broccoli, the legendary producer who steered the series from Dr. No through to License To Kill, and his team tried to take the series in a new, more realistic direction that focused on smaller, less Earth-shattering stories. Yet as much as the people involved might have become disillusioned with the Moore Era, audiences had become used to it. They were used to Bond finding everything around him amusing and to each film being more daft than the previous one. That Dalton's films were criticised for their lack of humour speaks volumes about how unprepared audiences were for such a drastic shift in tone.

More importantly, action cinema and the world in general changed rapidly in the 1980s, as the likes of Stallone and Schwarzenegger made the idea of Roger Moore as an action hero look even more ridiculous than it was to begin with, and the end of the Cold War made the jet-setting espionage of the Bond series seem pretty antiquated. Dalton was more believable as someone who could throw or take a punch without breaking a hip, but The Living Daylights still wound up feeling out of step with both the down and dirty action films of the era and, with its focus on defecting KGB agents and secret Soviet plots, the post-Glasnost political climate. Meanwhile, its main attempt at relevancy, tying the events of the film into the Soviet war in Afghanistan, now looks pretty odd in retrospect, not unlike the "let's help the Taliban" plot of Rambo III.

License To Kill did a much better job of keeping up with the times by focusing on a story that had nothing to do with Cold War intrigue and everything to do with cocaine and drug smuggling, both of which were very much in vogue subjects at the time, and making the stakes much more personal for Bond. The only problem with that was that, as fine a film as License To Kill is, it basically isn't a James Bond film. If the same film had been made but James Bond replaced with another character entirely, it wouldn't make much difference. It also wound up being considerably bleaker in tone than most of the films it was aping, which took it too far the other way from where the Moore films ended up, and was probably too far of a departure for the series for even those who had liked The Living Daylights.

Unfortunately, and in another parallel between Dalton and Craig, the Bond series wound up being derailed by legal concerns, necessitating a long break between License To Kill and the next film, GoldenEye. Unlike Craig, who stayed with the franchise even during the years of uncertainty caused by the bankruptcy of MGM, Dalton decided to leave and pursue other ventures, never having the opportunity to further develop his take on Bond, and potentially headline a more commercially successful entry in the canon. At the very least, he would have had more opportunities to establish a reputation as something other than the man who played Bond between Roger Moore and Pierce Brosnan. Perhaps as Craig's version of the character gains in popularity, people will go back and discover that someone else tried to make Bond dark and violent, and even if they might not have made a huge amount of money doing so, they at least made films that were worthy additions to the series, ones that provided a blueprint for what the series could be.
By Edwin Davies
Labels: 2012, Casino Royale, Daniel Craig, film, James Bond, License To Kill, Skyfall, spy, Timothy Dalton
Newer Post Older Post Home