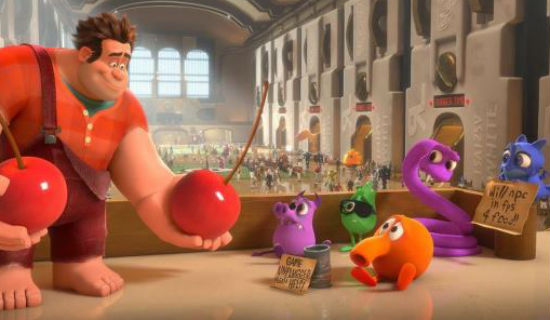 Videogames are built upon repetition. Collect the rings, drop the blocks, perform a Fatality, these are the foundation upon which an entire medium and accompanying culture have grown. Each time through, the players might get a little bit better, they might keep failing at the same point, but the mechanics of the game remain essentially the same. But what if the characters carrying out that repetition had lives of their own? What must it be like to have to go through the same limited selection of motions and actions every day? And what of the bad guys, the ones who throw the punches and the barrels, who spend their days being the focal point of constant anger and frustration? To paraphrase Camus, should we imagine Donkey Kong happy?

Disney's Wreck-It Ralph imagines that years upon years of being the villain would eventually drive someone to distraction, if not outright insanity. Ralph (John C. Reilly, whose voice is the audible equivalent of a hangdog expression) is the bad guy of a Donkey Kong style platformer where his job is to smash up an apartment building every day. It then falls to the eponymous star of the game, Fix-It Felix, Jr. (Jack McBrayer) to repair the damage, and at the end of each game the denizens of the building present Felix with a medal, then throw Ralph from the roof. This has been the way of things for 30 years, and Ralph just wants to be treated nicely by the people he works with. He might still live in a dump and get covered in mud, but he could live with that if he knew that people liked him.

All the characters in the different games around Fix-It Felix, Jr. are able to leave their homes at night and go to a shared hub to hang out and relax. It's on one such jaunt that Ralph sees his opportunity to improve his lot. He discovers that anyone who completes Hero's Duty - a first-person shooter clearly influenced by the likes of Gears of War - receives a medal for their endeavours, and if he gets a medal, he thinks he'll finally get the respect of the people in his game. Flush with purpose, he leaves his game and enters Hero's Duty, where he serves under the command of a fearsome leader programmed with a tragic back story (Jane Lynch). Despite his fear over how dark and scary videogames have become in the last three decades, Ralph gets his medal, but returning to his own game proves difficult. He winds up stuck in Sugar Rush, a quite literally candy-coloured racing game in the Mario Kart mould, and forms an unlikely bond with a small, precocious racer (Sarah Silverman) as the two make a deal to help each other. Meanwhile, Felix sets out to drag Ralph back to their game, for fear that Ralph's absence will lead to it being designated as broken, and subsequently unplugged.

The opening scene of Wreck-It Ralph, in which Ralph attends a self-help group for videogame villains (also in attendance: Bowser, Dr. Eggman, a zombie and led by a ghost from Pac-Man) who are trying to come to terms with their role as bad guys whilst not necessarily being bad guys, suggests that the film is going to be a Who Framed Roger Rabbit-style caper in which a selection of familiar videogame characters interact with each other. Whilst there is certainly that element to it, and the film is a treasure trove for eagle-eyed gamers who will get a giddy thrill from spotting Chun-Li walking with Princess Peach and Princess Daisy, or recognising the "alert" sound effect from Metal Gear Solid, it's more concerned with recreating the look and feel of types of games, rather than specific titles.

Fix-It Felix, Jr. has the simple design and limited colours of an 8-bit arcade game, Hero's Duty is nothing but dark greens, browns and eerie lighting, whilst Sugar Rush is a glorious assault of pinks and extravagant curves to accomodate its different tracks. (Not to mention, since everything in its world is based on different sweets and treats, candy-based puns.) Whilst some parts of the film suffer due to their environments - the Hero's Duty segment, in particular, is a little too frenetic to be funny - the attention to detail is undeniably impressive. There's also a strong focus on the rigid rules which govern videogames, and how even those who try to subvert them are still controlled by them to an extent.

In the process, this demonstrates that the people involved in making the film really know and love those games. There's a real sense that director Rich Moore and his team have paid a huge amount of attention not only to cramming the frame with background jokes and overt references to famous games, they've also paid attention to little details like having all the supporting characters in Fix-It Felix, Jr. move in the jerky style of 8-bit games, even when they aren't being animated in that style.  It's a small detail, but one that is indicative of the care that has gone into every aspect of the film. All of this combines to create a film which is packed with smart, funny moments that will leave gamers feeling all gooey and nostalgic inside.

Yet Wreck-It Ralph is not just an opportunity for children of the '80s and '90s to indulgence their well-established penchant for retrophilia and nostalgia. Much like Toy Story, its most obvious forebear, the wry jokes based on recognisable characters - or at least character types - from popular culture are built upon a solid, warm and heartfelt story. At its core, Wreck-It Ralph is the story of someone hoping for something better. It's a sweet movie that never becomes too sugary - quite an achievement considering about half of it takes place in a world that is literally made of candy - because it couches its emotion in adventure and excitement, but those elements do not occlude its essentially good nature.

Even though its very premise allows it to be visually exuberant and inventive, it never loses sight of the fact that it's about a bad guy who is tired of being bad. That's a poignant idea which makes the central relationship works, and which ultimately helps make Wreck-It Ralph the best animated film you're likely to see this year.