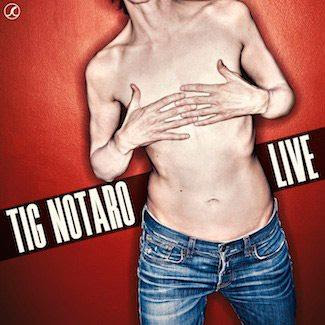 For fear of making a gross generalisation, I think it's safe to say that most people, if they were diagnosed with a life-threatening disease, would not make going onstage to talk about it to strangers a priority. Not only that, but I think that even fewer people would want to get onstage and perform comedy about the disease they literally just found out that they had. I mean, what with all the tearful phone calls and general despair, where would you find the time?

It turns out that Tig Notaro is not most people. In July of this year she was diagnosed with cancer in both breasts. It was sort of the capper to a year that had been steadily building in misfortune. First, she was hospitalised for pneumonia, the treatment for which led to her contracting a potentially fatal stomach bacteria named C.diff. Then, within weeks of leaving the hospital, her mother died after a fall at home, and she broke up with her girlfriend, in what amounts to about a decade's worth of bad news compressed into one four month period.

On the 3rd of August, mere days after revealing that she had been diagnosed, Notaro took to the stage of Largo in Los Angeles and addressed all of the recent events of her life in a set that was almost instantly hailed as revelatory by those in attendance. Louis C.K., who introduced Notaro that night, said that it was one of the greatest sets of comedy he had ever seen, and after determining that the set had been recorded, organised to have it released via his website in much the same way that he had put out his Emmy-winning stand-up special, Live at the Beacon Theater. That recording is now available as Live (as in "to live", rather than "live performance"), and it is every bit as astonishing as it has been made out to be.

The simplest way to describe Live is like a funny Book of Job. (Okay, a funnier Book of Job.) From the moment she walks onstage and introduces herself by saying, "Hello. I have cancer, how are you?" Notaro transforms her experiences into a tragicomic monologue that manages to touch upon the deep, penetrating hurt of the past year with a lightness of touch that makes each revelation even more shocking to her clearly stunned audience. The honesty with which she addresses her life is bracing, to say the least, and there is an undeniable tension in the air as she relates her troubles to a room full of strangers who had no idea what they were in for when they bought their tickets. There's not a consistent background of laughter throughout (some people who laugh are actually chastised good-naturedly by Notaro, who reminds everyone that she isn't that comfortable with her condition just yet) which would usually be a bad sign for a comedy show, but here is because the audience are so wrapped up in Notaro's storytelling.

They're so involved in the story that when, on the few occasions when Notaro asks if she should turn to more whimsical material for fear of making everyone so sad, the audience respond emphatically in the negative: they know that they are witnessing something truly unique and special. She transforms tragedy into catharsis in a way which is spellbinding. It's a confessional set that demonstrates Notaro's gifts as both a storyteller and a comedian as she drops in asides and jokes that run the gamut from light-hearted to painfully on the nose. It says something about how moving the set is at times that there as many sighs of sympathy as there are laughs, and the whole half-hour is an amazing balancing act between heartbreaking tragedy and humour as Notaro tries to make sense of everything.

This is best exemplified by a point halfway through when Notaro talks about how the hospital that cared for her mother in her last days sent a questionnaire to her house asking about her stay, even though she had died days before. It's a painfully funny routine that speaks volumes about Notaro's ability to see the humour in one of the worst moments of her life. It's indicative of a searingly honest set that rightly deserves every great thing that has been said about it. I've never heard anything quite like it.


Live can be purchased for $5.00 from Louisck.net, with most of the proceeds going to breast cancer charities. Not that you should need extra incentive to buy it because, if this isn't clear already, it's fucking great, but if you feel like you haven't been a good enough person today then this will fulfill your quota and then some.
By Edwin Davies
Labels: 2012, album, comedy, Louis C.K., stand-up, tig notaro
Newer Post Older Post Home