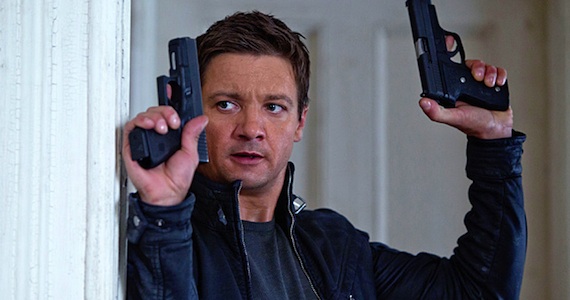 Robert Ludlum only wrote three novels featuring the character of Jason Bourne (1980's The Bourne Identity, 1986's The Bourne Supremacy and 1990's The Bourne Ultimatum) yet the character has had a remarkably virile literary and cinematic afterlife. Following the success of Doug Liman's 2002 film adaptation of the Bourne Identity (which admittedly bore almost no resemblance to the original novel) and with the permission of Ludlum's estate, Eric Van Lustbader revived the character for a subsequent five novels, with a sixth due later this year, continuing the story of the character far beyond what his creator intended.

It seems somewhat appropriate then that the fourth instalment of the film series should take its name from Lustbader's first Bourne novel, since the creation of that novel and this film are oddly analogous. Following the success of the original trilogy, director Paul Greengrass, who helmed Supremacy and Ultimatum, decided that he did not wish to return. Whilst the series had already survived a change of director once before, the subsequent decision of Matt Damon not to continue without Greengrass seemed like a fatal blow. Damon was already an established star - not to mention an Oscar-winner - before he appeared in The Bourne Identity, the success of the film fundamentally altered the way in which he was perceived, whilst his considerable charisma and physicality played a major role in turning Bourne into the archetypal action hero of the 21st century: a ruthlessly efficient killer haunted by his past. Even though he did not create the character, he was vital to the success of those films and became inextricably linked to the characterof Jason Bourne. With several of the key elements responsible for the series' success now gone, others would have to take over the films, much as Lustbader had done with the novels.

Rather than try to reboot the series from the beginning or continue the present chronology with a new actor playing Bourne, writer-director Tony Gilroy (who wrote or co-wrote all the previous films in the series) offers a somewhat novel approach by creating a film which is less a sequel than a spin-off, albeit one based around a character who did not exist in any of the preceding films. Set around about the same time as the events of The Bourne Ultimatum, the story revolves around Aaron Cross (Jeremy Renner), a member of a shady government program similar to the one that created Bourne, though in the case of Cross and his compatriots their mental and physical training has been augmented by chemical manipulation. After Bourne's actions threaten to uncover this program, the men in charge of it (played by Edward Norton, Stacy Keach and Scott Glenn) decide that it is time to cut their losses, and they begin killing off all their active agents along with anyone connected to the program.

Cross survives the attempt on his life, but without his meds he fears he will start to lose his mental and physical abilities. Fearing this outcome, he tracks down Marta Shearing (Rachel Weisz), a doctor who was responsible for monitoring the progress of agents in the program and, much like Cross, is now a target. Together, they set out to try to find a solution to Cross' chemical issues whilst avoiding detection by those pursuing them, creating a film that is an odd hybrid of The Fugitive and Flowers for Algernon.

The opening half an hour of The Bourne Legacy underlines how its unique selling point - that it is a part of the Bourne universe whilst existing as a separate story - also harms it, since the constant references to events and characters of the earlier films are so jarring they prevent the film from telling its own story. As it strains to connect the events of Ultimatum to its own story, the film groans under the weight of its own contrivance.

References to or restagings of moments from its predecessors - it even mimics the opening shot of The Bourne Identity by filming its main character floating in water, but without the central mystery of how the character got there - not to mention the near constant references to what Jason Bourne is up to off-screen, muddy the story of the actual protagonist. At the same time, these serve to make the film somewhat alienating to people unfamiliar with the broad strokes of what happened in the previous film.

Trusting that the audience are aware of the previous events is generally something to applaud, especially when the film in question doesn't go out of its way to explain every point (and when it allows for brief, welcome appearances by series veterans like Joan Allen, David Straitharn and Albert Finney). However, the connection to Ultimatum proves to be so tangential that nodding to that earlier, better film only hurts Legacy by comparison. The film trumpets its relationship to Jason Bourne, but in doing so makes his absence all the more keenly felt by highlighting that he isn't there, rather than focusing on the man who is.

Speaking of that man, Jeremy Renner is very good in the role and a more than adequate replacement for Matt Damon. He has both the charm and physicality to convince as an action hero, even if the stunts in the film occasionally veer into more ridiculous territory than the series has before, robbing it of the gritty, realistic touch that made them such crucial touchstones of modern action film-making. (Gone also is the frequently criticised "shakey-cam" of Greengrass' entries, which makes for a clearer but less exciting aesthetic.) The story itself does not offer much for Renner to do in terms of illuminating what drives Cross beyond his desire for the chemicals that will keep him super-human, but he does the best with what he has been given. By the end of the film he has unveiled enough of what makes Cross tick to make spending more time watching him dispatch pursuers in increasingly violent ways seem like a good idea, which is all that a relaunch like this requires. Rachel Weisz is also good, though as the love interest she winds up being more of a reactive figure than anything else, so other than serving as Cross' connection to his medication it's hard to say anything else about Marta Shearing as a character when she is more of a plot device.

The main problem with The Bourne Legacy, and the thing which ultimately undoes it, is that once it manages to get beyond establishing its credentials as a part of the Bourne family it doesn't have much of a story of its own to tell. The entirety of the narrative is concerned with Cross trying to get his medicine, but once he has achieved that it does not have anywhere else to go. He doesn't know who is following him accept in the broadest possible sense, which makes all the scenes of Norton leading the manhunt feel horribly disconnected. There's no mystery or suspense to the story because everyone knows everything that they need to from pretty early on. This may all be set up for future film in which Norton's character continues his pursuit, but the trade-off for that is that this film winds up feeling unsatisfying as anything other than a set-piece delivery system. There's nothing necessarily wrong with that, but it makes for a notable step down from its predecessors, all of which managed to deliver some thematic depth and cultural commentary between ass-kickings.

The previous Bourne films were all, at heart, conspiracy thrillers centred around the mystery of who Jason Bourne was, who was after him, and what he had done. The Bourne Legacy meanwhile is just a long chase scene. A kinetic, often exciting and engaging chase scene, but a chase scene nonetheless.