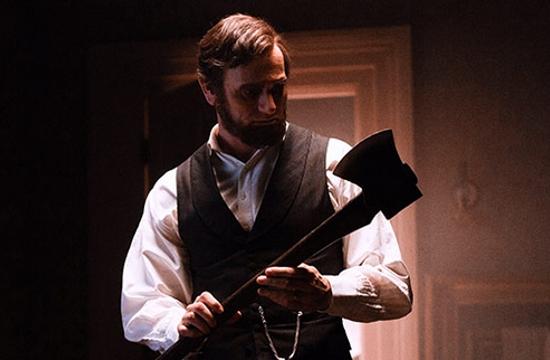 A synopsis of Abraham Lincoln: Vampire Hunter, the latest film from Timur Bekmambetov, seems somewhat redundant. With a title that self-explanatory, what more could you possibly need to know about the set-up? It's a film in which Abraham Lincoln (Benjamin Walker) is revealed to have lived a secret double-life as both the man who freed the slaves and as the man who freed vampires from existence. The two sides of the man eventually intertwine when Abe and his friend Henry Sturgess' (Dominic Cooper) personal battle against the malevolent Adam (Rufus Sewell) becomes far grander, and alters the course of American history.

Abraham Lincoln: Vampire Hunter is a silly film - with that title, how could it not be? - but it isn't, for the most part, a stupid one. A great deal of attention has been put into recreating the period setting and in fitting the vampire mythology around the events of Lincoln's life and presidency. Screenwriter Seth Grahame-Green, adapting his own bestselling novel, finds the gaps in the historical record and plugs them with plenty of Gothic imagery and invention.

The best implementation of this can be seen in the way in which the soon-to-secede states are depicted as lands under the thrall of vampires, and slavery as a means for them to maintain a steady food supply. The Civil War, then, becomes an extension of Lincoln's own war against the undead, since ending slavery would break the stranglehold of vampirism over America. It's a neat idea, though given what an emotionally loaded period of American history the film covers, it's hard to tell what, if anything, the film is trying to say, other than, "Wouldn't it be cool if..."

But that's completely fine. Abraham Lincoln: Vampire Hunter is a very shallow experience that washes over without leaving much of a trace. It glides along on moments of visceral coolness and heightened emotion, both of which it succeeds at realizing more often than it fails. And it undoubtedly does fail at times, particularly in its second half, once the story moves from young Lincoln's life as a clandestine slayer to his election as America's 16th President. (Though it's worth noting that the make-up effects used to turn Walker into the old Lincoln are incredibly well-done. It's a small matter, but worth pointing out to illustrate the general technical excellence of the film.)

As with any origin story, there's a certain boundless potential energy to seeing someone learn about a secret world, develop new skills, then use them to devastating effect, but once the film moves beyond that, it struggles to create any new forward motion to replace the momentum of discovery. When it does, by repurposing the slaughter of Gettysburg as the defining moment of not only the real War, but also that against the bloodsuckers, the film achieves a level of ridiculousness that it had spent the rest of its running time resisting. When it gives in, the shift is incredibly awkward, and rife with stupidity.

Timur Bekmambetov has always been a visual filmmaker, rather than a narrative one, and the best films he has made (though it's hard to think of them as particularly good) have benefitted greatly from his knack for creating insane action spectacle that makes little sense; think of the bullet-bending bullshit of Wanted; the moment when a character drives a car up the side of a building in Day Watch; or the moment when a villain in Night Watch rips out his own spine and uses it as a whip. These instances serve no purpose other than to be visually kinetic and arresting, which they are, and a strong story would just get in the way of all the insanely exuberant ludicrousness.

By comparison, Abraham Lincoln: Vampire Hunter is positively subdued. The needs of the story restrain Bekmambetov, allowing the drama to come to the fore, and for the solid performances by Benjamin Walker, Mary Elizabeth Winstead (as Mary Todd Lincoln) and Dominic Cooper to carry the film along. It is primarily in the moments when Bekmambetov resorts to his old tricks and opts to sacrifice logic and narrative for a stunning visual effect - such as the moment when Lincoln shatters a whole tree with a single swing of an axe, which looks cool but makes next to no sense - that the film falters.

Unfortunately, that description covers the entire third act. Once the focus shifts to Gettysburg and Lincoln and co.'s effort to thwart their undead enemies' plans to turn the tide of the war, the scale of the story expands drastically, and the film collapses under the need to provide a big finish, one which takes the form of a fight on a train which, whilst well done, seems to have been spliced in from another movie.

Until it crumples and gives into its own ridiculousness, Abraham Lincoln: Vampire Hunter is a slick, moderately clever and fun exercise in historical tomfoolery that has the temerity to take itself seriously. That will ultimately turn a lot of people off, since apparently genre films have to be winking and silly and self-referential these days, but, for this viewer, that balance worked just enough. The film falls at the last hurdle, but it runs most of the race smoothly and with little fuss.