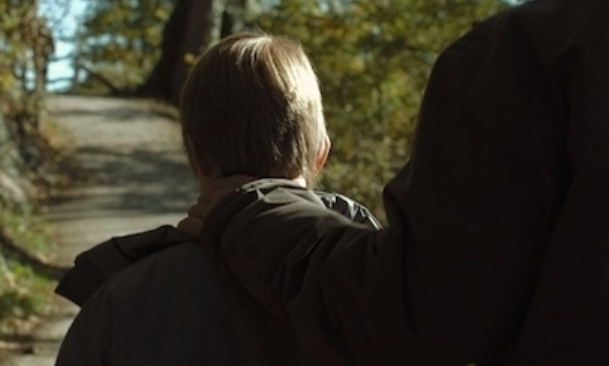 Michael (Michael Fuith) is a seemingly ordinary man living a seemingly ordinary life. He goes to work at an insurance firm, he keeps himself to himself and tries not to cause any trouble for anyone else. Yet Michael has a young boy named Wolfgang (David Rauchenberger) held captive in his cellar, and Marcus Schleinzer's film, Michael, examines the queasy and awful relationship that develops between captor and captive.

The film explores some incredibly disturbing subject matter in a very matter-of-fact style that makes it all the more uncomfortable: it treats something abhorent and evil in a way which is incredibly mundane. Whilst the actions of its central charcter are repellant, what gives the film its power to shock is the sense of normalcy that Michael creates around his relationship with Wolfgang. Rather than just keeping him locked in the cellar, Michael brings Wolfgang up so that they can have meals and watch TV together, they go on outings to a local park, and at one point they even sing Christmas caroles around a tree that Michael has bought for the occasion. Schleinzer's distant, deadpan style makes these scenes seem all the more horrible since there is no sense that the film is passing judgement on Michael, and the sense of voyeurism implicates the audience in his creation of a perverse impersonation of the father-son dynamic. It's a very unsettling experience.

It gets even more unsettling the more the film goes on, since the longer the film lasts, the less defined the relationship between Michael and Wolfgang becomes. There are a lot of subtle shifts in the way that they interact with each other over the course of the film - carried off brilliantly by the two actors - but the overall sense we get is one of resignation on Wolfgang's part to the physical and psychological domination that Michael has over him. Thankfully we see very little of the former - the abuse is never depicted, merely heavily alluded to - but the film gives just enough of an insight into the lies and manipulations of Michael to give us a sense of how completely he seems to have worn Wolfgang down. It's not clear how long Wolfgang has been Michael's prisoner, but there's a deadening sense of routine to their time together that suggests that it has been quite a while, and the way in which Wolfgang does not seem to resist most of the time speaks volumes about his attitude towards his situation without ever actually articulating it. As with much of the film, the worst things about it are those left unseen and unsaid, but merely suggested.

Yet that is also the biggest problem with the film since, for all its suggestion and implication, it doesn't really seem to have anything meaningful to say. It obviously drew some inspiration from the cases of Josef Fritzl and Wolfgang Priklopil, but it does not say why such a thing could happen, so much as just showing how it could happen. The greatest strength of Michael is its uncompromising willingness to merely examine its story and subject without comment, but beyond the surface of ambiguity there doesn't seem to be anything more meaningful happening. It's disturbing and oppressive in the moment, but once the film stops it becomes apparent that there is nothing in it that will haunt you afterwards, and that is exactly what it needs to do to be anything other than shocking.