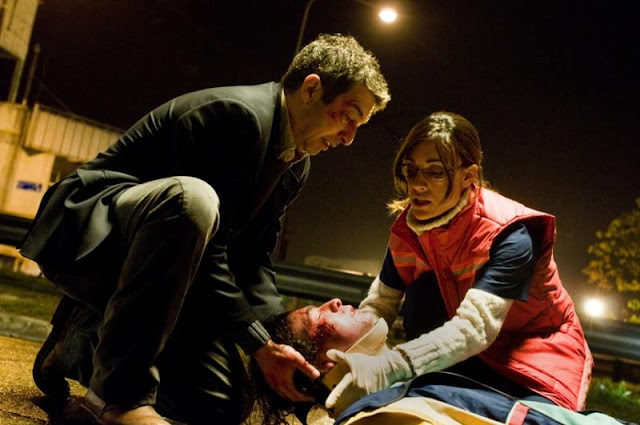 Pablo Trapero's Carancho (The Vulture) opens with statistics about the numbers of people who are involved in fatal or near-fatal traffic accidents in Argentina. After delineating the daily, weekly and yearly figures, it ends with the wry statement that "the compensation business is booming," before introducing us to Sosa (Ricardo Darin), an ambulance-chasing lawyer who is being beaten up at the funeral of a man who has been killed in an accident, and whose family don't take kindly to Sosa showing up trying to convince them to start legal proceedings before the body is even in the ground.

Right from the off, Trapero's film immerses the audience in its shady world of lawyers who convince the bereaved to sue for compensation, then pocket most of the money for themselves. Sosa is particularly fascinating in this context because he has an air of resignation to him. He's not wholly repellant in the way that some of his compatriots are, he's just someone going through the motions who has become deadened to the horror around him, as evidenced by his decision to head straight to the next accident even though he's still bleeding from the beating sustained from the victims of the last one. Once there, he meets a young doctor named Luján (Martina Gusman) whose relative naivety when it comes to the insurance industry causes Sosa to have a moment of personal realisation, and he sets about trying to extricate himself from The Foundation, the organisation he represents, and trying to woo Luján.

Considering that it is a film that features plenty of moments of terrifying brutality - from the opening scene of Sosa's beating to a gut-wrenching moment in which he tries to create an "accident" by breaking a man's leg and having him walk in front of a car to the half a dozen car crashes that occur at key moments in the narrative - the love story in Carancho is surprisingly tender and sensual. Darin and Gusman have terrific chemistry, best expressed during a scene in which they share a coffee and Sosa steals a kiss from Luján by betting on the number of cars who will run a red light outside. There's a lightness to their interaction in this moment that is largely missing from the rest of the film, which is appropriately bleak given the material but needs those moments of light and beauty to stop it just short of becoming suicidally depressing.

The underlying sweetness of their relationship in the first half of the film also gives a real sense of danger to the second, in which the two increasingly find themselves hemmed in by the corruption of the system around them, and any attempt they make to try to get some sort of justice for the ordinary people caught up in it is met with horrifying consequences. Trapero ratchets up the tension superbly, creating a nice contrast between the razor-sharp finale and the aimless mid-section, which loses sight of the central relationship in favour of exploring the moral maze that Sosa finds himself navigating.

This looseness wouldn't be such an issue if the film had not already explored that idea expertly within a tight genre framework to begin with. The sudden reassertion of the thriller trappings at the end provide a much needed boost, but that middle part of the film does diminish the furious power and energy of Carancho to an extent that it only just barely recovers.