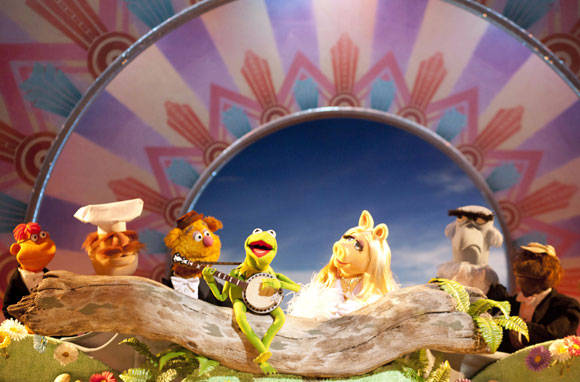 Every time an old cartoon or sitcom is dusted off and given the big-screen treatment, they tend to feel like such cynical cash-grabs, ones that are so completely devoid of love, wit or grace, that it's hard to imagine anyone involved actually had any genuine passion for the source material in the first place. No matter what they may say to the contrary, it's clear that the people behind The Smurfs and Alvin and The Chipmunks have no interest in making good films with characters that they actually have any interest in or affection for. The same could not be said of The Muppets, a film which radiates love for the work of Jim Henson from its very first frame to its rapturous finale.

The film begins with a lengthy prologue in which Walter (Peter Linz), a young man who has grown up in Smalltown, USA, talks about how The Muppet Show provided him with a sense of safety and comfort in his childhood since he was an awkward kid who never seemed to fit in.,mainly because he was perpetually two feet tall and made of felt, since Walter is a muppet who was born into a family of humans. His idolising of Kermit and co. lasts well into adulthood, and reaches its climax when Walter, his (also Muppets-obsessed, very human) brother Gary (Jason Segel) and Gary's girlfriend Mary (Amy Adams) head to L.A. to visit the Muppet theatre. Once there, they discover a musty old building that no one cares about, with the exception of oil magnate Tex Richman (Chris Cooper), who plans to buy the theatre once its lease expires, then tear it down so he can drill underneath.

Straight away, The Muppets side-steps the failings of something like The Smurfs by not trying to update the characters for a modern audience, instead rather smartly choosing to emphasise the irrelevance of The Muppets. By depicting the characters as relics of a simpler, gentler time when entertainment wasn't so harsh and unforgiving - an idea illustrated by a TV show called Punch Teacher in which, well, you can probably guess what happens - Segel and Stoller manage to make them seem vital and relevant again without cramming in a load of modern references. As far as Walter is concerned, the world needs The Muppets to bring back some of the idealism that has been lost.

That sense of wonder runs throughout the film, and it's clear that everyone involved genuinely loves these iconic characters on a level that goes far beyond brand recognition. Segel and Stoller's script gives the various Muppets plenty of individual moments to shine as Gary, Mary and Walter try to get the gang back together for a telethon to save the theatre. Kermit, who now lives alone in an old, mostly empty mansion, gets to be the reluctant leader; Fozzie, who now plays in a Muppets tribute act, gets to make tons of intentionally bad jokes (typical example: Walter: "September? But that's four months away!" Fozzie: "That's nothing, I once had to wait a whole year for September.") and Miss Piggy gets to be the diva that she truly is. There's a real sense that Segel, Stoller and director James Bobin want to give The Muppets a film that is worthy of them, and the care that has gone into ensuring that they never veer from the classic behaviour established in their past TV shows and movies is testament to that commitment. The Muppets never feels like a souped-up, flashy new version of the classic characters, but a new story for those characters which naturally follows on from the old ones.

Nowhere is this more evident than in the film's final act, which is pretty much a new episode of The Muppet Show that happens to be appearing on a cinema screen. After convincing a television executive (played by Ann Perkins! Rashida Jones) to give them time on the schedule for their telethon and "persuading" Jack Black to host, The Muppets finally have to actually put on a show. This part of the film features all the classic aspects of the series; plenty of back-stage panicking and drama, some wonderfully bizarre and varied acts (including a cover of Cee-Lo Green's "Fuck/Forget You" which will completely change the way you hear that song forever) and all the general mayhem that ensues when trying to corral a bunch of miscreants into putting on something as complicated as a variety show.

The crowning moment of the act is a oerformance of Rainbow Connection, the iconic song from 1979's The Muppet Movie, which expressed the dewy-eyed optimism and hippy idealism and Jim Henson so beautifully. The performance is done in full, completely straight-faced with not one trace of irony or kitsch to it. Much like the film itself, it's an earnest tribute to the work of Jim Henson made by people that adored his work and want to do right by it. It's a gorgeous, heartfelt moment in a film that hums with sincerity.

Yet for all the time and effort expended in making sure that The Muppets is worthy of its characters, it isn't a wallow in easy nostalgia. Whilst anyone who watched the old TV shows and films growing up will get something from the film that viewers new to The Muppets won't, it's a film that works for any audience. It has plenty of funny jokes that work for young kids, subversive, self-aware silliness for the adults and a good, solid story that is involving without ever over-shadowing the gags.

The Muppets is a rare thing. It's a mainstream film from a major studio which is completely bereft of cynicism and overloaded with a sense of warmth and joy that is infectious. It's an utter delight and a strong argument that films based on classic properties don't have be crass and dumb to appeal to the broadest possible audience when all they need to be is good. It's an absolutely marvellous film that does the Henson legacy proud.