Film Review: The Girl With The Dragon Tattoo (2011) 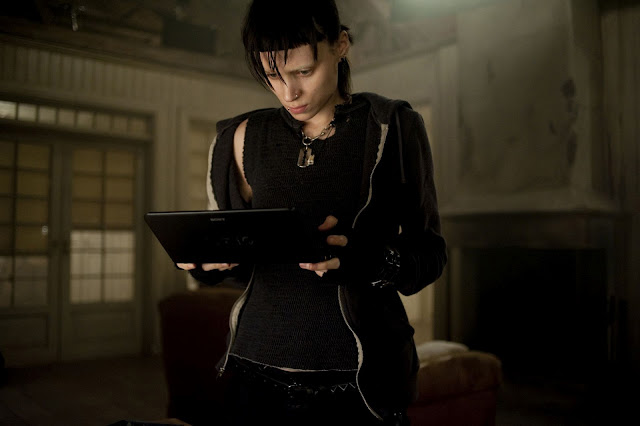 Stieg Larsson's Millennium Trilogy has proven to be that rarest of things, a literary blockbuster in an age when book sales seem to be perpetually in an irreversible tailspin. Not only that, but they have succeeded despite incredibly dark and violent subject matter, particularly aimed against women, which seems like it might render the stories unpalatable to a mainstream audience. Yet the success of the books - no doubt driven in part by the mystique cultivated around Larsson's death from a heart attack at the age of 50 - speaks for itself, as does the staggering success of the trilogy of Swedish television films based on the books which were released worldwide in 2010, to considerable acclaim. (For the record, I thought they were pretty unspectacular, though I liked the books well enough.)

So the new film version of The Girl With The Dragon Tattoo, the first book in the trilogy, arrives not only under the shadow of its source material, but also of the previous adaptation. Yet what's disappointing about Dragon Tattoo 2011 is not that it doesn't live up to the novel or the earlier film, but that it sticks too close to them, making only cosmetic improvements rather than addressing some of the problems which have plagued each successive version of the story.

The film begins with the trial of Mikael Blomkvist (Daniel Craig), a crusading journalist who has been found guilty of printing false imformation about a powerful Swedish magnate. Faced with crippling legal fees and afraid that the magazine that he runs with his lover (Robin Wright) will be tainted by his conviction, he takes a leave of absence. At the same time, he receives an offer from Henrik Vanger (Christopher Plummer), a man who says that he has valuable information that could take down the man responsible for Blomkvist's current problems. In exchange, he wants Blomkvist to investigate a 30-year old crime: his niece, Harriet, disappeared from the island where the Vanger family are based, and Henrik believes that she was killed by a member of his family who has spent the intervening years tormenting him by sending him flowers, a twisted recreation of something that Harriet used to do.

For the vast majority of its running time, David Fincher's film creaks under the weight of its own story. Larsson's dense, circuitous plot works perfectly in novel form since the reader has time to process all of the details piecemeal, but on film it all seems a little overwhelming. Steven Zaillian's script struggles to balance the numerous sub-plots and characters, especially since Fincher, in the interests of moving things along, rarely lingers on any particular scene or moment. This prevents it from ever really dragging - even at his worst, such as on The Curious Case of Benjamin Button, Fincher can make films that move at a decent pace - it also means that much of what happens has little notable impact. The story rattles along from scene to scene, never really giving a sense of who the characters are and making Blomkvist's deductive leaps seem like random stabs in the dark, rather than considered detective work.

The one character who does make an impact, as with both previous iterations of the story, is the character of Lisbeth Salander, the borderline-sociopathic hacker whose history of sexual and physical abuse at the hands of men she thought she could trust causes her to join Blomkvist in his hunt. The character was already realised to iconic effect by Noomi Rapace in the Swedish originals, but Rooney Mara does a more than ample job of following her. Mara's take on Salander is simultaneously softer and harsher than Rapace's: she lets the human side of the character show a bit more, particularly during the scene in which she seduces Blomqvist, which plays out in a much more tender fashion than in the previous film or even the original novel, but she also manages to imbue the character with a greater sense of menace.

The scene in which she enacts revenge against a man who does her a particularly terrible wrong is very difficult to watch - though it is appropriately tough given the scene that it is a response to - but even the scenes in which she merely threatens other characters have an underlying sense of threat and danger to them (in no small part due to the throbbing, atonal score by Trent Reznor and Atticus Ross). It takes considerable presence for someone so physically small to dominate everyone on screen, and Mara owns every scene she's in. Anyone who wondered what it was that Fincher saw in her performance in the opening scene of The Social Network that led him to cast her will walk away from The Girl With The Dragon Tattoo with little doubt that his instincts were correct.

Unfortunately, the problems lie not with Mara or Salander, but with the film that surrounds her. The film is at its strongest when it focuses on Salander's acts of vengeance, exploring the theme of evil being used to expel evil. The aforementioned scene of revenge is violent and disturbing, but all the moreso because it is presented in a non-judgemental way that asks the audience to make up its own mind about whether or not such horrific violence is right if used to right a terrible wrong. Once that aspect of the plot wraps up, the film moves to a far more generic serial killer mode, which culminates in a final showdown between Blomkvist, Salander and the villain of the piece that feels like it was dropped in from a very different film. Fincher tries to treat material that has the luridness of Seven with the seriousness of Zodiac, and the disconnect between the two prevents The Girl With The Dragon Tattoo from becoming a coherent work, especially when it so completely fumbles the finale, when its attempt to stare into the abyss causes it to veer into camp.

Fincher brings an undeniable sheen to proceedings, from the stylish Bond-esque opening titles sequence onwards, and the film is an undoubted improvement on its Swedish forebear, which suffered from a flat, disinterested visual style resulting from its origins on television. However, apart from making a prettier looking film with a prettier looking cast, he fails to make a better film. The structural problems remain, and ultimately undermine what should have been a compelling thriller by making it feel lumpen and uneven. For all the cosmetic improvements, The Girl With The Dragon Tattoo is still the same difficult, unwieldy story desperately in need of someone to come along and figure out how make it work anywhere other than on the page.