The film that scared me the most as a child and still does, sort of 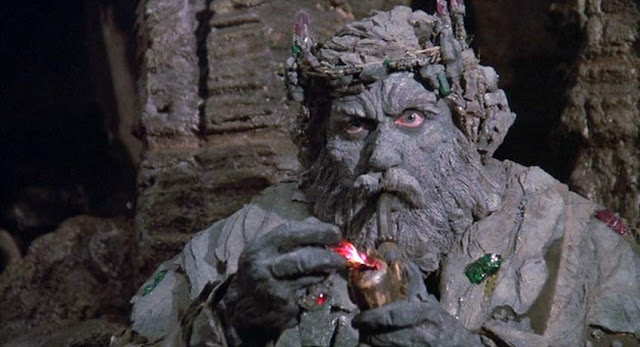 One of small pleasures of New Year's Day is seeing what old films the various terrestrial and digital channels dig out of their vaults to give a fresh airing since they don't have any original programming to fill the schedule. It's usually the same four or five old war films or comedies from the 1960s, but every so often an interesting little curio slips through. Such was the case this year, as Channel 5 decided to air a double-bill of The Wizard of Oz and its belated sequel, Return to Oz.
The Wizard of Oz was one of my favourite films growing up, and it remains one of a select number of films which I have to watch whenever I catch it on television. (The others, for point of reference, are Die Hard, RoboCop, Monty Python and the Holy Grail and Babe II: Pig In The City.) However, I had only ever watched Return to Oz two or three times, the last time being probably ten or eleven years ago, for the very simple reason that it is absolutely terrifying, and child-Me didn't want to experience it too many times.
Director Walter Murch, who is most famous for being one of the most acclaimed sound editors in the history of modern cinema, gave the film a drab and dilapidated look to match its plot. In the opening minutes of the film Dorothy (Fairuza Balk) is committed to a psychiatric hospital to receive Electro-Shock Therapy to stop her talking about the merry old land of Oz. At the moment when the Doctor is about to flip the switch, she escapes winds up being swept back in Oz in a flash flood. Once there, she discovers that the Yellow Brick Road has been overgrown by weeds, the Emerald City has been turned to ruins and a band of creatures known as Wheelers now roam the land, attacking and killing anything in sight.
As an example of a sequel subverting the iconography of its predecessor, Return to Oz stands more or less alone. (The only other example I can think of that goes further is Jean-Luc Godard's Alphaville, which tooj the character of detective Lemmy Caution and threw him into a science fiction world far removed from his usual contemporary noir setting.) It's the lucid nightmare to The Wizard of Oz's waking dream, one in which old friends are turned to stone, new ones are turned into ornaments and a world in which a corridor of screaming heads is only the sixth or seventh most disturbing element of the story.
Watched now, Return to Oz isn't quite the harrowing journey into darkness that it was when I was 8, but it's still striking how dark and weird and intense it is for a film ostensibly aimed at children. I am very much of the opinion that children can handle darker stories than most adults think they can, but I don't know how many kids could handle the sustained darkness of Return to Oz without coming away a little bit traumatised. I can't remember my first viewing exactly, but I imagine there must have been a fairly awkward moment when I asked my parents to explain just why the adults were planning to shoot hundreds of volts of electricity through Dorothy's head, which is the sort of real-world barbarism that makes the fantasy of Oz seem positively mild in comparison.
This got me thinking about the moments in films I watched as a child which still strike a chord with me years later. There are plenty of moments in Return to Oz that strike me as creepy now, but none of them really resonated with me in a way that suggested a lasting connection between myself and the film. I'd actually forgotten a surprisingly large amount of the events in the film, which is not something you would expect to happen with something that genuinely terrified me at a younger age. For example, I can very clearly remember the feeling of terror when, at the age of 6, I got lost in a supermarket when I decided that I would walk around with my eyes closed to find out what it was like to be blind. I was only actually 'lost' for about two minutes, if that, and my mum was only in the next aisle, but the sense of sheer panic is something I can recall very clearly. I didn't have any similar rush of memory when watching Return to Oz.

It didn't take me long to pinpoint the single moment in a film from my childhood that still creeps me the fuck out today. It scared me half to death the first time I watched it and it still makes my stomach drop every time I watch it, even though the film around it isn't anywhere near as constantly harrowing as Return to Oz. The film I am talking about is Robert Zemeckis' Who Framed Roger Rabbit.

Having worked out that Judge Doom (Christopher Lloyd) was responsible for the death of Marvin Acme, owner of the deed to Toontown, Eddie Valiant (Bob Hoskins) confronts him and his Weasel henchmen. In the ensuing fight, Doom gets stuck to the floor of Acme's warehouse as a steam roller slowly advances towards him. Then this happens:

It's pretty much the perfect combination of things to scar young minds; a man gets run over by a god-damned steam roller, turns out to be a maniacal, murderous cartoon character with glowing red fiery eyes, then that voice kicks in. I think it's the gradually altering pitch of it that still sets my teeth on edge nearly twenty years after I first watched Who Framed Roger Rabbit. The way that genial, if weird, Christopher Lloyd turns into a shrieking harpy, reaching a crescendo on the pointedly enunciated line, "Remember me, Eddie? When I killed your brother. I talked just, like, THIS!" It's chilling.

Everything about Judge Doom's unveiling is calculated to create a sense of dread and, well, doom, and the relatively light-hearted crime mystery that surrounds it only heightens how creepy and weird the scene is in comparison. I've seen many films that I would consider scarier than Who Framed Roger Rabbit, many that I would consider more disturbing and genuinely horrifying, but there are very few moments in them that get under my skin in quite the same way that Judge Doom's braying voice does.

Who Framed Roger Rabbit is the film that scared me the most as a child, if only in one very specific scene, and still does now. What films from your childhood still have the power to creep you out?
By Edwin Davies
Labels: 2011, Disney, Editorial, film, Return To Oz, Robert Zemeckis
Newer Post Older Post Home