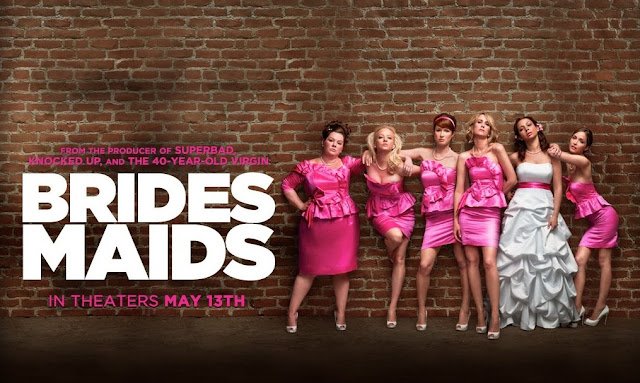 Paul Feig's film Bridesmaids arrives amidst a flurry of hype that proclaims it to be not only an uproariously funny comedy, but also a feminist cause celebre which it is every woman's duty to see, lest they lose the right to vote. Hyperbolic, perhaps, but not a million miles away from the tone of some of the more fevered reviews of the film, which are more or less hailing it as a new dawn for women in comedy. It is understandable, since we live in an age in which Kate Hudson is still working, so to find a film centred on a group of women which is well-written, heartfelt and genuinely laugh-out-loud funny is nothing short of miraculous.

Annie (Kristen Wiig) is a woman in state of personal and professional crisis. She's working at a job that she hates because her bakery, a business which she put her heart and soul into, closed down on account of the harsh economic conditions; she is involved with a man (an uncredited, and very funny, Jon Hamm) who has no interest in making their relationship about anything other than sex and next to no interest in Annie as a person; and her mother (the late Jill Clayburgh) keeps asking her if she will move out of her apartment to come and live with her. Things reach a crisis point when Annie's best friend Lillian (Maya Rudolph) tells her that she is getting married, and Annie discovers that Lillian has a new friend named Helen (Rose Byrne) who is richer and prettier than her and seems intent on upstaging her at every possible opportunity.

Whilst watching Bridesmaids, I couldn't help but compare it to the Sex and the City films, particularly the inexecrable second instalment, and wonder at how Bridesmaids is in many ways the film that fans of the Sex and the City TV series hoped they would get when Carrie et al. moved to the big screen. It's an ensemble cast of women being funny (and let's nix all talk of gender divides right here and now; Bridesmaids is funny regardless of whether you're XX or XY) whilst dealing with real problems, rather than just empty lifestyle porn about shrill, soulless harpies. The engine of the film is Annie's friendship with Lillian and the feelings of fear and inadequacy that arise as Annie starts to feel that her best friend is going to leave her behind whilst her life is stuck in a rut. The feeling of being stuck in neutral whilst all around you seem to be speeding by is one that most people will experience at some point in their lives, so it's not difficult for us to sympathise with Annie as she grows increasingly more frustrated by Helen's relentless campaign of passive-aggressiveness. She just wants to do right by Lillian, but she does not have the means to compete.

Although the film is an ensemble piece - with Rose Byrne being a great foil for everyone around her and Melissa McCarthy diving headfirst into a fearlessly filthy role as a fellow bridesmaid - it is primarily a showcase for Kristen Wiig's considerable talents. (Which is hardly surprising since she co-wrote the screenplay.) Wiig is a great physical comedian in both a big and a small sense. She can do big, goofy things like try to lift a giant cookie and fail miserably, and the film finds plenty of opportunities for her to do just that, but most of the best jokes in the film often come from the expressions that she pulls in response to everything going on around her. The script is full of great moments in which she quietly undercuts the ridiculousness of what someone else is saying, as well as big scenes, such as one in which she gets drunk on a plane, that allow her to be a bit more outrageous. She also gets a genuinely sweet little romantic subplot with Chris O'Dowd as a highway patrolman that is funny, charming and, at times, just a little bit heartbreaking. It's great to finally see her land a role that suits her particular sensibilities, even if it was one that she had to write herself.

The variety of humour on display in Bridesmaids is what makes it feel so refreshing in comparison to most comedies. There are moments of quiet character interaction, and their are moments of very broad physical comedy. There are scenes in which Wiig and Byrne square off with each other as each tries to be more subtly passive-aggressive than the other, and there are scenes of fairly crass toilet humour. Not every kind of humour worked for me - I really could have done without the scene in which various members of cast suffer the effects of food poisoning - but I really admire the fact that the film tries to appeal to the widest possible audience by providing a little something for everyone, rather than just aiming for the lowest common denominator. It doesn't think that its audience is too dumb to understand all the little character moments, nor does it feel that it is above a fart joke here or there.

Most importantly, Bridesmaids is a film that has heart, and one that seems to actually care about its characters. Like the best Judd Apatow productions, the film feels inclusive, and you get the sense that the lives of even the most minor characters could continue as separate films after the main feature ends, and that they would still be entertaining and interesting. Even Helen, who is a pretty awful human being in a lot of ways, gets moments that indicate why she is the way that she is, and which suggest that she might have her own problems. By the time that the film ends, you feel as if you have gotten to know these characters and there is something really uplifting about seeing them come together for Lillian's wedding. Yet unlike a lot of films of this genre, it doesn't end by saying that everything is going to be alright, that Annie will open another bakery and be a success, that she will find love with someone who isn't a total dick, or that she and Helen will be friends, but it merely leave those things as tantalising possibilities. At their best, Apatow productions convey the open-ended hopefulness of life itself, a quality which Bridesmaids has in spades.
By Edwin Davies
Labels: 2011, Bridesmaids, comedy, film review, Kristen Wiig
Newer Post Older Post Home