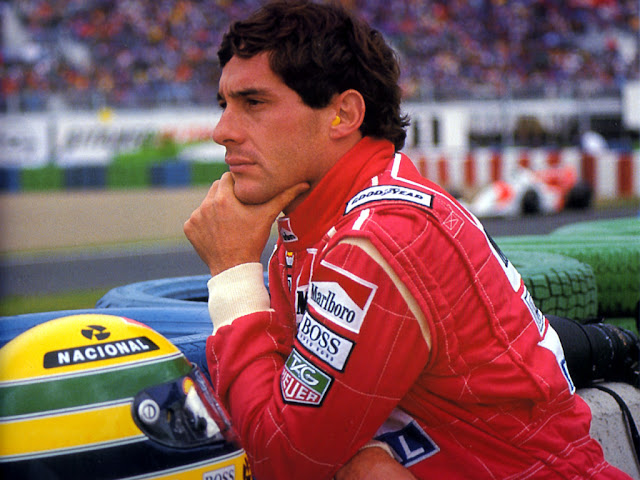 I'm going to be up-front here, and admit that I have little to no interest in Formula One. I know a few things about it. I know who Michael Schumacher is; I know that Bernie Ecclestone is involved somewhere; I know that there are sporadic uproars in the press over who can advertise what on the cars. That's about as far as my knowledge extends. So, when I say that the documentary Senna, about the life and career of three-time World Formula One Champion Ayrton Senna, is probably the best film I have seen this year, don't think that my judgement has been clouded by a love of the sport. Nothing could be further from the truth.

Asif Kapadia's film presents the story of Senna using solely archive footage, over which are played interviews with Senna's family, friends and his fellow drivers, journalists and commentators, and Senna himself. Straight away, this removes the sometimes distancing artificiality of most documentaries; why cut away from some exhilarating footage of Senna tearing around a track to show someone being interviewed in a living room when you can just play that interview over the footage? It creates an intimacy with Senna as a subject that extends both to the intense and harrowing in-car footage of his races and the more intimate footage of him relaxing at home.

More importantly, Kapadia and his editors use the footage and interviews to tell a coherent and compelling story of a man trying to beat the system. Senna is, amongst other things, a celebration of pure sporting prowess, and the version of Ayrton Senna that comes across is an intelligent, passionate and sublimely talented young man who lived for the sport, but hated the politics and money that surrounded it. Contrasted against him is his Maclaren team-mate and rival Alain Prost, whose skills as a driver were far outshone by his ability to play the game by manipulating points and political connections to get his way. The rivalry between the two men forms the backbone of the film for the most part, and the races and press conferences used to define their personalities are fraught with tension and seething resentment. Mozart and Salieri driving at 100mph.

Like all great sports movies, Senna finds transcendence in the escape that sport can give, not merely to those who practice it, but to those who live vicariously through it. At the time that Senna rose to prominence, his home country of Brazil was wracked by almost unprecedented economic, social and political unrest. Though Senna himself came from a comfortable background, and the escape he found in the sport was, if anything, more spiritual or religious than economic, for the millions of Brazilians who watched him race every week, he was the one thing they could take pride in. Towards the end of the film, a brief snippet of an interview with an ordinary Brazilian woman is included in which she says that Brazil needed education, food, health and joy. For all those who had nothing else, Ayrton Senna was their joy.

And it is easy to see why. Even to someone as ignorant about the sport as me, I could tell that his style was quite special. It's clear that he pushed himself and his car to do things that no one thought possible, even winning the 1991 Brazilian Grand Prix despite the failure of his gearbox meaning that he had to complete the last laps in sixth gear. Hearing the sheer joy in his voice as he wins on his home ground, it is easy to see why Brazil and the world fell in love with Ayrton Senna; he was a brilliant driver whose exuberance and lust for life coursed through his entire being.

It makes the moments in which he is outmanoeuvred by Prost's machinations or the introduction of computerised technology all the more heartrending because we can see how much the losses hurt Senna, not because he is a sore loser, but because he was beaten at a game that was fixed to begin with. The times when he does win are some of the most purely exultant that I have ever seen in a film, whether they consist of him winning his first World Championship or managing to get other drivers to support him in a vote on track safety.

I have avoided talking about the one aspect of the film that people who know about Senna will have expected to read about since I know that there are people out there, like me, who might not know enough about the sport to be aware of it. To those people, I say that they should absolutely see Senna, not because it is a great sports film, but because it is a great film, full stop. It is a brilliant and beguiling portrait of a great man, and one that everyone should watch. It's a vital and compelling piece of film-making.