My thoughts on 'Watchmen' and the nature of adaptation 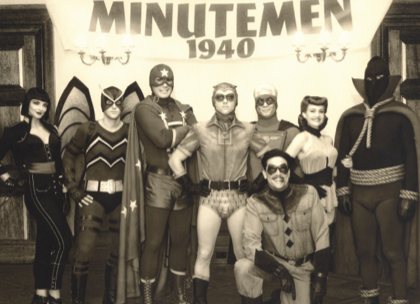 A few weeks ago, in preparation for watching Zack Snyder's Sucker Punch, I decided that I was going to do something that I had managed to avoid doing for the better part of two years; I was going to sit down and watch his adaptation of Alan Moore and Dave Gibbons' seminal comic, Watchmen.

I hadn't avoided it through a lack of opportunity - the film even played at the cinema that I work at for two weeks, so I not only could have seen it at the time of release, but could have done so for free - but through a conscious effort on my part. I did not want to watch Watchmen. The comic is one of my favourite books, comic or otherwise, and I'll admit that a certain fidelity to the source material played a part in my decision. (Not to mention a fantasy I briefly entertained of one day meeting Alan Moore and being able to say that I, like him, had never seen the film.) More importantly, though, I just didn't want to be a part of the cultural conversations that would spring up around the film. It seemed destined to prove so divisive amongst fans and non-fans alike that I thought the best thing would be to sit it out, rather than take sides.

As time passed, I realised that it was a pretty petulant tack to take. For better or worse (and I would argue much, much worse) Zack Snyder is shaping up to be one of the more important Hollywood film-makers of the next decade. (Though the back-to-back rejections of Legend of the Guardians: The Owls of Ga'Hoole and Sucker Punch - which I wound up not even watching because I've got many, many better things to do - does make that seem less of an inevitability now.) I'm almost certainly going to see his version of Superman when it comes out, and probably whatever else he puts out, so I couldn't justify not watching one of his major works to myself anymore. So, I watched Watchmen.

I thought it was okay.

Not a great film, not a terrible film, just a fairly mediocre film that passed a few hours. I liked some aspects of it. It looked very pretty, and the production design throughout was pretty astonishing. The performances varied wildly from great (Jeffrey Dean Morgan and Jackie Earl Haley) to the truly diabolical (Malin Akerman and Matthew Goode, who I generally like in other things) and most of the actors managed to do justice to the big moments from the comic. Ultimately, I walked away thinking that it wasn't as bad as it could have been, and that I never wanted to watch it again.

And that was how I planned to leave it. In fact, the reason why I didn't write a review of it when I watched it was because I just didn't feel that strongly about it. I do this for the sheer joy of writing, not for any great monetary gain, so why should I spend my time writing about a film I didn't feel strongly one way or the other about if there was no remuneration involved? It wouldn't be especially fun for me, and I don't know how edifying it would be for people to read. It seemed only sensible to leave it be.

Then yesterday, whilst pawing through my copy of Dave Gibbons' very good, if lightweight, Watching The Watchmen, I was struck by a remarkable revelation:

This was actually quite shocking to me. As I said, I didn't really care that much after my one and only viewing, so the vehemence with which this thought flitted through my mind was genuinely jarring.

There were certainly things that bothered me the first time through, chief amongst them being the way that the film fetishises violence, which is completely at odds with the themes of the comic. In the comic, Moore and Gibbons depicted their superheroes as very fragile and human, and the violence they meted out was appropriately brutal. You really felt every impact when reading the comic because it was realistic, and the fight scenes were exciting because the people involved weren't radioactive supermen but flesh and bone humans who could get very badly hurt. The film, on the other hand, turns the characters into exactly the kind of super-strong badasses handing out stylised beatings that Moore and Gibbons were deconstructing. But this didn't bother me that much because I just didn't really care about the film enough to get worked up about it.

Thinking about it today, I realised that it was Gibbons' book that spurred this thought on, and I'd like to try to get across just what it is about Watchmen that I just can't stand. Reading Watching The Watchmen, in which Gibbons details the process of working with Alan Moore to create the comic, both in the mundanely technical aspects and in the almost alchemical creative leaps that they both took, I was suddenly aware of just how much the work meant to both men, and how much of themselves they invested in it, with no possible expectation that it would go on to be a huge commercial success and alter the very idea of what a comic book could be. Though I found Watching The Watchmen to be a bit superficial, not to mention crucially lacking in input from Moore, whose thoughts I would have loved to have read, there is something very heartwarming in seeing how much it still means to Gibbons so many years later. It's his work as much as it is Moore's, and that personal connection shines through.

Watchmen, by comparison, is about as impersonal a film as I have ever encountered. One of the aspects of the film that it is most celebrated by its supporters is how faithful it is to the comic, with Snyder even going so far as to use the original panels as storyboards for the film. That could be considered a devotion to the source material, but I think it's just outright laziness. It's okay for film-makers to occasionally lift panels straight from the comics as a nod to fans - Sam Raimi's Spider-Man 2 does this brilliantly when it recreates the famous image of Spider-Man's discarded suit lying in a trashcan as Peter Parker (Tobey Maguire) walks away - but to say that a film is a great adaptation because it copies its source scene for scene would be like me saying that I wrote a great book because I transcribed The Great Gatsby word for word. Technically, it's correct, but other than my messy handwriting, I can't say that the resultant work has anything of myself in it.

That, ultimately, is my main problem with Watchmen; it may have ambition, but it completely lacks imagination. Snyder brings nothing to the film that wasn't already in the comic, apart from a brilliant opening credits sequence and a new ending (which I think makes more sense for a film), and I personally don't think that a film version of a work that slavishly adheres to the original is a good adaptation. Watchmen, the comic, already exists, so what I want to see is a version that has the vision and stamp of someone else upon it, something that turns something I am hugely familiar with into something startlingly new. When I watched Watchmen, I did not see Zack Snyder's bold new take on the story, just a bad facsimile of Alan Moore and Dave Gibbons' vision.
By Edwin Davies
Labels: alan moore, Dave Gibbons, film, film review, Watchmen, zack snyder
Newer Post Older Post Home