Doctor Who - The Almost People (S6E6) 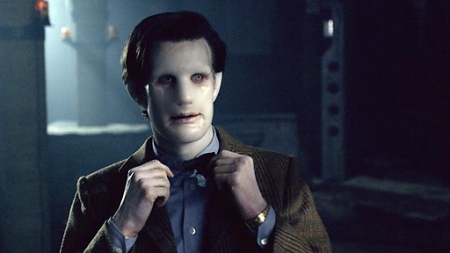 First off, I'd like to thank Neil for doing such great work covering for me whilst I was on holiday. I thought he did a terrific job of dealing with the themes of two really fantastic episodes. (For the record, I'd agree with him that The Doctor's Wife is one of the best episodes that the show has ever done, but felt that The Rebel Flesh was a slight, but only slight, step down in quality. I'd have probably given them 9/10 and 8/10 respectively.)

So, when last we left our heroes, they had arrived at a 13th-century monastery that was pumping out Dusty Springfield songs and incredibly strong acid. The monastery was being used by an army-controlled organisation to mine the acid, and the miners use "Gangers", avatars made from a substance called The Flesh, which they imbue with their personalities and memories, safe in the knowledge that should they fall into the acid, only the Flesh will be destroyed. Unfortunately, a solar storm hit, which caused all of the Gangers to become separate entities filled with fear, anger and overwhelming existential angst. Humans, in other words. At the end of the last episode, the fear and mistrust from both sides led them to a point of conflict at pretty much the same point that the island started to fall apart from all the acid that was leaking everywhere. Oh, also, there was Doctor-Ganger walking around, which was pretty cool.

WARNING: Spoilers for the film Moon.

One of the themes of "The Rebel Flesh" which I liked a lot was the idea of the company behind the monastery being quietly and malevolently evil. As Neil pointed out, there was a lot of Alien's Weyland-Yutani Corporation in the episode's depiction of an organisation that is not entirely honest about the way that they could conduct business. The idea of using surrogate creations to do dangerous work also recalled Duncan Jones' Moon, which explored very similar ideas about whether or not a clone, which is what the Gangers are, can have a soul of its own if it has been created from the memories and experiences of another person. The very best moments in "The Rebel Flesh" were the ones in which the Gangers remembering their pasts whilst also realising that they aren't really their own. (The scene in which one of the Gangers remembers 'his' son's birthday was particularly poignant in that regard.)

This idea was played more for laughs at the start of "The Almost People" when The Doctor-Ganger relives the past lives of his various incarnations, complete with quotes from Jon Pertwee ("reverse the polarity of the neutron flow!") and even little clips of Tom Baker and David Tennant thrown in there for good measure. I liked that scene, and I loved pretty much every scene of Matt Smith playing against himself and getting to show the sheer fun that The Doctor has when he gets to experience what it's like to hang out with him, but there weren't really any moments in the episode that had the emotional or philosophical import to them that some of the best moments in "The Rebel Flesh" did.

However, that's kind of the whole point of two-parters in Doctor Who, or at least when it comes to the good ones. The first episode is generally all set-up in which the new characters are introduced, the situation is established, and right before the credits role everything just goes to hell.

In that regard, "The Rebel Flesh" and "The Almost People" work as one of the very best two-parters that the revived series has ever done, since the two halves complement each other so very well; all the character-building in the first half meant that plight of the Gangers had a great deal more dramatic heft behind it in the more adventurous second episode. The fear and mistrust that the humans show toward The Doctor-Ganger purely because of what he is, even though what he is is a copy of the best person you could possibly want a copy of, felt less of a dramatic contrivance because it felt in keeping with the theme of the previous episode. Similarly, the death of the human Jimmy, having established an emotional connection with his Ganger over 'their' son, was an incredibly powerful moment because of all the work the show had gone into setting the metaphysical ramifications of The Flesh.

One thing I liked, but wasn't really entirely sure of, was the fact that The Doctor and The Doctor-Ganger tricked Amy into thinking that they were each other. On the one hand, it was thematically apt that the question of what it means to be human should be pushed to the very extreme by having Amy treat The Doctor, her Doctor, differently because she thought he was a Ganger, and it has ramifications for the series arc which I'll get to later, but it seemed like a weird thing for The Doctor to do. It felt like he was trying to teach her a lesson, and even though the explanation given made sense, it also seemed a little too on the nose. Not as on the nose as the scene in which the Jennifer-Ganger gives voice to the theme of the episode by saying, "Who is the real monster?" but it was pretty on the nose nonetheless.

In its final act, the episode revolved around a series of noble sacrifices which sought to blur the lines between Gangers and humans; Jimmy dies when he is hit by acid, then says that his Ganger can take his place and raise his son, Human Buzzer closes a door to stop the mutated Jennifer-Ganger killing everyone, but can only do so by trapping himself on the wrong side of the door, and both the Cleaver-Ganger and Doctor-Ganger choose to die to save everyone else. They give a very real cathartic release after all the more intellectual pondering of the rest of the story, and give weight to what The Doctor says as he leaves the survivors at a hearing about the misuse of The Flesh. "People are good. In their bones, truly good." It's a message that Doctor Who as a series repeats over and over in one form or another, the idea that humanity as a species has the capacity for great and beautiful things, and I always find it very resonant. Here, it felt especially well earned.

Speculation: Finally, an explanation for the Window Lady! So, the reason Amy's been seeing glimpses of her is that the Amy we've been following since the start of the series was really a Ganger, and the real, very pregnant Amy has been held by the Window Lady. Next week should be very exciting.

So, was The Doctor that Amy talked to about seeing The Doctor die The Doctor, or the Doctor-Ganger? Since we don't know exactly when they switched shoes to trick Amy, that means that either she hasn't told him that she saw him die, or she has. I don't think that scene between them was included idly, so I think it will come back later on.
By Edwin Davies
Labels: Doctor Who, television
Newer Post Older Post Home