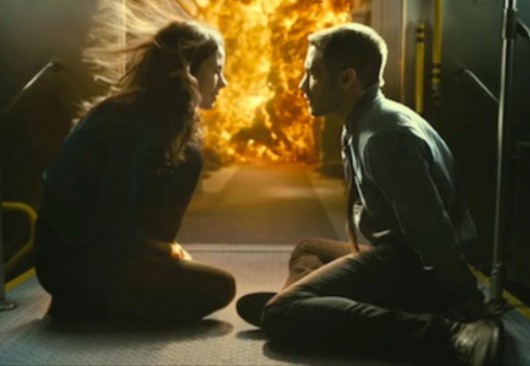 The way that his career is currently progressing, Duncan Jones could very well be the next Christopher Nolan. Bear with me one moment as I explain my reasoning. Both are intelligent, driven film-makers with distinct visions, and broke through with critically acclaimed, moderately successful films (Moon and Memento) which they parlayed into follow-ups which had bigger budgets and studio backing. However, whereas Nolan took the relatively straightforward and safe option of a thriller starring Al Pacino and Robin Williams - back when they were both still semi-respectable - Jones has decided to follow-up his low-budget, cerebral debut with a film every bit as clever, risky and ambitious, but which never loses sight of its role as a piece of entertainment.

Source Code opens with Colter Stevens (Jake Gyllenhaal) waking up on a commuter train bound for Chicago, having apparently dozed off halfway through a conversation with a fellow passenger (Michelle Monaghan) who seems to know him very well. Except Colter doesn't know her at all, and he doesn't seem to know himself. When he looks in the mirror he sees another man's face looking back at him, and his wallet and clothes belong to a man called Sean Fentress. As Colter frantically tries to figure out what is happening to him, a bomb explodes killing everyone on the train.

Colter then wakes up again, only this time he is inside a metal capsule, communicating via a video screen with a woman named Goodwin (Vera Farmiga) who explains that Colter is part of an experimental program called the Source Code. This program allows him to recreate and occupy the consciousness of Sean Fentress during the eight minutes before he died. This is not time travel - Colter can't alter the past, the people on the train are definitely and irrevocably dead - but Goodwin and her superior Dr. Rutledge (Jeffrey Wright) tell Colter that he can use these eight minute blocks of time to try to figure out just who planted the bomb and why, in the hope of preventing a future atrocity. Now, if you think all that is a bit much to take in, that's just the first ten minutes.

First off, yes, Source Code's plot is pretty ridiculous. The idea that someone can somehow enter the last eight minutes of another person's life and alter, however fleetingly, the events surrounding that death is something that leans very heavily on the "fiction" side of the science fiction equation. But it is a concept which is so flawlessly executed that its preposterousness is a distant second to how much fun the film is.

The strict time limit, not only for Colter but also for the people monitoring him, makes each sortie into the train fraught with peril. This sense of dread is heightened by the way in which the film takes a little time to flesh out the people on the train, who react in different (yet understandable) ways to Colter's actions, and which range from subtly unnerving to outright violence depending on how close he thinks he is to solving the mystery. It's in these interactions, particularly the increasingly flirtatious ones between Colter and Christina (Monaghan) that Jones and Ripley also find time to inject humour and humanity, preventing the film from becoming too staid or academic.

What really sets Source Code apart from other conceptual science fiction films that are out at the moment is that it manages to hide some depth beneath its glossy thriller trappings. Colter Stevens is a man trying to find out who planted a bomb on a train, but he's also someone trapped in a fractured timeline who is trying to figure out just who he is and what is happening to him. As he keeps having to take on the identity of Sean Fentress, he begins to wonder just who he actually is, a concern that is worsened when he discovers that Goodwin and Rutledge are not being entirely straight with him. As Colter, Gyllenhaal does a fine job of capturing the essence of man constantly having to readjust to new situations, desperately seeking answers both plot-driven and existential, and Monaghan, Farmiga and Wright give able support as the people who might be able to give him the answers he seeks.

Source Code is a potent cocktail of intelligent storytelling, effortless technique and genuine heart. That last part may be the deal-breaker for a lot of people, since the final twenty minutes or so strain so hard for a satisfying ending that the film winds up breaking its established rules for the sake of pathos, but up until then its a smart, engaging and entertaining film. And if you can accept the ending, it even has a real emotional kick to it as well.