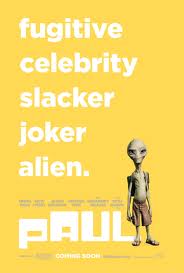 Clive (Nick Frost) and Graeme (Simon Pegg) are a couple of British science fiction nerds who, after making a holy pilgrimage to that mecca of fandom, San Diego Comic-Con, embark upon a transcontinental road trip to visit sites associated with extraterrestrial activity. After antagonising a pair of redneck types (David Koechner and Jesse "Landry" Plemens) in a bar, they drive off in a hurry, inadvertently witnessing a night-time car crash. As they survey the wreckage, cigarette smoke and a gruff voice float across the desert air. Out of the shadows steps a little green man named Paul (voiced by Seth Rogen). Paul is an alien who has been held by the government for more than sixty years, and he has escaped in order to finally go home. Faced with the opportunity to befriend a bona fide alien, Clive and Graeme decide to help him, unaware that Paul will prove to be the least of their problems.

The first film to not only star Pegg and Frost but also be co-written by them (their previous films together, Shaun of the Dead and Hot Fuzz, were written by Pegg and director Edgar Wright), Paul's humour manages to be both more accessible than their previous work whilst also being more focused on gags aimed squarely at the geek demographic. The tone and style of the film are far broader than their work with Wright, largely thanks to Greg Mottola's (Superbad, Adventureland) more conventional, less exuberant eye and a cast full of some of the biggest names in American comedy, particularly Kristen Wiig as a creationist whose faith is shaken when confronted by Paul, whose existence contradicts everything she believes in, and Jason Bateman as an FBI agent on their trail.

Make no mistake, though this is a film written by geeks, for geeks and about geeks. Along with a loving tribute to the weird and wonderful world of Comic-Con at the beginning of the film, there are references dotted throughout the film to frequent Pegg and Frost obsessions like Star Wars, Star Trek and the works of Steven Spielberg (specifically Close Encounters of the Third Kind which is the subject of several good-natured jokes and one crucial plot point) that will delight people with the same cultural reference points as Pegg and Frost. The film may contain more dick and fart jokes than their previous work, as well as references to non-science fiction works like, bizarrely enough, Andrew Jarecki's brilliant and disturbing documentary Capturing The Friedmans, but it still retains the passionate fanaticism that has made them cult favourites.

The big difference, for me, between Paul and their earlier work is that there is a greater reliance on the audience getting the references to get the gags. Whereas in Shaun Of The Dead you don't have to know that the line "We're coming to get you, Barbara" is from Night Of The Living Dead to enjoy the film, the line being just a little Easter egg for those in the know, in Paul I felt there was a definite chance that anyone unfamiliar with some of the works being referenced might be alienated by them.

In Shaun Of The Dead and Hot Fuzz, the intertextuality is all in the background because the characters themselves don't have an understanding of the genres being referenced; Shaun is not overly familiar with zombie films and Hot Fuzz makes a point of showing that Nicholas Angel is unaware of most action movies. Since Clive and Graeme are science fiction geeks - one being a writer and the other an illustrator - most of the references come from their mouths with a degree of authority, which in turn makes them significant and suggests that the audience should know to what they are referring. Let me put it this way; someone watching Paul might not be annoyed that they don't understand why the Five-Note firework (a nod to the piece of music played in Close Encounters that allows humans to communicate with the aliens) is appropriate for their situation, but they would not really understand why it is significant to the characters in that moment, which deprives the scene of meaning and the audience of enjoyment, if only briefly.

Having said all that, I saw it with someone who has never seen Close Encounters and they laughed as much as I did and said afterwards that they did not find the references obtrusive. (It might have helped that they knew that I was a handy geeky resource they could call upon for explanation. Perhaps they should display "See It With A Geek" signs prominently in all theatres screening the film.)

Enough theorising, let's cut to the chase; Paul is a fucking funny movie. I mean, it is very funny. Pegg and Frost's script is full of great comic set-pieces that are as elegantly constructed as they are hilarious. They will slowly introduce seemingly unrelated elements into a situation, let them settle for a moment, then combine them in surprising and clever ways. The plot of the film is often very predictable - If you make a point of saying that your alien character can theoretically bring people back to life, I defy anyone not to guess what will be required of him at the climax - but the jokes rarely are, thanks to their unwillingness to go for the easy gag or callback when they can do something more interesting and unexpected.

It also helps that they have such a great cast to help them realise their script. Pegg and Frost breeze through on the effortless chemistry that has been their trademark since Spaced, which often helps the film get through the weak, awkward first thirty minutes, whilst Kristen Wiig, Jason Bateman, Bill Hader and Joe Lo Truglio are all more than capable of capturing the wacky yet understated tone that the film relies on. Seth Rogen does some fine voice work as Paul, who is also realised with special effects which are believable without being awe-inspiring. There are also a group of terrific cameos in the film which I won't spoil, even though one of them is given away in the awful trailer currently doing the rounds.

It's not great art, but it is good fun. I laughed loud and often throughout and I wouldn't mind watching it again, which is the most important factor in determining whether a comedy is any good, aside from whether it is funny, and Paul is funny.