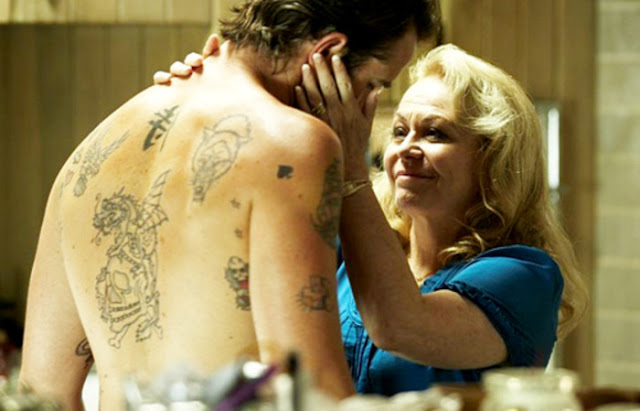 There is a crucial scene roughly two-thirds of the way through David Michôd's Animal Kingdom in which detective Leckie (ably played by Guy Pearce and his glorious moustache) talks to Josh (James Frecheville), a young man who finds himself at the centre of a family of bank robbers following the death of his heroin addict mother, about nature. Specifically, about how smaller creatures can either be preyed on by larger ones, or they can allign themselves with larger creatures in the hope of being protected. Leckie hopes that it will convince Josh to throw his lot in with the police so they can protect him from his family, but it's also a neat summation of a criminal world which is positively Darwinian.

Josh is taken in by his maternal grandmother (Jacki Weaver) and tries his hardest to stay out of the criminal dealings of his uncles. The film, through both Michôd's script and Frecheville's performance, does a great job of establishing early on that Josh is not merely a blank slate, an audience surrogate who will allow us to meet the more interesting master criminals, but a shrewdly passive protagonist who is smarter than pretty much anyone around him gives him credit for. But being smart is not enough to save Josh, since the actions of his unbalanced and violent uncle Pope (Ben Mendelsohn) following a tragedy drag him, along with his unsuspecting girlfriend (Mirrah Foulkes), into the family's conflict with the corrupt Melbourne police force.

What sets Animal Kingdom apart from a lot of other crime sagas, aside from a terrific sense of cultural specificity in its depiction of Melbourne's criminal subculture, is its tendency to string the audience along by following a familiar narrative, then unleash a sudden shock to the system by veering off in a wholly new direction. It's as disorientating as it is thrilling to see characters that are seemingly being built up as major players unceremoniously slaughtered since it gives the film a sense of unpredictability to the film that it maintains until quite literally the last minute of the film.

In that regard, the film's most obvious predecessor might not be cinematic, but televisual, since it shares the same love of anti-climax that made The Sopranos such a brilliant show; both allow scenes to build to a point where they seem destined to burst, only to fizzle out at the last moment; both share a fascination with organisations that put their faith in people who might only appear capable, but in reality allow themselves to make stupid mistakes that can only end badly; and both employ brutal violence sparringly as a way of punctuating the dread that engulfs the characters.

The cast are uniformly great. I have already spoken about how solid Frecheville is, but his greatest asset to the film is as a calm and meditative counterweight to the more exuberant performances of Mendelsohn and Weaver. The crime genre is littered with psychopaths and manipulative women, but few are as indelible as Pope and Janine Cody. Mendelsohn brings an eerie calm to the role that suggests why the family trust him and think that he can get them through the hard times ahead, but he can turn that calm into menace in an instant, and there are several scenes in the film which derive their power from the tension over which Pope will show up. One scene, in particular, is one of the most uncomfortable I've seen in a while, and features a death which is genuinely horrifying in its slow inevitability.

It is Weaver as Janine Cody who lingers longest in the mind, though. She is largely sidelined for the first two-thirds of the film, remaining an off-kilter presence who affects those around her, but does not directly effect the action. Then she flips the film on its head with a series of monologues which feature the sort of cold, implacable justification for murder and violence which are all the more chilling for how reasonable they sound. You can literally pinpoint the moment at which she earned her Oscar nomination, and for once that is not a sign of overacting but of a restrained performer filling everyone of her words with power and menace.

Animal Kingdom is a flawlessly realised depiction of a family tearing itself apart and of a bleak underworld in which no victory is easy, or even clearly described as a victory. It's exhilarating, tense, atmospheric and terrifying in a way that is closer to a horror film than a crime drama. A stunning debut from a young film-maker who hopefully has much more to offer.