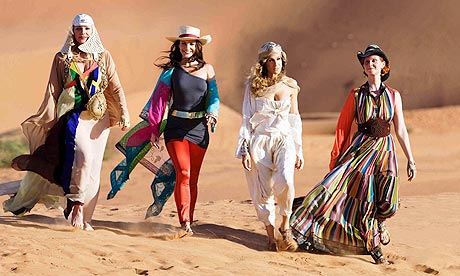 The one positive thing that can be said of Sex and the City 2 is that it is only two and a half hours long. Considering how punishingly dull, painfully unfunny and perversely shallow and inane the film is at its current length, it should be considered nothing short of a minor miracle that it isn't a single second longer. It tries to cram a season's worth of boring sub-plots, sub-standard sitcom banter and laboured puns into two dull, soulless hours, creating a film which is overly busy but in which astonishingly little seems to happen.
After opening at a gay wedding that is so outrageously flamboyant - containing, as it does, swans, an all-male choir singing cheery renditions of popular songs and a service conducted by Liza Minelli (in just one of several lines that inadvertently work a critiques of the film itself, a character wonders aloud, "Now, why would Liza agree to this?" I'm guessing "a wheelbarrow full of money") - that it is almost impossible to believe that it is anything other than an attempt by writer-director Michael Patrick King to belittle the hard-won victory that would allow two men to get married in the first place, we are quickly brought up to date with what has happened with the characters since the first film. And by "quickly," I mean "at roughly the pace of a snail on horse tranquilizers." And by "characters," I mean "vapid and hollow facsimiles that only resemble this quartet of beloved, iconic characters because they, by pure happenstance, are played by the same actors."

Carrie (Sarah Jessica Parker) is still married to Big (Chris Noth) but cracks have started to appear in her marriage. Or, at least, what Carrie thinks are cracks. Unable to process the fact that there is a considerable difference between being married and being single, and that sharing your home and life with someone means making compromises, she throws a hissy fit when Big buys a television so that they can watch old movies together - a genuinely romantic gesture - instead of buying her perfume - a boring, conventional gesture. Carrie storms out and spends the night at her old apartment, which she appears to own for reasons that have less to do with economics than they do with the staggeringly misguided idea, disseminated through the film, that what drew people to Sex and the City in the first place was the clothes, the shoes and the apartments, rather than the people that fill them.

As Carrie is feeling down about her ever-so-slightly imperfect marriage, Samantha (Kim Cattrall), still ready with a barbed one-liner and as sex-crazed as ever, gets offered the chance to go to Abu Dhabi on a business trip (which is neither explained nor defined) and decides to take the girls along with her. What then follows is an hour of cultural stereotypes veering from, on the one hand, men berating women for their promiscuity - setting the film up to make several attempts to bring attention to the plight of women in the Middle East that are so ineffective that they make the burka seem, if anything, too lenient - and an almost magical Indian servant who exists solely to teach Carrie lessons about what marriage really means. The Thief of Bagdad, a film that is 70 years old and in which almost every Arabic character is played by a white person in make-up, has a more enlightened and nuanced view of the Middle East.

What's most galling about Sex and the City 2, from the perspective of someone who liked and sometimes loved the TV series, is how little it understands what made the show special. It's as if Michael Patrick King took a long, hard look at the show, pinpointed what made it so unique and groundbreaking, then removed it all. It's akin to a doctor trying to make a diagnosis by removing all of the patients' organs, leaving only the skin and an empty husk.

The characters no longer even remotely resemble real women discussing their sex lives - the rating of the film alone precludes anything close to the raunchy, transgressive material that the show often dealt with so well - but shrill caricatures with superficial problems that absolutely no one except the most blithely oblivious members of the ultra-rich could possibly relate to. Each character has been boiled down to one or two defining characteristics, with nothing else. Samantha, for example, is no longer the powerful, forceful woman who enjoys sex that she was on the show, but a woman whose only motivation is to have sex, and one scene in which she stands in a bazaar, waving condoms around and screaming "Condoms! Yes, I have SEX!" is not only embarrassing because of how cringeworthy the scene is as but also because of how far it degrades the character. (The one possible exception to this trend would be Miranda (Cynthia Nixon) but only because she does and says so little that the film has few opportunities to demean her. It still manages to, but just not as much as the others.)

At one point in the film, Charlotte (Kristin Davis), who has spent the entire time worrying about how her husband leers over their Irish, bra-less nanny (who, it turns out, is a lesbian, which, as far as the film is concerned, completely excuses the lascivious looks that her husband gives her at all hours of the day) and who struggles with her children despite having a full time nanny, opines, "I don't know how women who don't have help do it." It's clearly intended as a moment of empowerment for the audience, but coming from a character who is so privileged and seems to lack even a modicum of self-awareness, it comes across as insulting, empty pandering.

In fact, the characters are so broadly drawn and have such a wholly wrong view of the world that the film verges on satirical. Certainly the above scene and one towards the very end in which the four characters meet a group of Middle Eastern women who, when they take off their burkas, are wearing the Louis Vitton Spring collection, are so crass that they seem like they could only be pieces of near-Swiftian satire. Yet the film does nothing to suggest that the characters are, in fact, wrong, and its message genuinely does seem to be, "Hey, we're all the same because, deep down, we're all shallow, materialistic shrews."

There is a scene in the middle of Sex and the City 2 which underlines everything that is wrong with it. At a karaoke bar, the girls stumble through a barely passable version of the feminist anthem I Am Woman, Hear Me Roar whilst homely women in the audience and overly-muscled men dance along. The corruption of a once revolutionary, empowering symbol, represented by that song within the film and Carrie Preston (nee Bradshaw) without, in pursuit of cheap entertainment is as indicting as any other charge that can be made against Sex and the City 2. Except the audience in the real world won't sing and dance along. They'll get angry. And they should.
By Edwin Davies
Labels: 2010, Cynthia Nixon, film review, Kim Catrall, Kristin Davis, Sarah Jessica Parker, Sex and the City 2
Newer Post Older Post Home