Why are you naked, too? Solidarity. 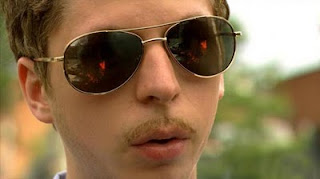 Michael Cera has spent much of the last decade forging a very distinct persona for himself, that of an awkward, often virginal, sad puppy dog character who fumbles his way through adversity to ultimately win the girl of his dreams. It seems to have become as much of a straitjacket as a meal ticket of late, though, as he has become typecast as solely that kind of character.

For much of Youth in Revolt, directed by Miguel Artela and based on the novel by C.D. Payne, Cera is expected to play his stock character, this time called Nick Twisp. Wow, after Nick and Nora's Infinite Playlist, it seems like even his character names are starting to bleed into each other. Nick meets Sheeni (Portia Doubleday) when his mother's deadbeat boyfriend (Zach Galifianakis) sells a faulty car to a sailor and they have to skip town. Nick falls in love, only to be dragged back to his awful home.

Realising he'll need to do something so awful that he'll get kicked out of the house so he can go and live near Sheeni, Nick creates an alternate personality named Francois Dillinger, an amalgamation of every French New Wave antihero and American outlaw, also played by Cera, who is able to do and say that things that he'll never be brave enough to.

Seeing Michael Cera break free from the restraints of his usual bag of tricks, especially after seeing him do the same charming mumbly thing in what feels like hundreds of films, is genuinely exciting, and easily the high point of an otherwise not particularly interesting film. Whilst Nick has all the usual Cera tics and is charming in the way that Cera often is, Francois is an unapologetic creep and it's weird and fascinating hearing someone as affable as Cera deliver sleazy lines like "I want to tickle your belly button... from the inside ." There's a steely, cold quality to the character that seems to physically change Cera in profoundly strange ways that are separate from the silly pencil moustache he sports for the part. It's fun because you can tell that Cera is enjoying being able to push himself for once, and the destruction that Francois causes - including blowing up half of the centre of town - is all the funnier for Cera's disaffected delivery.

Sadly, his performance is the only really interesting thing about the film, which never coalesces into a coherent whole, instead consisting of disparate tangents and styles. Even though the solid cast, which also includes Ray Liotta and Steve Buscemi, do their best, Miguel Artela struggles to give the film a real authorial voice, flitting between styles with no spine to give them meaning. Why have a travel montage that uses a cut-and-paste animation style? Why use models of Nick and his family when they are traveling by car? What purpose do they serve? They are only are empty affectations that distract from the film without adding to it.

The naturalistic style Artela opts for doesn't gel with the verbose and literate voiceover that runs throughout the film. A more artificial world would have suited the material better, or a less reverent approach to the material could have yielded something that better suited the style, and either choice would have made the dialogue feel less awkward and clumsy. The script by Gustin Nash also never manages to make sense of the darker aspects of the story. Aside from the destruction that punctuates the film, which is played for laughs but isn't all that funny, there is a bizarre subplot in which Nick tricks a girl at Sheeni's school into feeding her sleeping pills so that Sheeni will fall asleep in class and get kicked out. It takes the film into dark areas that it doesn't explore elsewhere, and it doesn't make any sense in the context of the rest of the film.

Hopefully Cera will continue to try to branch out and try different things, and hopefully he will do so in more diverting vehicles.
By Edwin Davies
Labels: film review
Newer Post Older Post Home