Never trust a bear who sounds like a Southern sheriff. 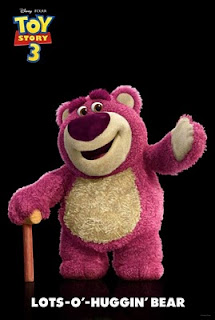 Toy Story 3 continues and concludes the story started in 1995 with the original Toy Story. The last time we saw Woody, Buzz and their friends, they were happy and united in the loving embrace of their owner, Andy. That was eleven years ago. Andy has grown up, but his toys, cruelly, have not. They have remained the same, and still yearn to be played with even though Andy has long outgrown them and, at the time that the film begins, is preparing to leave for college.

There's a familial warmth from seeing these characters again, particular if - like me - you've grown up with them and delight in seeing them setting out on one more adventure, but there's a sadness as well. There's a palpable sense of desperation with which Woody and his friends try to trick Andy into playing with them using the same sort of elaborate plans that they used in the past to see what new toys Andy would be getting for his birthday. It's a very autumnal film which spends much of its running time establishing the many ways in which the characters are coming to terms with their own obsolescence.

Some, like Mr. Potato Head and Jesse, accept it and choose to go to a daycare centre after a misunderstanding causes them to believe that Andy was going to throw them in the trash. Woody, on the other hand, keeps saying that Andy loves them and that they shouldn't abandon him, and escapes from the daycare centre - which all the other toys believe to be a paradise - just so that he can be with Andy again. Interestingly, even though Woody is right, and we know that he is right from a very early point, the film seems to make out that Woody is at least a little bit crazy. He comes off as a cross between a cult leader and someone who is in an abusive relationship, imploring everyone to trust in Andy unthinkingly because, deep down, he really loves them.

Of course, the daycare centre is a false utopia, presided over by a strawberry scented bear named Lotso (Ned Beatty) who imprisons Andy's toys when they try to rebel and return to their rightful owner, in doing so turning the film into a very funny homage to prison movies like The Great Escape and Cool Hand Luke. Lotso is supported in his reign of terror by a baby with a half-lidded eye (just one of many creepy little touches in the film) and a Ken doll (Michael Keaton) who lives the life of a confirmed bachelor in his dream home until Barbie enters his life. Like most Pixar villains, Lotso is actually quite sympathetic, and is even given a melancholy flashback in which we discover why he is the way he is.

That flashback mirrors the heartbreaking "Ellie's Song" from Toy Story 2, in that it's about a toy whose early experiences haunt them for the rest of their lives, except whilst Jessie became defeated and broken, Lotso became bitter and twisted. It's one of several conscious references to scenes in the earlier films which, rather than just being callbacks, comment on the ways in which the characters have changed over time. Toy Story 3 covers much of the same emotional ground that Toy Story 2 did, particularly with regards to how part of aging is accepting change and the end of friendships, but rather than simply retreading those themes it expands them.

Case in point, there are two moments in the film that I personally found very resonant, and which were powerful on their own, regardless of whether they revisited old ideas. The first came near the end of the film, when Andy has packed up his room and is getting ready to leave for college. His mother comes into the room, and nearly breaks down as she sees her son's room completely empty. It's a scene that perfectly captures the sadness of a child leaving home, and the sense of excitement and adventure that comes with it. The other moment comes right at the very end, and it rivals the opening fifteen minutes of Up as the most affecting work Pixar have ever done. It's a poignant, sad scene that encapsulates everything wonderful about the invention and creativity of being a child.

The third instalment also uses the visual style of the first two films, improving it slightly but without pushing the boundaries too far. Like the thematic recycling, this could seem like an unambitious retread, but instead creates a sense of continuity: It'd seem strange if the final film looked drastically better than the originals. That's not to say that the film doesn't try new things; the cinematography is lightyears ahead of what the studio were able to do back in 1999, and there are some simply stunning action setpieces in the film, ranging in scale from short escapes to a climactic fight for survival in a trash compactor.

As sad as the film can be - and it gets plenty sad, particularly in the last ten minutes - it's also very, very funny. There's a sequence in which, as part of an escape attempt from the daycare centre, Mr. Potato Head detaches his limbs and attaches them to a tortilla wrap so that he can move around outside. The sequence is wordless, and there is something effortlessly funny about seeing this tortilla creature wobbling unsteadily around. Another major source of amusement comes from Buzz being reset to his Spanish mode. It's a simple gag which Michael Arndt's (Little Miss Sunshine) script uses to its fullest without ever exhausting it.

Toy Story 3 is a melancholic film about aging, friendship and the boundless possibilities of the imagination masquerading as a family film about toys. It's deeply sad in places, thrilling in others, and hilarious when it needs to be, but it never feels forced; all its aspects are kept in perfect equilibrium. If this is the end of the series, and I can't help but think that any continuation would sully what is a graceful endpoint, then it is a fine one. As an individual film, it's not the strongest of the trilogy, but as a culmination of everything that has gone before, and a resolution to three films worth of storytelling, it's exceptional.