Dreams feel real while we're in them. It's only when we wake up that we realize something was actually strange. 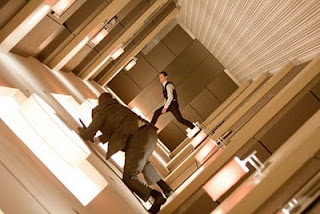 During one of the many firefights that litter Christopher Nolan's Inception, Eames, played by Tom Hardy, says to Arthur, played by Joseph Gordon-Levitt, that he "shouldn't be afraid to dream a little bigger, darling", before using a grenade launcher to dispatch an enemy combatant that Arthur had been unable to kill with a machine gun. It seems that Nolan, who directed the film from his own script, took this advice to heart, because with this film he has definitely dreamed bigger.

Inception is a film of ideas, in that it is both driven by them and is set within them. It takes place within dreams, and dreams within dreams, as we follow Cobb (Leonardo DiCaprio) the leader of a team of criminals who operate within the subconscious. Cobb's speciality is extraction - the theft of ideas by tricking targets into believing that the dream is real so that they will reveal their secrets. During one operation in which he and Arthur enter the mind of Saito (Ken Watanabe), Cobb and Arthur are undone by the presence of Cobb's ex-wife Mal. Upon waking, they discover that the operation was an audition, and that Saito wants Cobb to undertake a dream crime of his own; an inception - the implanting of an idea into a subject's mind.

Cobb begins to assemble his team. Along with Arthur, he enlists Eames, a 'forger' who is able to change his appearance in dreams in order to trick targets, Yusuf (Dileep Rao),a Chemist who will help them sedate the target long enough to allow the inception to take place, and Ariadne (Ellen Page), an architect who is in change of constructing the dreamscapes within which the team's deception will take place. Ariadne also acts as the audience surrogate to whom the rules of dreams are explained. Sometimes the rules make sense, sometimes they don't (or are explained so breathlessly that they seem not to - I'm still not 100% sure why sometimes it's fine for people to die in dreams, but in others it isn't) but it rarely matters. Nolan and his cast give us just enough of a sense of the peril of entering dreams to give their actions weight. We know that things can go wrong, and that if they do it could be disastrous for them.

As Cobb, Leonardo DiCaprio continues a recent trend in his career of playing essentially good men with profound psychological damage. Much like his character in Shutter Island, he is weighed down by a past and a family life that continues to haunt him, somewhat literally, as the spectre of his wife (played by the so-beautiful-she-makes-me-want-to-cry Marion Cotillard) keeps breaking out of his subconscious and manifesting herself in ones in which he is trying to commit crimes. The relationship between the two is hazy, which is only appropriate considering that it is shown only in flashbacks to half-remembered dreams, but it does develop a cumulative power as the film goes on, ultimately delivering a powerful kick when the depths of Cobb's sadness is revealed and we come to understand where his guilt and desire to go home stem from. Without this, the film could very well have ended up being merely an ice sculpture; exquisitely constructed, but cold.
It's also through DiCaprio's performance that one of the more important themes of the film - the nature of reality and how can people who work in dreams tell if they are in a dream or not - comes through. Cobb repeatedly finds himself questioning whether or not he is in a dream or not, and relies upon a spinning top to show him; if it falls, he is in the real world, if it doesn't he's dreaming. Without his nervous, frantic energy and the fact that he practically sweats paranoia, Nolan's film would lose a lot of its eerieness. We need to believe that Cobb is no longer in control of the world around him and his subconscious, and DiCaprio - as well as the superb supporting cast who play off of him - makes us believe.
At its heart, Inception is a marriage between the free-wheeling imagination of dreams and the precisely constructed world of puzzles. This would seem to be an impossible task, since dreams are by their very nature devoid of the kind of logical structure that a good puzzle needs. In dreams, a Rubik's Cube could become a Rubik's Tesseract, and you could solve it not by turning the sides, but by feeding it to a swan. The film reaches an elegant solution to this problem with its conceit of having dreamworlds that must be as realistic as possible in order to fool the targets into not realising that they are asleep. I had a problem with this conceit for much of the film since it seemed like a straitjacket that it was always straining against; it's set in dreams, so anything can happen, but the dreams have to be as real as possible, so it can't.

However, this conceit makes sense when you realise that it makes the moments when the film breaks loose all the more spectacular. An early scene in a cafe, during which Ariadne suddenly becomes aware that she is in a dream and which ends with the dream world exploding spectacularly around her, would be far less effective if such spectacle was the norm. It would also make the jaw-dropping scene in which Arthur battles goons in a corridor that is constantly spinning around (a scene which, in the best Irwin Allen tradition, was done using real revolving sets) would seem commonplace, rather than being possibly the most astounding piece of action cinema of the last ten years.

The real triumph of the film, though, is the ease with which it makes sense of its plot, which takes place not only within the architecture of the mind, but within the architecture of that architecture. As part of the inception, Cobb and his team not only have to build a dream world for the target to lose himself in, but dreams within that dream as well. The story then gets increasingly complex as different events occur on different levels of existence and thought, with each operating at a different speed to the others (for example, ten seconds at one level is equivalent to three minutes at another, an hour at the next, and ten years at another). Done badly, this would be an incomprehensible mess, but Nolan and his editors deliver the story in a way which makes sense and is viscerally exciting. We watch as three separate timelines converge for a simultaneous climax, as the characters battle time, physics and crumbling psychic architecture to complete their task and get out alive. It's a completely cinematic finale in that it could not be done in any other medium, so reliant is it on the ability of the edit to contract or expand time.

Characters existing at different levels of reality, unsure of what is real or not, reminded me of Philip K. Dick's novel Ubik, a book which also deals with reality, identity and multiple plains of existence and has famously resisted adaptation for being completely insane. Inception is a much simpler proposition than Ubik, even with its byzantine construction, because it is an action film first and philosophical treatise second, but it's no less impressive an achievement for it. It's the sort of film that you could only make if your last film was one of the most successful of all time. It's a bold, ambitious film that refuses to hold your hand as it takes you further down the rabbit hole, then makes you wonder if rabbit holes even exist. It's a dream that does not disappear on waking, but lingers and clouds your vision, making you wonder, "What if?" It's dazzling. Simply dazzling.
By Edwin Davies
Labels: film review
Newer Post Older Post Home