Doctor Who - Vincent and The Doctor 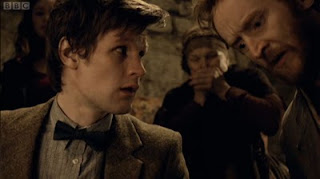 I've never been a fan of episodes in which The Doctor and his companion(s) meet real historical figures and solve a mystery/save the world together. It's not because historical inaccuracies bother me (anyone who complains about inconsistencies and continuity in a show about a magic blue box that travels through time and space is probably watching the wrong show) but because they tend to be the laziest written episodes. Why bother creating a new character full of nuance and subtlety when you can just choose a familar figure from history and give them a bunch of characteristics that everyone associates with them? Job done. To my mind, Mark Gatiss' Charles Dickens-centric episode "The Unquiet Dead" was the only episode to find the person in the icon, and, after watching "Vincent and The Doctor", it still is.

But before we get onto my problems with the episode, let's say what it is about. The Doctor is being incredibly nice to Amy in the wake of Rory's death (and erasure from time) and decides to take her to a museum so that she can look at some genuine paintings by Vincent van Gogh. Whilst they are looking around, The Doctor spots a mysterious, vicious shadow in one of van Gogh's paintings, and suspects that something very strange was going on when it was painted. After establishing roughly when the picture was painted by asking a tour guide (played by an uncredited Bill Nighy, who makes the most of a small, silly part) The Doctor and Amy travel back to 1888 to find out what the shadow is by asking the artist himself.

Enter: Vincent van Gogh (Tony Curran), who we are introduced to when he is trying to pay for drinks at a cafe by offering one of his "terrible" paintings to the owner. (One of the aspects of the episode that really grated on me was the constant references to how van Gogh was un-appreciated in his lifetime; it's fine to point it out once, but after a while the point feels laboured.) Initially unsure of these two strangers - though instantly attracted to Amy - Vincent is thrust together with them when they stumble across a vicious murder, and The Doctor discovers that Vincent is the only person in the village who can see the invisible creature that is terrorising its populace.

The episode is somewhat hobbled by the creature, since it's very hard to make someone fighting something invisible scary rather than ridiculous. The design of the creature - a sort of chicken-rhino hybrid - was impressive, if let down by ropey CGI, but most of the episode's scenes involving the creature consisted of characters fighting with thin air, which does look incredibly silly when it's meant to be suspenseful. They tried to get around this by having The Doctor use a special device that allowed him to see the creature (which, continuing the "Fairytale" theme of this series was essentially a magic mirror), which did make for some tense moments as Matt Smith frantically span around trying to locate it, but a lot of the action elsewhere fell flat.

Tony Curran was good as Van Gogh, but the character was too broadly drawn to be all that interesting and the show fell back on self-deprecation as an indicator of his mental state rather than actually trying to engage with the despair that would claim his life. There was one scene, in which The Doctor finds Vincent crying on his bed, that almost transcended the flimsily written caricature. Vincent talks candidly about being alone, and lets a single tear fall down his face as he says that he knows how it all will end. It's a subtle, underplayed moment that allows The Doctor, and us, to glimpse the pain that Van Gogh feels just being alive, and the knowledge that he would kill himself in a year's time makes his prediction eerie and discomfiting.

But then The Doctor goes to comfort Vincent, who starts screaming and throws him out of his room, strangling that little, sublime moment mere seconds after it came into being.

Which brings us to the ending, which, from what I've read, a lot of people seemed to like and which raised the episode from being merely average to a really good one. I couldn't stand it, and as such it turned an average episode into one of the weakest of this series.

So, after Vincent manages to slay the monster that has been tormenting the village and, because he is the only one who can see it, has contributed significantly to the deterioration of his mental health, we get a sweet little moment in which The Doctor, Amy and Vincent sit in a field, staring at the sky. I really liked this moment because we almost never get to see our heroes relaxing after winning the day; we might see them joking around or admiring their handiwork, but they're never relaxed. The sky changing from a normal night sky into an approximation of The Starry Night was also a nice touch. However, from this point on the episode devolved into unfettered schmaltzy bullshit.

The coda to the episode, in which The Doctor and Amy show Vincent inside The TARDIS, the take him forward in time to the museum from the opening of the episode, was particularly egregious in this regard. The MOR ballad, the shots of Vincent starring in wonderment at his art being appreciated long after he was dead, Bill Nighy delivering that terrible, overblown speech, it was all nauseating. Even Tony Curran seemed to be fighting the gag reflex after Nighy stopped talking. 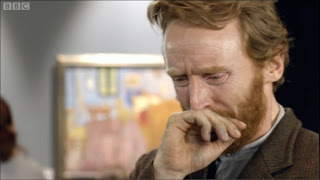 Go on, get it all out, son. You'll feel better for it.

I will admit to getting a little lump in my throat when The Doctor started talking about good things and bad things in life, but that was then ruined by the thunderously daft and heavy-handed sight of 'Sunflowers', one of Vincent van Gogh's most iconic and beautiful works, amended to now include a little "For Amy" on its front alongside the sublime "Vincent". That surely classifies as defacing a masterpiece by proxy.

I have no problem with schmaltz in general. I don't mind a film or TV show manipulating me in order to get an emotional response (for a recent example, I was very teary-eyed when watching the series finale of Lost, which was probably one of the most emotionally manipulative pieces of television I've ever seen) but what I can't stand is manipulation in service of an emotion that the show has not earned.

This episode completely failed to make me care about Vincent van Gogh as a person. This was not the fault of Tony Curran, who I think did a good job, but because the script by Richard Curtis did not make him suffer enough to warrant the catharsis we are meant to feel when he suddenly sees how much his work would be appreciated long after he died. By shying away from trying to portray his depression and madness, the show failed to make him seem like someone who deserved the chance to see how everything would turn out. (Though I was impressed by the moment when Amy, returning to the museum expecting to find hundreds of new van Gogh paintings, discovers that Vincent killed himself anyway, pointedly saying that his demons were not the sort that could be slain with an easel.)

It could be argued that Doctor Who is the wrong forum to examine depression, suicide and madness, but if that is the case then why make an episode that features Vincent van Gogh, one of the most famous and tragic figures in the history of art? Are we going to get an episode next year in which Kurt Cobain battles Cybermen with the shotgun he killed himself with, or in which Sylvia Plath saves The Doctor by gassing a Slitheen in her oven? Either try to tackle the issue that you raise in a real, meaningful way, or don't touch it. A half-hearted approach only does a disservice to people who suffer from depression.

Aside from the ending, my main issue was the lack of movement of the overall plot of the series. The sudden changing of gears from the emotional death of Rory last week to the fun, standalone goofiness of this week was jarring, and made me think that this episode could have been screened early in the series (probably as early as episode 3 or 4) without it changing very much. Breaking away from the main arc of the series after such a crucial event really frustrated me, since it destroys the rhythm that the show was establishing.

I feel slightly hypocritical for writing that, considering that I am a defender of the Lost episode "Across the Sea", which happened at a similar point in the last season of that show and which its detractors attacked for many of the same reasons that I've taken against this episode. My main defense would be that whilst "Across the Sea" deepened the mythology of Lost and advanced the characters of Jacob and The Man in Black, this episode of Doctor Who felt like an afterthought that neither advanced the main plot or did anything interesting with the characters. Considering the ground that could have been covered in the wake of Rory's death, and the guilt that The Doctor must be feeling, this episode can't help but feel like a missed opportunity.