Doctor Who - The Pandorica Opens 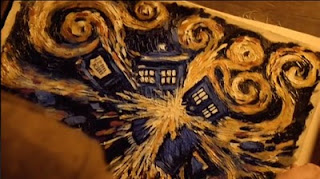 One of the great pleasures of watching this season of Doctor Who has been seeing how Steven Moffat has embraced (albeit tentatively) serialised storytelling. Certainly under Russell T. Davies the show toyed with serialisation by having arcs for the season, often revolving around phrases heard in the background (Bad Wolf, Torchwood, Saxon) which would turn out to have some deeper meaning in the final episode. This year, though, things have been different. There has been a definite thread running through the show - the "cracks" in space - and a sense of dread hanging over proceedings as we gradually learned that the cracks were in some way related to the destruction of the TARDIS.

The finale, of which "The Pandorica Opens" is the first part, had a lot to do, then. As well as telling its own story, which would end on a cliffhanger to keep us rapt until next week, it had to pay off eleven weeks of half-hidden clues, background whispers and occasional exposition in order to finally establish just what the cracks were and how they would destroy the universe. And it did it with aplomb.

Vincent Van Gogh paints a picture which sends him into a fit. The painting is discovered in 1941, given to Dr. Bracewell, who presents it to Churchill. Churchill phones River Song (intending to speak to The Doctor) who escapes and steals the painting. She's confronted by Liz 10, who agrees to help her when she sees the painting. Finally, River cons a shady alien out of time travel technology so that she can go back in time, carve a message into a cliff face for The Doctor to find, and meet him in Roman times to discuss the painting. Which shows the TARDIS exploding. Holy shit.

That opening five minutes, in which perfectly constructed scene follows perfectly constructed scene, not only drew together many of the threads that have been flowing throughout this current series by bringing back characters we've met before, but also gave the story a grandeur and the universe of the show a scope that a finale needs. Writer Steven Moffat uses these playful scenes to establish quickly and subtly that the threat facing The Doctor spans the entirety of existence. It's an economical approach to storytelling that tells us what is at stake without actually telling what is at stake.

From then, the episode leaps straight into the thick of things, taking us to (and beneath) Stonehenge, which is home to the mysterious Pandorica; a timeless prison which contains "a goblin, a trickster, a warrior", someone who poses a terrible threat to the world. And it's not just The Doctor who has found it. Daleks, Cybermen, Sontarans, Slitheen, it's a veritable WWE exhibition match in which everything that has ever hated The Doctor turns up to lay their hands on whatever, or whoever, is in the Pandorica.

All week, in discussions with friends and on the Internet, I've read different theories about who was inside the Pandorica. Was in The Master? Davros? Some lost Timelord we'd never met before? Or was it, as I came to believe, The Doctor himself? Some future version trapped and corrupted that would do battle with the good Doctor in a way which would then make good on River Song talking about killing the best man she ever knew back in Flesh and Bone.

In the end, that theory was half right, since whilst The Doctor wasn't in the Pandorica, he was put in at the end of the episode by his greatest enemies because they believe that he will destroy the universe unless they lock him away for all eternity. I fully admit to being suckered by Moffat's misdirection in this regard, and I was happy to be tricked. There a few things more satisfying in fiction than being surprised, not by a sudden, nonsensical twist, but by a perfectly logical one that you completely missed because you were looking the other way. It is, literally and figuratively, magic.

The Doctor being put into the Pandorica also contributed to one of the most sublime moments of the entire series, and easily the best cliffhanger of any finale I've seen. At the same time that The Doctor is being imprisoned, Amy suddenly gets her memories of Rory back (since he has been revived as an Auton who tries to battle his programming) moments before he then involuntarily shoots her, apparently dead. (Special mention to Arthur Darvill, whose return was very welcome and who did some particularly fine work when he was trying to assert his Rory-ness as he desperately fought the urge to kill.) And in the TARDIS, River Song found herself being thrown around by the forces of time themselves as the TARDIS exploded, apparently erasing all that ever was or will be.

The intercutting between Amy's death and The Doctor being strapped into the Pandorica by his greatest enemies was one of the most sublime moments of the series. As indeed was the final shot of Earth, surrounded by worlds and stars blinking out of existence, before the screen faded to black as all existence ceased.

The episode did hit at least one bum note for me: the crack appearing on the calendar display on the TARDIS was hugely effective, paying off the build-up we've had from the appearances of the "cracks" by having one appear in the one place we thought was immune to them, but which was somewhat undercut by a voice saying, "Silence will fall." For a writer who has shown a terrific willingness to trust his audience with his ideas, this was a rare misstep for Moffat, in which he felt the need to spell out just what the crack meant even though the mysterious nature of the cracks means that those words don't really have any meaning. They just underline a point that was already written in big, glowing neon letters.

Part of me is worried about next week's final episode - the universe was destroyed at the end of this episode, how do you come back from that? - but I've learned over the course of Matt Smith and Steven Moffat's inaugural series not to worry. They've delivered the most consistently enjoyable series to date, with nary a dull or misguided episode in the bunch (the few I didn't care for were still good, and were nowhere near as bad as the show can be) and I have every confidence that they can deliver a fitting end to it. They have earned my trust, I hope they do well by it.


Note: I'm going to be sitting in a field drinking this weekend, so won't be able to get a review of "The Big Bang" up until midweek sometime. I'll also be watching Toy Story 3, though, so you'll get slightly extra content when I post a, no doubt effusive and tear-soaked, review.

- Smith and Gillan on top form, banter-wise. The scene in which the arm of a Cyberman begins to shoot at them features some of their sparkiest dialogue.

- Cyberman's head trying to assimilate Amy is very reminiscent of The Thing.

- Amy faces off against a creature that is greatly superior to her in every way with a firebrand. She's a tough one.

- Rory! As a centurion! Great to see Arthur Darvill back. I've spoken often about the relationship between Amy and The Doctor, but the one between Rory and The Doctor has been equally fruitful this year. Their reunion scene, in which Rory tries to relate how exactly he disappeared and became a Roman was one of the warmest moments of the series, using laughs and heart to convey the surprise of seeing Rory again rather than cloying sentimentality.

- A bit of cock-waving when The Doctor essentially hype-mans the assembled masses of scum and villainy away for a brief period of time.

- Scene of Amy and Rory talking, with her breaking into tears and feeling incredibly happy but not understanding why, was effectively creepy and off-kilter.

- I enjoyed the interplay between Matt Smith and Alex Kingston again. Their old married couple act is still a lot of fun, for me at least.

- "I hate good wizards in stories. They always turn out to be him."
By Edwin Davies
Labels: film review
Newer Post Older Post Home