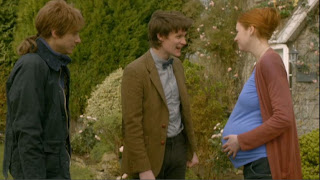 This episode finds us returning to Leadworth (well, Upper Leadworth), the scene of The Doctor, Amy and Rory's first adventure six episodes ago. It's five years later and the alien in the bow tie, tawdry quirks in toe, accidentally lands in the garden of Amy and Rory's picaresque little cottage. Things have changed though; Rory's a doctor with actual exams and a ponytail, and Amy is heavily pregnant. The Doctor reacts to these developments with equal parts amusement, derision and terror.

It's not long before The Doctor realises that things are a little off. There are no people around, for one thing, and then they start hearing birdsong, fall asleep, and wake up five years earlier in the TARDIS. After a bit more back-and-forth in which none of the characters quite grasp what is going on, the 'Dream Lord', a kind of deadly Crystal Maze host played by the always splendid Toby Jones, appears and explains the situation to them. They are leaping between two realities. One of them is real, the other is a dream. They will be confronted by a deadly threat in both (a dead star slowly freezing The TARDIS in 'modern' times, a horde of Eknodine, creatures which live in the bodies of the elderly of Leadworth and turn everyone else into dust in the 'future') and if they can't figure out which is real and which is not, they will die.

Characters involuntarily leaping backwards and forwards in time, or at least appearing to, reminds me of "The Constant", which is my favourite ever episode of Lost. (And maybe it's because I've been away from the TARDIS for a few weeks, and very much living on The Island as a result of the Lost finale, but did some of the music this week sound an awful lot like Michael Giacchino's beautiful score for Lost? There was certainly a similarity between the sudden, discordant crescendos that punctuated this episode and the ones that marked the ad breaks on Lost.) As such, I was pretty much on board with this episode from the moment that the trio fell asleep on a bench and woke up in the TARDIS.

Writer Simon Nye constructed a really compelling mystery that allowed the dual threads of the narrative to run alongside each other without letting on which was the real one. Of course, within the confines of the show, the Leadworth realm had to be fake, since having Amy give birth, adding a baby to the dynamic, would have creating enormous problems from a writing point of view, but Nye managed to make both seem equally plausible right up until the last moment. Even then, he had an extra surprise up his sleeve; neither was real at all, and the Dream Lord was a manifestation of The Doctor's darkest moments. It was a reveal that could have backfired horribly and rang terribly false, but the combination of a tense, emotional build up totally justified it.

Toby Jones is one of the best guest stars that the regenerated series has seen so far. He had just the right mixture of theatricality and steely menace; he's a mime with a razor blade. You can laugh at his witticisms and the sheer glee of his performance, whether he's taunting The Doctor by reciting nursery rhymes or changing his clothes to look like an hilarious approximation of a gigolo, but you can't relax because you understand completely what a threat he is. It's half Jones' performance that makes him a believable enemy, but it's also down to Matt Smith's barely contained frustration. Anyone who riles The Doctor up this much, and who seems to be on top of the situation, has got to be bad news.

A great episode for Karen Gillan, particularly in the Leadworth half of the episode since she was essentially playing a different version of the Amy that we know and love. She's older, pregnant, and, though she doesn't say it until too late, deeply in love with Rory. Two moments stand out for me; the gently horrified reaction she gives to when Rory cuts off his ponytail, which speaks volumes about their married life and the relationship that has formed in the years they have been apart from The Doctor; and the heartrendingly brutal way that she delivers the line "Then what is the point of you?" when Rory is "killed" by one of the creatures. She puts so much anger and spite into that one line that you know instantly the pain and anger she feels, however wrongly, towards The Doctor for failing to save Rory. Once again, The Doctor's fallibility forms a central moment in the episode, as it has throughout this series.

Rory's death midway through the episode, even if it wasn't in the strictest sense real, was a really beautifully handled scene. His slow deterioration as he turns to sand, coupled with his plaintive entreaty to Amy to raise their child, was played with the right amount of melancholy and understatement to make it really powerful, even if I didn't really think it was a true death. Not to harp on about Russell T. Davies yet again - he's long gone and I feel like I'm beating a dead horse by going on about his tenure on the show - but I can imagine that same scene being played with bombastic, melodramatic strings in the background and floods of tears, and it would not have had half the impact that it did. Nor would the aftermath, in which Amy intentionally crashes a minivan into the side of a building because she a) is convinced Leadworth is a dream and b) if it isn't a dream then she doesn't want to live in a world without Rory, was a really noble sacrifice, one which was not diminished by the ultimate revelation that none of it was real because the emotions being portrayed absolutely were.

Apart from the big, emotional stuff, there were some little character moments that I really enjoyed. After Amy fakes the onset of labour to scare The Doctor into admitting that her life isn't as dull as he is making it out to be, Rory gives him a little look of half-hearted defiance. In that instance, he's both revelling in a vicarious victory over the man who has so overshadowed his life and his relationship with Amy, but also realises that he had absolutely nothing to do with that victory so any feelings of supremacy he might have are, at best, ill-founded. As this series has done repeatedly, it uses little microcosms to reinforce the central dynamics of the show: The Doctor might be the know it all, but Amy is more than a match for him, and even though he's got the girl, Rory will always have to compete to be the most important man in her life.

A terrific episode, and one that reminded me of everything I love about Doctor Who. It's good to be back.

- Lots of really funny lines in this episode, my favourite being Amy saying, "If we're gonna die, we'll die looking like a Peruvian folk band" after dressing everyone up in ponchos. (She's clearly the Vince Noir of the group, with Rory, who considers them to be "The biggest crime against fashion since Lederhosen" being the Howard Moon.)
- Loved The Doctor saying, "There's something that doesn't make sense. Let's poke it with a stick." Funny line, and one which so completely sums up The Doctor and his approach to problems.
By Edwin Davies
Labels: film review
Newer Post Older Post Home