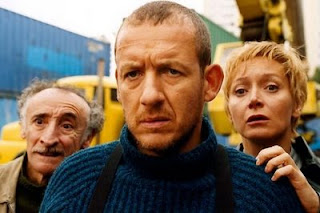 Micmacs (or, to give it its full title, Micmacs à tire-larigot) is the first film by French director Jean-Pierre Jeunet since 2004. This gap between projects, rather than being due to a lack of ideas or work, is the result of his abortive attempt to bring Yann Martel's Life of Pi to the screen, a project which Jeunet invested a considerable amount of time and effort in before disagreements over budget forced him to step aside. Clearly, during those frustrating meetings, Jeunet was busy jotting down his own silly ideas because the film he ended up making is bursting with invention and a giddy abandon that suggests a director just happy to finally be making a film.

As the movie opens, we see Basil (Dany Boon), a video store employee working into the small hours, whiling away his time watching The Big Sleep. He knows every word, and mouths along to Bogart and Bacall as they trade barbs. Suddenly, his peace is disturbed by a gunfight outside. As he tries to see what is going on, a rogue bullet hits Basil in the head. Though it doesn't kill him, the bullet is left in his brain since removing it could leave him in a vegetative state. To make matters worse, his period of convalescence causes Basil to lose his job and his apartment. However, Basil soon learns the name of the company that made the bullet, as well as another which built the landmine that killed his father years before, and begins to enact a ridiculously circuitous revenge against both companies with the help of the assorted outcasts that become his surrogate family.

Micmacs is an odd film, not merely because of its convoluted plot and delightfully fanciful notion of a Paris in which two rival weapons manufacturers would have their headquarters on opposite sides of the same street, but because it lacks certain essential elements of a funny heist film, tension and interesting characters, yet somehow still works. There's no suspense to any of the film's comic setpieces, no sense that a heist needs to go exactly right otherwise it could all fall apart, because each one succeeds flawlessly, almost effortlessly. It almost seems too easy for the characters, making the villains, played by André Dussollier and Nicolas Marié, seem little more than paper tigers; they have all this power and wealth, but they are easily duped by a group of misfits. If there isn't a sense of peril, why should we worry about whether or not our heroes succeed?

However, there is a real joy to watching those set-pieces unfold, in seeing Jeunet connect robbing a drug dealer, dressing a character up as an African merchant and hiding a woman in a suitcase into a single, seamless sting. And there is something wonderful about seeing how these smaller heists fit in to Jeunet's larger caper. It's the equivalent of watching someone construct a Rube Goldberg device out of half a dozen smaller Rube Goldberg devices.

As for the characters, whilst they may be odd, they're not especially interesting. Basil is the most fully formed character, largely thanks to Dany Boon's astounding physical dexterity, allowing him to convincingly carry out slapstick routines without losing the soul of the character, but the rest of the main cast are defined solely by what they bring to the party: The contortionist, the inventor, the dare-devil, these are all archetypes, rather than actual characters, and the core group often feels more like a team in a role-playing game than characters working towards a common goal.

Fortunately, the performers are so endearing and are clearly having such a good time that they overcome the film's weaknesses. When Dominique Pinon gurns exuberantly, or screams madly whilst stuck to the front of a truck, or the entire cast bursts into laughter when Basil discovers Rubber Girl (Julie Ferrier) coiled up in a refridgerator, what does it matter if the conversation that brought the characters together in the first place is essentially, "You're homeless. Come and live with this group of strangers who will adopt you!"?

As with all of Jeunet's films, Micmacs is a visual feast. There's a strong silent film influence, with many scenes playing out without any real dialogue, letting the actions of the cast and the rich colour palette sell the jokes much better than words could. It overflows with little details and ideas that really mark the film out as something strange and unique. For example, whenever the bullet causes Basil any trouble, he starts to do mental exercises to distract himself, such as remembering how famous figures from history died. Rather than just having Boon say this, though, Jeunet has them depicted using hilarious woodcut animations. These in no way advance the plot or give us an insight into Basil's character, they're just charming little asides with no aim other than to make the audience giggle.

In a way, the entire film is a charming little aside. Light on plot and - despite its attempts at being a satire of the arms trade - meaning, Micmacs is best appreciated as a trifle, rather than a main course. Not as filling as Delicatessen or Amelie, but a perfect way to indulge your sweet tooth.
By Edwin Davies
Labels: arms trade, comedy, film review, French Cinema, Micmacs, slapstick
Newer Post Older Post Home