I will always love you. That is the only truth that remains. Life is neither right nor wrong, good or bad. But I love you. That's all I know. 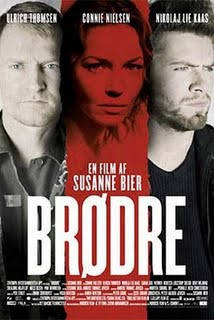 Michael (Ulrich Thomsen) is a Danish soldier who is being shipped out to Afghanistan, leaving behind his wife, Sarah, (Connie Nelison, of Rushmore fame) and younger brother, Jannik (Nikolaj Lie Kaas), who has just been released from prison and who has no direction in life. Shortly after arriving in Afghanistan, Michael's helicopter is shot down and he is listed as killed in action, forcing Jannik to take some responsibility and help her through this difficult time.

My second Susanne Bier film (after the wonderful Open Hearts) and again it was terrific. Much like Open Hearts, Bier takes a story that could be sensationalist and that, at times, veers on the soap operatic and makes it believable and painfully real.

The film could very easily run the risk of becoming overly melodramatic and saccharine but Bier completely avoids any such trite sentimentalism. Using a rough, handheld style she creates an intimate, almost claustrophobic atmosphere and forces the audience to observe the smallest movements of her characters, placing us almost uncomfortably close to them in their time of loss. She is an expert in capturing small but telling reactions. Take, for example, the moment when Sarah breaks down in her car whilst driving Jannik back from a bar. Whilst Connie Nielson hides her face in the steering wheel, denying us and Jannik from seeing her face, we see that Jannik sits back, completely unsure how to react and at a loss as to how to comfort this woman that he barely knows. It's a moment which, for me, having experienced a very similar moment in recent years, felt palpably and poignantly real.

Both Connie Nielson and Nikolaj Lie Kass are wonderful during this part of the film. Kass is very convincing as something of a screw up, being both pathetic and sympathetic (which is some achievement, since it is hinted very strongly that he went to prison for sexual assault, not a positive trait) and his growth over the course of the film into a more mature character is heartwarming, in the best possible way. Again, it’s the little moments that sell the big emotions. The look of concern on Jannik’s face when he stops his drunk father from driving home from the funeral, the look of pain on his face when his father tells him that he considered Michael to be his only son, all add up to a compelling character.

As Sarah, Connie Nielson carries the emotional weight of much of the film. She is the one who has to be stoic, who has to care for her two children and a grieving extended family to deal with. The build up to her breakdown in the car is subtly handled but absolutely devastating when it comes since, up to that point, she has seemed so strong, and once we see her leaning on Jannik for support more and more, we get a real sense of a friendship growing between the two out of the worst possible situation.

Even though the first half of the film is outstanding and makes for an absorbing slow-burning drama, it is during the second half of the film that it really elevates itself. Unbeknownst to Jannik and Sarah, though knownst to us, Michael is alive in Afghanistan and is being held a prisoner by rebels. Michael has a fair deal of technical knowledge when it comes to weaponry so he is kept alive, at a terrible cost.

When Michael returns home, he is a changed man. When we saw him at the start of the film, he was a warm man, a loving husband, father and brother who held his family together. The memory of his time as a captive weighs heavily on him now, and he closes himself off from those who love him, afraid that if they found out what he did in order to survive they would turn their backs on him. Worse of all, in his absence Jannik has stepped up and taken some responsibility, becoming a surrogate father to Michael's children. This drastic and fundamental change in the familial situation makes Michael into an outsider in his own family, and his guilt only further isolates him further, making him hard, brittle and paranoid as he comes to suspect that Jannik and Sarah engaged in an affair when they thought that he was dead. Ulrich Thomsen is great in this part of the film as he manages to convey just how conflicted Michael is but somehow remaining sympathetic even when he starts getting violent.

It's a Serious Film about Serious Things but it brims with life and vitality. Susanne Bier is able to imbue her films with energy and passion, even when dealing with the most dour of subjects. She is an important film-maker, capable of great things and her films should be appreciated for the little treasures that they are.
By Edwin Davies
Labels: film review
Newer Post Older Post Home