I will civilize this land 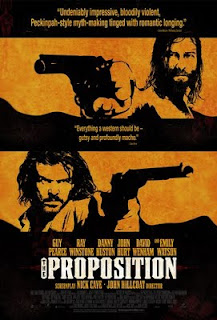 The film opens with a montage of yellowed, aged pictures of Australian settlers and Aborigines at the turn of the century, illustrating the harsh, dusty existence these people faced. This seamlessly transitions into pictures of members of the cast in their roles in the film (this was so well done that it was only when I thought ''that guy looks like Ray Wins- oh'' that I realised the change), then erupts into a furious gunfight. This brief sequence encapsulates a lot of the themes and techniques of the film; the idealised view of Australia's past contrasted with the grim realities of how it was forged, and moments of quiet reflection suddenly erupting in spurts of violence.

The plot of the film can be very quickly summed up thusly; three brothers who are members of a gang, two are captured and one of them (Guy Pearce) is given the chance to save the youngest brother by killing the elder, and far more vicious, sibling (Danny Huston). This would seem to be a straightforward, Robin Hood style tale of a corrupt lawman forcing the plucky outlaws to do something, but it is not that simple. This is not a film that is painted in broad strokes of black and white, but thousands of shades of grey. The only characters that could be seen as 'heroes' in the film would Guy Pearce's Charlie Burns, the brother given the task of offing his brother, and Ray Winstone's policeman, Morris Stanley. More on them later.

The performances in this film are all exemplary; Guy Pearce does sterling work as the brother committed to carrying out a grim task in the hope that his brother could have a better life, Danny Huston manages a mixture of malevolence and charm as Arthur Burns that is quite brilliant and adds to the overall sense of moral ambiguity that pervades the film. John Hurt also puts in a magnificent performance as an aging, racist bounty hunter who is also after Arthur. Ray Winstone is the star of the film, though. His portrayal of Stanley, the sheriff who is put in charge of 'civilising' the outback by bringing in the Burns brothers is a melancholic masterpiece of acting. Stanley may have condemned one of the three brothers to death, but he is by no means an evil man; he a man doing his job as best as he can; he is a loving husband; and he is a firm believer in justice, not vengeance, as shown by one pivotal scene in which he threatens to shoot anyone who tries to whip the youngest of the brothers, Mikey, even though his superiors have demanded that it be done . Emily Watson also provides a superb performance as Winstone's supportive wife.

The moral ambiguity of the film is easily one of its greatest strengths. You will constantly reappraise you're own opinions of characters as the film gradually rebeals more and more about their true nature; the 'good guys' do worse things than the bad guys, David Wenham is a case in point with regards to this idea. His character, a refined English superior to Winstone's character, starts off as the seemingly intellectual and moral superior to Stanley, but as the film progresses he is seen to be as ruthless, bloodthirsty and morally bankrupt as any other character in the film.

The cinematography of the film is nothing short of stunning; harsh, unforgiving outback is both backdrop and an extra character in the mix of the film. The visuals really enhance the sense that Winstone's character is facing near impossible odds in attempting to carry out his duty and help in the justification of his actions with regards to the Burns brothers. The film looks gorgeous as a result and gives a tremendous sense of scale and futility to the lives of the characters. This is hardly something that is new to the genre of Westerns (and I use the term in the loosest possible sense) but it is carried off stupendously here.

This film is an 18 for a good reason; the violence. This is not the stylised violence of Tarantino, but bears more of a resemblance to the full-on assault on the sense that can be found in Mel Gibsons' Passion of the Christ (except without the Jesus gubbins). It is gritty, morbid and often shockingly graphic, making the Australia depicted on screen seem ever the more realistic.

Much of the credit for the quality of this film must lie with Nick Cave for penning a truly awe-inspiring script. The film covers a lot of the recurrent themes in his music; violence, religion, redemption; and he has created an outback populated with fully realised characters that are incredibly flawed and, in many cases, downright horrible creatures. The portrayal of Aborigines in the film may be a bit one dimensional, but they are quite consistent with contemporary opinions about them and the way in which they related to the white settlers, so the racism the characters display goes a long way in establishing the realism of the film.

I couldn't review a Nick Cave film without commenting on the soundtrack now, could I? Written by Cave with Warren Ellis, it is a sumptous mix of traditional-sounding songs and modern musical stylings, most notably a few moments of electronic music that do jar somewhat with the old world visuals of the film, even if they do add to the mood of the film, they can be a bit distracting.

Don't see this film if you are expecting a good ole' fashioned Western full of action, blood and guts (though there is plenty of those) because you'll see a gorgeous piece of cinema that works as both a character piece, and as an interesting examination of the creation of a country.
By Edwin Davies
Labels: film review
Newer Post Older Post Home