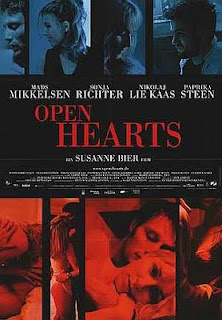 The Danish film Open Hearts, directed by Susanne Bier, is one such example, as the action of the film is kicked off by a sudden and horrific accident in which Joachim (Nikolaj Lie Kaas) is run over by Marie (Paprika Steen) right in front of his fiancee, Cecily (Sonja Richter). Wracked with guilt, Marie encourages her husband, Niels (Mads Mikkelsen), a doctor at the hospital where Joachim is being treated, to talk to and comfort Cecily. It is not long before Niels develops feelings of love for Cecily, and the relationships of everyone involved are thrown into turmoil.

I may be making a grave error in naming Bier as the director, since it is a Dogme film and acknowledging her role as a director is in contravention of the very nature of the Dogme 95 movement. However, as fun as it might be to indulge that slightly juvenile conceit, films do not magically appear. Someone has to direct them, Susanne Bier directed Open Hearts, and Lars von Trier and Thomas Vinterberg will just have to live with that.

I've often been... 'dismissive' is too strong a word, but I've certainly been unresponsive to Dogme films in the past. I absolutely adore the concept and think that it can create great work, but often it produces films that are cold and self-conscious. Open Hearts is the first example I've found of a Dogme film that genuinely hit me on an emotional level. This may be because it breaks some of the fundamental Dogme rules (non-diagetic music is used, 'theatre blood' is used and the beginning and end are created using a thermal imaging camera), thereby breaking free from the same restrictions that have distanced me from past efforts, but I think what is more important is that it is does not draw attention to its aesthetic in the way that most Dogme films do. Too often with Dogme films, the stories are subservient to the method, producing films like Lars von Trier's 'The Idiots' that are the exact opposite of what the movement seeks to create; they try so hard to be 'real' that they feel self-conscious and fake.

Bier never lets her chosen aesthetic get in the way of her story, and that is why the aesthetic actually makes the film feel real, rather than just an idle experiment. Bier utilises the raw feel of Dogme film-making to immerse us in the lives of the characters. There is an almost documentary feel to the film, as if we are watching a real group of people struggling through a time of intense personal trauma, and this immerses us wholly in the story and making the melodramatic aspects of the central narrative, which is soap opera-esque when written down, seem utterly plausible.

Much of this plausibility is down to the actors, all of whom do amazing and subtle work, conveying the anguish of their characters in ways that are in keeping with the rest of the film. Every character has light and shade to them, some such as Joachim, who goes from charming and impish in the first scene to bitter and angry after his accident, are more obviously shaded but then again he is the character who goes through the greatest change over the course of the film, both physically and emotionally. Mads Mikkelson and Sonja Richter, as Niels and Cecily, have to carry the film and both of them give career-best performances. Richter makes Cecily completely endearing, even when her cloying desperation with Joachim could be insufferable. You find yourself wanting her to get everything together and realise who she should be with.

It is Mikkelson, though, who shines through as Niels. He plays him as a man who is almost reluctantly falling in love, a man who loves his wife and children, but who has met someone who may be his soul mate under the most tragic and unfortunate circumstances. It’s heartbreaking to see him torn between all the people he loves, yet you completely emphasise with him because he’s so vulnerable.

Apparently, Zach Braff has been shepherding a remake, which he will write and direct, towards some stage of production for several years. It is imperative that as many people as possible see Open Hearts before that base and contemptible event happens. To miss out on this film is to miss out on something sublime, don't wait until J.D. gets his hands on it.
By Edwin Davies
Labels: film review
Newer Post Older Post Home