Continuing to catch up on reviews that I've been meaning to do fro ages, here's a belated review of The Hangover. 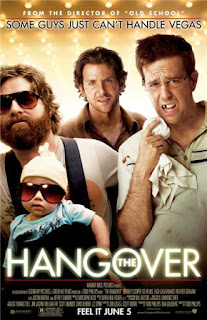 Doug (Justin Bartha) is getting married, and he's spending his bachelor party in Las Vegas with his friends Phil (Bradley Cooper) and Stu (Ed Helms) as well as, somewhat reluctantly, his brother-in-law to be, Alan (Zach Galifianakis). Things start off well, but when Phil, Stu and Alan wake up the next morning they have no memory of what happened the previous night, Stu's lost a tooth, there's a tiger in the bathroom and Doug is missing. They've got a day to find him, difficult enough, and that's without factoring in Mike Tyson or a naked Asian man.

Outside of that brief synopsis, there is no 'plot' to The Hangover. The amnesiac aspect of it allows for director Todd Phillips and the writers, Jon Lucas and Scott Moore, to layer on more and more absurdities as the cast try to figure out what they did last night. If you try to piece together the story, as the characters do, there is no real consistency since they have clearly done more in one night than is possible. This doesn't matter, though, since the absurdity of the plot (or whatever you want to call it. 'Premise' might be the best word) is its one real strength, making the situation ever more ludicrous and enjoyable.

The film follows in that recent tradition (an oxymoronic but apt notion) of modern American comedies in which the script has a deliberately loose feel to it, making it seem as if the actors have to find their way through the scene to uncover the joke. This can seem amateurish (as attested to by every Will Ferrell/Adam McKay film that isn't about Ron Burgundy) but here it works to the advantage of the film. Since the characters are so thoroughly, thoroughly hungover, their sluggishness and awkward line deliveries feel right for the film, rather than just a case of poor scripting or lax direction.

It's the performances, more than anything else, that make the film. The three leads are all hilarious in different ways. Bradley Cooper emits a sleazy charm that he never loses, even when people are shooting at him for seemingly no reason. His attempts to maintain his cool and try to find Doug are hilarious because we can see that he is so clearly over his head but thinks that he can get through it through sheer force of will. Ed Helms is very funny as the hen-pecked, weak Stu, a man whose life is so firmly settled into a nice rut that he ignores all evidence of his girlfriend's infidelities and general lack of redeeming qualities purely to avoid an argument. He is the one who suffers the most in Vegas, not only by losing a tooth but also through his marriage to a prostitute (Heather Graham), but he's also the one who progresses the most as a character, in that he progresses at all, and he gets a moment at the end that is weirdly uplifting.

The star of the film, though, is Zach Galifianikis as Alan, the cause of all the trouble in the first place. Alan is a not a character so much as he is a collection of traits and funny lines. He often makes outrageous claims about his life that seem to have little basis in reality, but this is all the more appealing since you need a character as fragmentary as Alan as a primer for the zaniness of the plot. Galifianikis plays Alan as a childish id, unable to control himself and constantly causing trouble and he's surprisingly charming, despite being rather repugnant in a lot of ways. Cooper seems like the one who will become the bigger star since he's the best looking of the bunch, but Galifianakis is the one who will hopefully go onto do better and similarly edgy work.

It's not a film so much as it is a collection of moments, but those moment, when they hit, are terrific.
By Edwin Davies
Labels: film review
Newer Post Older Post Home