I may have come into this world as Michael Peterson, but I'll go out with my fighting name... 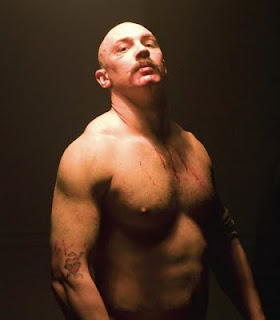 The key emotion I felt after watching Nicholas Windig Refn's ''Bronson'' for the first time was not joy. It was not sadness, it was not fear, it was not even the warm, fuzzy glow you get after you realise that you have seen something great. No, the key emotion I felt was relief, relief that I would not have to spend another minute in company of Michael 'Charles Bronson' Peterson, the self-styled ''Most Dangerous Prisoner In Britain''.

I don't want anyone to think that this means I didn't like the film, I was very taken with it, but all I could think once the credits rolled was that I had to get out of the cinema. I had to escape from this man who had spent the last 92 minutes scaring the hell out of me.

That man is Charles Bronson, a man who has made his name through acts of violence and terror for over twenty years, but more specifically, the man who plays him is Tom Hardy.

Now, I had seen Tom Hardy in something before seeing him in Bronson, and anyone who has seen it will tell you that there is no indication of the sheer sturm und drang of his career-making turn. That previous performance was as Praetor Shinzon in Star Trek: Nemesis, aka, the film that left Star Trek on a cold slab until Jaybrams came to give it CPR. To be fair to Hardy, the problems with that film don't lie with him, but his rather weedy turn as the villain gave no indication that he had the potential to be one of the most incendiary actors of his generation. As Bronson, he is hugely impressive but also oppressive; you feel uncomfortable being in the same room as him, even when he's not doing anything. His presence in the film is suffocating, with every action imbued with a potential for violence that could erupt at any second.

Bronson is, in a way, a one-man show. There are other actors in the film, most of whom, at some point or another, get punched or threatened by Bronson himself, but they are merely there to give him something to play off. For Charles Bronson, and the man who plays him, is not so much a character as a force of nature, an inscrutable, unstoppable whirlwind of fists, feet and fear, always fear.

Director Refn and his co-writer, Block Norman Block, create an impressionistic view of a man who, at best could be called eccentric, at worst could be called batshit insane. Utilising music, meta-narratives and a constantly moving camera, they deliver an auteurist vision of violence, the effect it has on those who use it and the bizarre ways in which it came be said to redeem a person, all the while refraining from glamourising or condoning the actions of its protagonist. Though it doesn't exactly condemn him for them, either.

Much of the film moves through several time periods but also several spheres of existence. Much of the film follows the narrative of Michael Peterson's life from his initial arrest for an armed robbery, through his incarceration, his release, adoption of his ''fighting name'', re-imprisonment and numerous struggles with the authorities. These sequences offer little in the means of character development, consisting as they do of scene after scene of Peterson beating people senseless in a variety of locations and for the most light of reasons, with the exception of a few scenes in which he is content just to terrorise people. One involving a police officer that he takes hostage and who he then forces to help grease him up so he will be able to fight other policemen, which makes him seem sort of like The Transporter with a cockduster moustache.

The other sphere within which the film operates, the one which is more intellectually stimulating, take place on a stage, and consist of Hardy performing on his own to a sparsely-lit audience, delivering up insights into what might be driving Bronson, what his desires are, what he makes of the mishaps that befall him; and which, it may be said, he brings upon himself. These sequences highlight what a truly phenomenal performer Hardy is, just look at the scene in which he plays both halves of a conversation between Bronson and a psychiatric nurse, but also the underlying thesis of the film; that maybe Bronson is not a violent man by nature, but that he became so in order to become famous. It also ponders whether or not the person performing these acts is Michael Peterson or Charles Bronson, suggesting that at some point the persona became so huge that Peterson was given no choice but to live up to it. It's a truly fascinating look at the way in which people create personae for themselves and how putting on a mask can shape a person's destiny.

The film ultimately leaves this question unresolved and it is all the stronger for it. On the surface, Bronson may seem to be merely a staccato beat procession of violence designed to sate an audience baying for blood, but underneath it is a film about violence and the notion of personae that is deeply exhilarating.