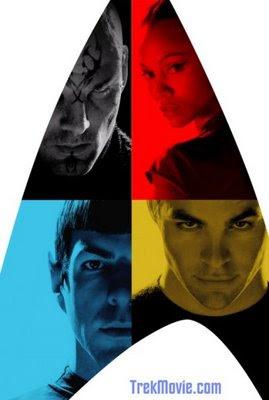 The film opens with a stunning action set piece in which a Federation ship encounters that of Nero (Eric Bana), a Romulan who seems to have access to technology far in advance of anything the Starfleet vessel has. The two quickly engage in combat, and George Kirk (Chris Hemsworth) is placed in charge. He is forced to stay on the ship, and dies in order that the others on-board will be able to escape, including his wife and newborn son. Fast forward twenty-odd years, and the young James Tiberius Kirk (Chris Pine) is something of a tearaway who gets drunk, steals cars and gets into fights. He is recruited by Captain Pike (Bruce Greenwood), and enters into the academy, intent on becoming a member of Starfleet, and perhaps finding meaning in his life. Along the way, he meets a bunch of strangely familiar faces.

There is such a fabulous energy to Star Trek that you quickly forget all preconceptions of what a Star Trek film can be (ponderous, preachy, predictable) and realise what a Star Trek film should be (playful, postmodern, preposterous). There are plenty of nods to the original in the dialogue of the characters (''Damnit Jim! I'm a doctor, not a physicist!'') but it also very subtly satirises pre-conceived notions of Star Trek; Kirk gets it on with a green woman, Scotty has a ridiculous accent and an over-eager red shirt dies spectacularly.

A lot of the humour of the film derives from its ability to pitch self-referential gags at both fans and non-fans, but it is not content to rely on good will and gentle parody; it's also got some terrific character dynamics. The friendship between Kirk and McCoy (Karl Urban), in particular, maintains a level of prickly amiability, with the two often getting on each others' nerves or getting the other in to trouble, that results in some of the film's funniest moments, including Kirk suffering from the aftereffects of a drug given to him by McCoy, and McCoy spouting pessimistic fears about space travel to Kirk as soon as they get on a shuttle together.

Chris Pine is every bit as brash and arrogant as a young Kirk should be, but without the obvious dickishness that Shatner oozed, and Zachary Quinto is as conflicted as a young Spock should be; caught between two worlds, unsure whether to let emotion or logic rule his mind. Elsewhere, Simon Pegg is daft and likable as Scotty and, in deference to tradition, he throws in a ridiculous Scottish accent, something he shares with Anton Yelchin, as a sparky young Chekov, whilst Zoe Saldana makes for a very sexy Uhura. It is the ability of the cast members to inhabit their iconic roles yet give them their own spin that makes them such fun to watch. It's a triumph of casting and I dearly hope that all of them return for the sequel.

J.J. Abrams, in only his second outing as a director after the better-than-it-had-any-right-to-be Mission Impossible 3, delivers action and spectacle that more than matches the playfulness of the writing and the charm of the cast. The action sequences are stunning to behold, with a wit and verve to them that you just don't see in most big budget blockbusters. One sequence, in which Kirk, Sulu (John Cho) and a red shirt freefall from a great height to a tiny platform, then engage in a scrappy hand-to-hand fight sequence, is funny, exhilarating and genuinely tense as, for fear of giving anything away, they are trying to save a world from destruction and it's not clear that they will succeed. To get that sense of dread and fear in an established franchise in which you know who is going to survive is a real achievement.

At this point I should offer up some negatives, but I am struggling to think of any. Eric Bana is not the strongest villain, but that's not something that the series has ever been known for, there are plot holes big enough to fly a Constitution Class starship through, and fans may be annoyed by the liberties that are taken with various aspects of the established universe. But it's so much fun that I really think that only a true humbug would say that they ruin the film, because Star Trek is as enjoyable, intelligent and exciting a film as you will see all summer.