(Låt den rätte komma in) Let The Right One In

I'm twelve, but I've been twelve for a long time. 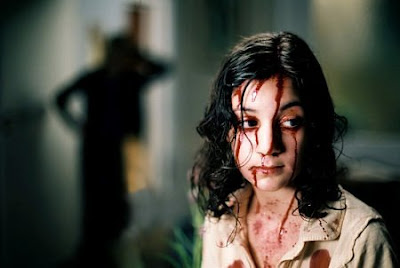 It has now been three days since I watched Let The Right One In and I'm not sure about it. I thought it was an intelligent, haunting and beautiful fairytale that entranced me from the moment that young, isolated Oskar (Kåre Hedebrant) met mysterious Eli (Lina Leandersson). However, I left the cinema feeling somewhat stunned and sickened by it. It shook me to my very core, and I can't stop thinking about it.

It's somehow appropriate that the film, and the book it is based on, took its name from a Morrissey song since it shares a lot of themes and tropes with Stephen Patrick's work and could be a dramatisation of one of his songs; there's a sense of teenage alienation, a retreat into books to escape from the darker side of life and a friendship, tentative though it may be, that is the centre of the characters' world, all of which fits very much into that particular worldview.

There's also vampires, which is where the comparison falls down somewhat.

Yes, Let The Right One In is a vampire movie, and that instantly throws up a number of images; cloaks, coffins, crucifixes and Robert Pattinson. Thankfully, none of these things feature in Let The Right One In. Well, there is a box but let's ignore that.

Director Tomas Alfredson and screenwriter John Ajvide Lindqvist, who adapts his own novel, take an unfussy, straightforward approach to the vampire mythos that focuses on the relationship between Oskar and Eli, rather than on the exsanguinations. They are presented as damaged individuals who discover something in each other that they can't find elsewhere. Oskar finds someone who is strong enough to help him fight the bullies that hound him, and Eli finds someone who doesn't fear or worship her.

The rest of the world is suitably fleshed out by Alfredson and Lindqvist, who create a world of individuals who co-exist with, but are distant from, each other. The neighbourhood is distinctly distant and ethereal, thanks to Alfredson's detached direction and the snow-covered, blood-speckled landscapes of the film, and this disjointed reality contrasts with the intimate relationship between the main characters. There's a real human side to their story that ultimately anchors it amidst the blood and violence.

Furthermore, whilst the film doesn't focus on the vampire elements, it does not forget that it is a vampire film; there are moments when Eli leaps from the shadows and bites innocent people, hopelessly overcome by her biological desire. The film firmly follows the traditional ideas of what vampires are, but also emphasises the human side. Eli kills people for sustenance, but she is not soulless in the way that most cinematic vampires are. She is a sweet, endearing child who just happens to have a need that, every so often, forces her to kill people. It's a delicate balancing act to make such a character likable, but Lina Leandersson nails it. She gives Eli an otherworldly air, yet still has a little girl lost air to her that makes her sympathetic and her relationship with Oskar so believable.

It is this relationship that forms the basis for my uncertainty about the film. There is a point in the narrative where Eli kills someone. By this point, she's already killed quite a few people, but this time it's a character that we have spent a lot of time with and whose motivations we completely understand. When Eli killed him I felt elated, then deflated as I realised that I was cheering on the death of a character that I sympathised with, but because I liked Eli and Oskar, I felt happier that he was dead, rather than the mass-murdering vampire. This ambiguity really stuck with me and, for fear of sounding melodramatic, made me question my own morality regarding the situation.

Now that's a reaction, and that's why, ultimately, I think Let The Right One In will be in my Top 10 for the year. It's not the acting, it's not the story, it's not the direction, it's the fact that it made me think and it elicited a visceral reaction out of me that I was unexpected.

Violent, poignant and haunting with a dark, pulsating heart, Let The Right One In is a special, special film.