Tao Vang Lor: What was it like to kill someone?
Walt Kowalski: You don't want to know. 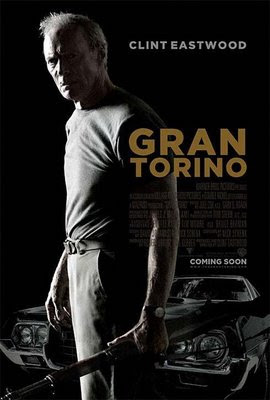 Walt Kowalski (Clint Eastwood) is a Korean War vet living in a neighbourhood that used to be Polish-Catholic but is now populated largely by Hmong (a people, not a place) immigrants. A curmudgeonly racist, Walt wants nothing to do with the Hmongs, though with his wife dead, the rest of his family self-involved cunts, and a priest constantly pestering him to confess, they are one of only a few groups that he dislikes. He is content to sit on his porch with his dog, Daisy, and to work on his house. When Tao (Bee Vang), a young Hmong, is told to steal Walt's 1972 Gran Torino as part of a gang initiation, Walt is forced to take action, and finds himself thrust unwilling into the lives of people he hates.

As soon as I saw the trailers for this, I knew that they were lying to me. I suspected that this wasn't going to be like a long-delayed sixth Dirty Harry film, with a 78-year old Eastwood kicking ass and taking names because that, frankly, would be ridiculous. Indeed, the moments when it does resemble that, such as when Walt beats the living hell out of a Hmong gang member, would seem fairly ridiculous if it weren't the case that the gang stuff and the violence are only minor concerns for Eastwood, who is interested in the character dynamics between Kowalski and his neighbours and uses the violence first to kick start the story and later to conclude it.

Much of the film is taken up developing Walt's acceptance of, and by, the Hmong community, and particularly the personal friendship he develops with Tao. In order to make amends with Walt, Tao does off jobs for him and Walt in turn teaches Tao something about being a man, hoping to offer him a way out of the neighbourhood that won't end in jail or the grave. It could seem hackneyed and trite since it's a character arc that has been seen so many times before, but the languid pacing and the understated direction, not to mention the lack of music throughout, keep things restrained and make the relationship feel much more naturalistic than it might otherwise have been.

All of this wouldn't really amount to much if there wasn't a glue holding it all together, and that is most definitely Eastwood as Walt Kowalski. Looking older than the sun and the sky and with a face that looks to have been worn away by the winds of time, Eastwood embodies the archetypal crotchety racist. Every look, every step, every sigh of disapproval at the world in general suggests someone who has lived a full life and doesn't really give a damn anymore. It's an unfussy, straightforward performance that perfectly suits the movie and its themes.

Much like Unforgiven, which is probably the film that is closest to Gran Torino in Eastwood's filmography, Gran Torino is a deconstruction of one of his screen personas; Unforgiven took apart the gunslinger, Gran Torino takes apart Harry Callahan. It's a film about death and violence but, rather than casually tossing them aside and getting straight to the bang bang, it recognises that violence takes a toll on a man and is not something to be entered into lightly. Walt is a man who has seen death first-hand and, even though he does resort to violence at times, does so only when he sees no other option. The script for the film is quite cliched and you can see the ending coming a mile away, but it has to be in order to comment on those same cliches.

It's not as good as Unforgiven as a deconstruction, and it's certainly not as good as Changeling, but it's another great addition to Eastwood's current fine run of form. Hopefully this won't be his final film, but if it turns out to be a farewell performance then it's a great swansong.
By Edwin Davies
Labels: film review
Newer Post Older Post Home