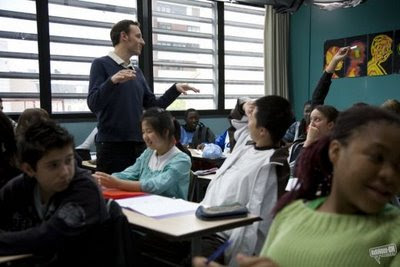 The Palme d'Or winner at last year's Cannes Film Festival, The Class is about a year in the lives of a inner city Parisian school and their teacher, François (François Bégaudeau, who not only stars but wrote the book upon which the film was based, which was in turn based on his own experiences as a schoolteacher.) Filmed with an eye for realism, the film uses documentary techniques and employs a cast that consists pretty much entirely of non-actors. This gives it a reality that is often missing from movies about teaching, as each of the students has a real and believable relationship with every other student and, in turn, with François. The performances all round are terrific because the students don't mug for the camera but neither do they underplay, they strike just the right level for a group of rowdy, largely under-achieving class of teenagers.

Bégaudeau is also great as the teacher. Since there is already so much of himself in the character, you get the sense that he is reliving actual events from his life and his performance benefits hugely as a result; he can play a teacher really well because he was a teacher. He also shows a willingness to show himself in a very bad light at times, often seeming to be indifferent to some characters and overly complimentary to others. I'm not sure if that is merely my interpretation, but there is certainly a bullishness to him that suggests that by this point in his life he has lost a lot of the idealism that drove him into the profession and is now more concerned with getting through the year.

The filmmakers have made some interesting choices in framing the story. The most obvious of which is that they keep all the action within the walls of the school, with the exception of the very start when we see François enter it. At no point do we follow François home at the end of a day, and, apart from a parents' evening in which François gets to interact with the families of his students, we get no sense of their home lives. It's perhaps a bit distancing since we don't ever really know the characters but, at the same time, it makes their conflicts all the more interesting since we have to fathom what is driving them for ourselves. The lack of context for outbursts could make the students seem like brats or they could make them seem like people having a bad day for an unknown reason, it's a matter of perception.

The film suffers a little in its plotting since it has to cover 9 months and, as such, often jumps forward weeks and months at a time. This isn't that noticeable a lot of the time since the film is more about specific incidents and being a comment on the experience of being a teacher in a modern school, but does make for moments when conflicts go from being red hot to completely resolved in a matter of seconds. The loose narrative structure does also mean that the film moves in fits and starts, so whilst some sections breeze by and are really fascinating, others just kind of mosey along at a languid canter.

All in all, despite its flaws, its a great film that aims to recreate the feeling of a classroom and does it superbly.
By Edwin Davies
Labels: film review
Newer Post Older Post Home