Have you ever seen a one-legged dog making his way down the street? 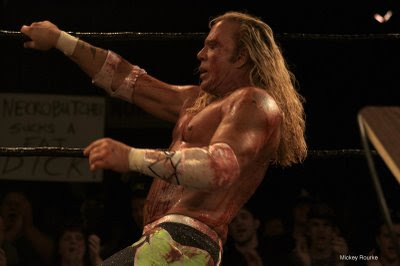 As an avowed wrestling fan when I was about 7 (for point of reference, I lost interest when Yokozuna beat Hulk Hogan for the WWF title in 1993), I'd been looking forward to Darren Aronofsky's film for quite some time, primarily because of the subject matter, but also because of the star and the context within which the film was made. I was surprised by what I found there, though my ultimate opinion of the film is currently conflicted.

Randy 'The Ram' Robinson (Mickey Rourke) is a professional wrestler who achieved a considerable degree of fame in the 80s thanks to his bout with The Ayatollah, a rival wrestler. 20 years later, and Randy is a has-been who, despite continuing to take part in matches and signings, has seen his best days. After a near-fatal heart attack, Randy tries to reconnect with his daughter, Stephanie (Evan Rachel Wood), and develops his relationship with aging stripper, Cassidy (Marisa Tomei).

When watching The Wrestler, it is best not to go in thinking that you'll get 'Rocky Balboa' with tights. That is absolutely not what the film is. It is much closer to 'Raging Bull', or the latter half of it, since those are both quite dour films about someone who has passed their prime but still dreams of the big time, whilst Rocky Balboa is more triumphal in its treatment of a similar subject matter. So, that's the first thing you need to know; it's not going to be a feel good film.

Now, Randy the Ram. Randy is someone who, having basked in the limelight, still holds on to the lingering thrill of performing in front of a crowd. Sure, the crowds are smaller and the locales aren't as glamourous, but the fans are still as devoted to spectacle and they provide Randy with a sense of belonging and purpose that he can't find elsewhere. Even when he is taking part in hardcore matches that feature broken glass, barbed wire and fans providing their prosthetic legs as bludgeoning tools, or just regular matches that require Randy to cut himself to satisfy the bloodlust of the crowd, he feels like he belongs, and Darren Aronofsky's direction captures that perfectly, lending a grimy but balletic feel to all of the wrestling scenes, whilst still underlining the toll that such activities have on Randy's body, as well as those of the other wrestlers.

Narratively, 'The Wrestler' initially seems to be following a well trodden path,. suggesting that the film is going to be about Randy getting his one last shot at the big time. This is all just a diversion, setting up, to borrow a term from boxing, a sucker punch. Once Randy has his heart attack, the wrestling that so dominated the first thirty minutes takes a back seat and we are plunged into the father-daughter, wrestler-stripper drama. There's not a huge amount new in any of this, but the energy that the cast bring to it and the dynamism of the direction makes it feel much fresher than it is. The storytelling is incredibly economical, with nary a moment wasted in establishing who Randy is, where has been and where he is. The opening credits consist of a camera panning over news clippings from the start of Randy's career, before showing us Randy himself, 20 years later, in the aftermath of a match, going home and being locked out of his trailer by his landlord. Within 10 minutes, we know all we know about the character without a wasted word or moment of forced exposition. It never lets up from there on.

There is a sense that it is a performance film, and that performance is definitely that of Mickey Rourke. Randy 'The Ram' Robinson is, if not the role that he was born to play, then certainly the role that life has made him perfect for. Randy is a battered, bruised and beaten man who still lives for the screams of the crowd and the thrill of taking part in the pantomimic act that is professional wrestling. At the same time, he is an effortlessly charming individual who can win over pretty much anyone he wants. He is a pathetic figure in the best sense of the word; he is a man for whom you can feel nothing but sympathy. He still lives out his former glories, to the extent that he still has a NES with a wrestling game that features him as a playable character on it (interestingly enough, the height of his career would be the late 80s, the height of Rourke's own career as an actor), but he doesn't seem to wallow in it, instead choosing to enjoy life as it comes and remaining a dreamer, albeit a somewhat deluded a tragic one. The correlations with Rourke's own life can hardly be missed, and there's a definitely sense that he is drawing upon his own life experiences in portraying 'The Ram', even down to his speech about hating the 90s and his near-final monologue about the audience being the only people who can decide when he is through. It's a really subtle performance that hinges on his ability to interact realistically with the characters that surround him; his relationship with his daughter is strained but not overwrought, and the tentative romance between him and Cassidy/Pam is completely believable.

Rourke absolutely defines the film, to the extent that it is easy to overlook the other aspects that make it such a good piece of work. Chief amongst these is Marisa Tomei as Cassidy. Fairly early on in the film, it is established that Cassidy and Randy are of a kind; both use assumed names, both rely on the admiration of punters for financial support, and both are fast approaching the points in their lives where their bodies will no longer support the jobs to which they are applied. Randy, as tough as he seems, is one fight away from another heart attack and possibly death, and Cassidy is coming to a point where men will not pay for her to strip for them. The difference between them is that, ultimately, Cassidy has accepted this, and Randy is finding it hard to accept that he has taken his body as far as it will go. Tomei, who, based on this and 'Before The Devil Knows You're Dead', is establishing herself as a actor of note, rather than a punchline regarding her Oscar win for 'My Cousin Vinny', is wonderful to behold, managing to be both sexy and vulnerable and having a real repartee with Randy. It's easy to see why he would develop feelings for her, and it is their relationship that makes the final act of the film make sense.

As well as being a return to form for Rourke, 'The Wrestler' has been perceived as a return to form for director Darren Aronofsky, whose previous film 'The Fountain' has seemingly dismissed as an overblown mess, an assessment that I fervently disagree with since I consider The Fountain to be one of the most audacious and bold science fiction films of the last twenty years. However, no matter what I may feel about Aronofsky, his films are almost always divisive. Tale 'Requiem For A Dream', Aronofsky's mots famous and acclaimed film prior to The Wrestler, for example. I hate Requiem For A Dream; it's a wretched,horrid film full of wretched horrid people (except for the effervescent Ellen Burstyn, who just about makes it watchable) that makes me feel wretched and horrid for watching it. Yet, it still managed to provoke such an extreme reaction from me, in the same way that The Fountain managed to get an extreme reaction from me, albeit a highly positive one. The Wrestler, on the other hand, failed to do that; I felt that it was a good film with a great performance, but it didn't excite or anger me in the way Aronofsky's previous work has. Maybe that's a sign of his maturing as a director, the deliberate, lo-fi style of The Wrestler is certainly a step up from the over-styled Requiem For A Dream, but even if it is, I feel a bit disappointed that the willfully provocative director of one of my favourite and least favourite films has faded away to be replaced by a skilled but fairly standard director.

I didn't love The Wrestler, but it is certainly a very good film. Rourke is simply wonderful, fulfilling the promise that he has let slide for so long, and his central role is braced by the work of his co-stars and Aronofsky's direction. It's quite a tough film, and it certainly is during the first half an hour, but it is ultimately quite rewarding, if not exactly uplifting.

If nothing else, I'd like to see Bruce Springsteen bag Oscar number 2 for his theme song; so rarely has a song so perfectly encapsulated the preceding film, even to the extent of enriching the film itself despite its playing over the end credits.
By Edwin Davies
Labels: film review
Newer Post Older Post Home