Oscar Season? Where are the Holocaust dramas? 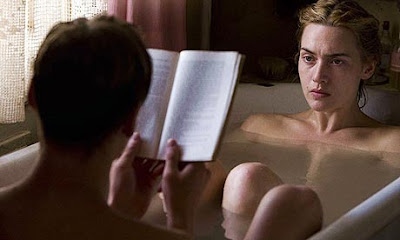 I went into this without feeling particularly keen on it. Not that I wasn't interested, I'll watch Kate Winslet in pretty much anything and I love Bruno Ganz, but nothing I had read about it had really chimed with me prior to watching it. I was pleased, then, to find a film that was both emotionally and intellectually engaging for about two-thirds of its running time, but which really ran out of steam in the last twenty minutes.

Quite reductive plot gubbins: In Neustadt, West Germany, 1958, young Michael Berg (David Kross) is helped by Hanna (Kate Winslet) and the two become romantically entangled, mixing their love-making with reading sessions, as Michael entralls Hanna with renditions of works of literature. Meanwhile, in 1995, the older Michael (Ralph Fiennes), now a somewhat distant, unemotional man, is getting back in contact with his twenty-something daughter and reminiscing about his relationship with Hanna and what he learned about her past.

Stephen Daldry's film, for the most part, is subtle, intelligent and gripping, with each act focusing on a different time period and event in the lives and changing relationship between Michael and Hanna and all three performers doing sterling work. The opening 40 minutes is set in 1958 and is entirely about the start of their relationship. Cue plenty of artfully erotic sex scenes and a surprisingly large amount of nudity on the part of Winslet. There's a heady, lustful atmosphere over this section that has just the right level of discord and darkness in the background to suggest what is to come. It's tightly wound and I found myself completely involved with both characters thanks to the undeniable chemistry between them. There's something incredibly natural about the way in which these two people get together and complement each other, clearly having a profound impact upon each other without overselling it. Winslet really shines throughout the film, but this section impressed me most since was able to do sexy, tender and haunted all without resorting to trite sentiment or cliche.

The aftermath sets the stage for Act 2, in which Michael, now a young law student, attends a trial of SS guards at Auschwitz, one of whom is Hanna, and things really get interesting. Accompanied by his lecturer (Bruno Ganz), Michael finds himself forced to confront his personal feelings for Hanna and how they conflict with his ideas about what happened in the camps, her role in it, and whether or not he could do something to help her. Though it's not a surprising turn of events if you know even the slightest bit of information about the film, the execution of it makes for a morally ambiguous and exciting half an hour or so and I was completely gripped by it, particularly the way in which both Kross and Winslet upped their game from the first part in order to match the requirements of the scenario. A little less time spent with Michael and his fellow students discussing the issues wouldn't have hurt since all the action happens in the courtroom or on David Kross's face, but that's a minor concern.

I'd also say that I thought the way in which it handled its subject matter was spot on. I've always had misgivings about films that try to represent the Holocaust and felt that the approach of focusing on the aftermath, particularly how Germans dealt with people who were involved, created an intellectually stimulating and morally complex second act that fed into the more personal drama of the relationship between Michael and Hanna, ultimately leaving me unsure how to feel about either character. The use of images associated with the Holocaust, most importantly the decision to evoke the image of piles of discarded shoes, was powerful without being manipulative or crass. It's an exceptional film that deals with this subject that can leave you not feeling sure who to root for and that is truly to be commended.

As much as I liked the film, I did have problems with it. Foremost of all, the future (or middle) sections featuring Ralph Fiennes. I thought that he was very good in his role, but throughout the film I sat there during the his sections thinking, 'Why don't I care more about him and is there going to be a big payoff to this?' Ultimately there was, which factors into my main criticism, and I was quite moved by it in a way which, based on the rest of his performance, I was not expecting, but for the most part his segments interrupted the flow of the more interesting and involving parts featuring David Kross. The back-and-forth narrative, rather than making scenes poignant, just interrupted the narrative flow.

The aforementioned 'main' criticism of mine would be that after 90 minutes of being really terrific, the film lost it in the final twenty minutes or so and left me with a sour taste in my mouth. How to do this without ruining the plot? The story of the film at one point reaches the 1980s, having shown how things developed for our two main characters in the 60s and 70s, and seems to be building towards a single event that I was expecting to be the crux of the whole piece. As it was, it proved to be anticlimactic, and the film continued. At this point, the story took the easy way out, then had a scene wherein two of the characters talk about what the film is about. After the heady, emotionally turbulent first act, the moral murk of the second, and the emotional punch to the gut that I had received just before, I could practically see my good will for the film slipping away. I was just so disappointed with the way that the story wrapped up, how obvious it got, that my overall opinion of the film was soured.

I would still recommend that people see it since it is intelligently made and deals with a tricky subject matter in a subtle and tasteful way, I just wish that the ending had been handled differently.

It probably should be in German, too, since the story might have had more resonance if made by a German crew. However, if it being in English and starring one of the most acclaimed actresses in the world helps it to reach a wider audience then more power to it.
By Edwin Davies
Labels: film review
Newer Post Older Post Home