"That's America. Love it or leave it" 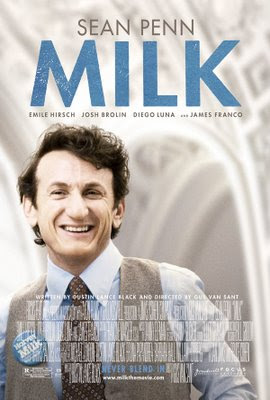 1978, San Francisco. City Supervisor Harvey Milk (Sean Penn) is sat at a table, dictating a tape to be played in the event of his death by assassination. Milk, the first openly gay elected official in U.S. history, is aware that someone may want to take him down, and he uses the tape to relate his life as a gay activist, including his role as the ‘Mayor of Castro Street’, how he won his campaign for office and his battle against Proposition 6, a law that tried to make it legal to fire gay teachers.

‘Milk’ is probably director Gus Van Sant’s best film in almost two decades. That could be considered damning with faint praise, since, aside from 2003’s ‘Elephant’, I think he’s done nothing but rubbish since ‘My Own Private Idaho’, but it is a genuine compliment since Milk is a good, occasionally great, film about an incredible man.

The task of portraying that man falls to Sean ‘So Intense He Could Curdle Milk Just By Looking At It’ Penn. I’m not a fan of Penn’s particular brand of super-serious acting so his performance came as a surprise since he seems to have toned down that approach without abandoning his commitment to the role. His portrayal of Harvey Milk is light, charming and approachable; within the first five minutes he manages to pull James Franco, now that’s charm. At the same time, he avoids turning Harvey into a one-note character; he can be flamboyant and playful, but behind that is a grim determination to see his community recognised, represented and protected. The two halves of his character are intertwined beautifully, meaning that when he has to give an ‘inspirational’ speech, the words have an emotional resonance not because the film has made him seem so significant but because it has made him so relatable.

With such a strong central presence, it would be easy to categorise the film as purely Penn’s, but that would ignore one of the strongest ensemble casts you’ll see in a film this year. Everyone, from Diego Luna as one of Harvey’s lovers to Emile Hirsch as one of his more militant supporters, all the way down to relatively minor performers like Victor Garber as Mayor George Moscone, give strong performances.

The best performance in the film, though, possibly better than Penn’s, is that of Josh Brolin as Dan White, a conservative supervisor that serves with Harvey. Brolin has become a reliable character actor over the last couple of years, showing a particular knack for portraying affable small-town types with shades of darkness, such as Llewellyn Moss in ‘No Country For Old Men’ or, in extremis, ‘Doc. Block’ in Planet Terror. Brolin channels that persona into Dan White, a seemingly decent man hiding a malignancy. White starts out as someone who strikes a tentative friendship with Harvey, if only for political reasons, but gradually comes to hate him since he believes Harvey to be deceitful and exploitative. The transformation is subtle, giving us a sense of the pressure that White is under without overselling it, and you never get to see under the surface of White’s facade too much, but what you do see is unsettling

If I were to be reductive and sum Milk up in one phrase, I’d use ‘well-intentioned’, but we should remember that the road to mediocrity is paved with good intentions. It’s clear that everyone involved believes in the importance of their story and the significance of Harvey Milk, I just don’t feel that the film does justice to his story. There’s a feeling of safeness about the film, as if they want to tell this amazing story but don’t want to offend anyone by making it overtly gay, so it ends up feeling subdued when it should soar; they play it straight, which seems counter-productive, given the story. However, even if the film is not equal to the story, it is the story that saves the film. It is so irrepressible, such a rousing and inspiring tale that the rather pedestrian presentation cannot completely occlude it.

At its heart, Milk is a film about the promise of America and a moment when it lived up to its principles. It is about a moment when ordinary people, faced with an attempt to dehumanise them and impose an unjust and frankly evil law upon them, fought back and said that they would not go quietly into the night. If it fails to get across how monumentally important Harvey Milk was, and how amazing his story is, it can at least be said that it still bears an important message that is relevant to the times in which we live.