I think it looks fine.
I think I look like a female golfer. 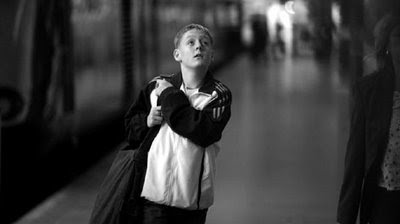 The first thing that needs to be said about Somers Town, the latest film from Midlands-maestro Shane Meadows, is that it's slight, though I don't mean artistically or thematically. It certainly lacks the punch of Meadows' two most recent feature films, Dead Man's Shoes and This Is England, but I would never say that such a warm film about male friendship and adolescent love is trivial or unimportant, far from it, but there is a definite light, unburdened feel to it that stands in contrast to those films, even if the stark black and white photography would suggest otherwise.

Part of this lightness is down to its story, which is established within 10 minutes and almost exhausted in 40 minutes. A young man named Tomo (Thomas Turgoose) hops on a train from Nottingham and goes to London where, in next to no time, he's mugged. Beaten and dejected, he strikes up an unlikely friendship with Marek (Piotr Jagiello), a Polish lad with a penchant for photography and a crush on French Waitress, Maria (Elisa Lasowski), who Tomo quickly develops a liking for as well.

That's more or less it for plot, but that's okay, since the film is more concerned with following the development of the relationship between the two leads, and their relationship with Maria, than it is with any sort of major narrative drive. In fact, the film rarely feels like anything more than a series of entertaining little skits featuring the same characters, and that's really where most of its charm comes from. Turgoose and Jagiello are wonderful together and it's the little moments between them that make the film work. Paul Fraser's script is full of hilarious moments that are made all the moreso by the chemistry between the leads, and Turgoose really builds on the promise shown in This Is England by delivering a nuanced, funny and real performance.

Sadly, for all the times when the film works, there are those when it doesn't, and this is at least partly due to its length. Somers Town is only 75 minutes long and as a result feels simultaneously too short and too long; there are too few actual events to make it really feel like a film, yet there are also scenes that go on for too long, as if they were just trying to get it up to a length that would be suitable for a feature release. Scenes like a sequence involving a wheelchair and another in which Tomo and Martek get drunk are good examples of this. The former just about works because it is terribly sweet and uplifting, the latter doesn't because it's just not as entertaining as it needs to be, and both just serve to highlight how short the actual thing is. You get the feeling that the film would have worked better if it was an hour long programme shown on the BBC.

There are also moments when the film reaches for a more dramatic tone which whilst not at odds with the rest of the film, since there is a strain of darkness and melancholia running throughout it, do not have the appropriate groundwork for them to make them as effective as they perhaps should be, particularly regarding the relationship between Marek and his father. Their relationship is shown to be pretty stable but with hints of discord, but not enough to warrant a scene in the film which is incredibly maudlin and a case of by rote melodrama. It's not terrible or all that out of keeping with the story, it just feels out of place considering the way the rest of the film plays out.

Still, for all its flaws, Somers Town is another fine film from Shane Meadows. It's funny and real, with the central relationship echoing that in A Room For Romeo Brass, my favourite Meadows film to date, and it's just a very human story that is unadorned and honest. There are moments that don't work, but it's worth it for those that do.
By Edwin Davies
Labels: film review
Newer Post Older Post Home