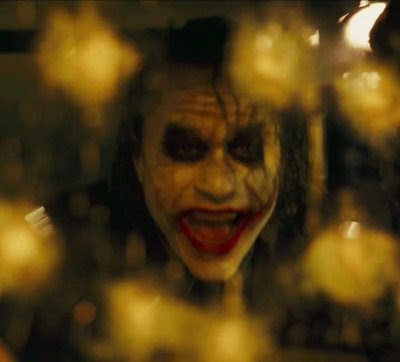 So, how good is The Dark Knight? Well, let me tell ya. We're about half an hour into the film, I'm already captivated by the story, marveling at Christopher Nolan's direction and absolutely gobsmacked by Heath Ledger's performance. Put simply, I'm loving it. At this point, I start to feel a tell tale pressure in my bladder; I need to relieve myself. Now, I know full well that the film has another two hours left, and that I'd only miss a few minutes if I headed out, but I just held it in, because I did not want to miss a minute of the thing. I was even wary of blinking, lest some wonder escape my vision. That's how you know you've seen something special.

A year on from his return to Gotham and his showdown with Ra's Al Ghul, Bruce Wayne (Christian Bale) is basking in his good works. He's cleaning up Gotham with a little bit of help from Lieutenant Gordon (Gary Oldman), he's a hero to the people of Gotham, albeit one that exists outside the law, and, in new DA Harvey Dent (Aaron Eckhart), he sees a kind of hope; that one day, Gotham won't need Batman. However, this seeming harmony is badly disrupted by the actions of The Joker (Heath Ledger), whose desire for destruction threatens to annihilate Gotham, and he starts going after the heroic trio in a big, bad way.

I love Batman, always have, always will. As a kid, I was enamoured of Tim Burton's gothic take on the series, though I still to this day have no idea how the hell Catwoman's creation works in Batman Returns, and Batman Begins was my second favourite film of 2005, after King Kong (yes, yes, shut up). But the version of Batman that is strongest in my mind is not Michael Keaton, or even Christian Bale, but the animated version from the 90s. I loved the way in which each of the villains in the series seemed to come fully formed, with a few exceptions, and the series never bothered with the arduous creation of the villains that the film series (up until Batman Begins) always favoured.

The Dark Knight has a similar ethos to it, in that it doesn't go to great lengths to explain who all the characters returning from the previous installment are (if you haven't seen Batman Begins, you're in for a very confusing open half an hour) and particularly because The Joker is introduced as an absolute, with no origin story or background. He does have a past, though he prefers it to be multiple choice, but he is a complete being from the off. And not merely a being, but a force, a destructive, anarchic spirit that leaves broken lives in his wake. He's the shark in Jaws, he's the lone bomber in Dr. Strangelove, he's the gold in the Treasure of the Sierra Madre. In short, he is the death, destruction and fear personified. He's only the focus of the story in that his actions are what drive the engine of the film. It's his ingenious ploys and his devilishly cruel thought experiments that bring Gotham to its knees and make the characters, and the audience, question what it means to be heroic.

This, inevitably, brings us to the elephant in the room. The white-faced, Chelsea Smiled elephant in the interrogation room: the performance of the late Heath Ledger. Prior to seeing the film, I wasn't sure how I would feel about it; would I be able to appreciate the performance for what it is, or would my feelings about his untimely death cloud my judgement and make more of a performance than there was to make? I still don't know the answer to that question. However, what I didn't feel while watching the film was a sense of poignancy, a sense that he had been taken so soon to be giving a performance that good, and the reason for this is that within two minutes of seeing The Joker on screen, I had forgotten about the handsome Australian under the make-up; he was The Joker, pure and simple. Rarely have I seen such ferocious commitment to a role that it completely obliterates all other thoughts about the actor. It's a flesh, bone and spiritual transformation that is staggering to behold. He's a deeply unnerving presence, and in a movie full of violent mobsters, corrupt cops and a hero who is basically a psychopathic vigilante, that's saying something. There's a vibrancy to him, an energy and an amorphous, unpredictable quality that is both hugely exciting, yet absolutely terrifying. He's the most charismatic character in the film, but you wouldn't want to tell him to his face.

This is not to take anything away from the rest of the cast; the film really is an ensemble piece and the other players, new and old, are uniformly excellent. Bale is a magnetic presence as Bruce Wayne and Batman, though his Batman voice is still very, very annoying, Morgan Freeman and Michael Caine get all the best lines again, Maggie Gyllenhaal is a superbly divided Rachel Dawes (though I never had a problem with Katie Holmes, to be honest) and Aaron Eckhart is a real delight as Harvey Dent. However, it is kind of difficult not to think of it as Ledger's film, as you find yourself wondering when the Joker will next show his face, anticipating it, even though you know something terrible will happen when he does.

Eckhart, in particular, has probably the toughest role in the film as his downfall is at the heart of the film and the question it asks the viewer. What does it mean to be a hero? Harvey Dent's downfall, I'm assuming that the whole 'one side extra crispy' aspect of his story is out of the bag by this point, from an idealistic DA intent on cleaning up the city to a deranged, half-mad murderer is a piece of real tragedy, but even when he has lost his marbles, he is still driven by a sense of right and wrong, even if it is a very personal kind and one which is severely twisted. At the same time, you have Batman, a man willing to risk the deaths of hundreds of innocent people to try and take down The Joker, and in both instances, you're left wondering who is right in all of this? It's a dark, murky tale that offers no simple answers, and delights in putting ever harder questions to you.

Of course, it's these questions that set The Dark Knight and its predecessor apart from the likes of Iron Man. These are big budget spectacles driven by ideas, not effects and at their heart are interesting questions not only about the characters we are seeing on screen but about humanity in general. Almost from the off, the film brings into question the very idea of Batman and over its running time makes us wonder if, indeed, his presence in Gotham is a good thing. Sure, people feel safer than they did before, but Batman's presence has led to an escalation (an important theme of the film) as it has attracted, or perhaps even created, The Joker. Furthermore, The Joker is presented not solely as a foil to Batman but a reflection of him. As he himself says ''I don't wanna kill you; you complete me.'' They're symbiotic beings that feed off each other, with only a very thin line of sanity dividing the two.

In terms of grander themes, there's an interesting thread through the film about what people are, deep down; good, or evil. The Joker repeatedly sets up little tricks and traps which call upon the people of Gotham to kill each other in order to survive, intending to prove that, at their core, all people are like him. This leads to some of the film's most interesting and emotional moments, with some scenes that you just wouldn't expect to see in your average blockbuster. Nolan and his co-writer brother Jonathan have created something which, under the guise of a comic book film, reaches for real substance and weight. It doesn't examine its themes quite as closely as it could if there wasn't the constant need for some big action set-pieces, but the mere fact that it raises them is worthy of praise.

Aside from the performances, The Dark Knight exceeds its predecessor in every possible way. Christopher Nolan's direction is more assured, particularly in the action sequences, one of the weak points of Batman Begins, for me, and he crafts a film that is at the peak of its genre that also brings in elements of the crime drama. If you take away the masks and the freaks, this could be Heat or The Untouchables. The former is a particularly strong influence, visually, but also in terms of what the film tries to do, which is to tell a story of a city, as much as a personal conflict between two freaks. We get a real sense of Gotham as a place, a city where corruption is so rife, that you can never be certain if the person you're getting into a car with is working for the police, the mob, The Joker, or any other number of factions. It's a completely paranoid film in which everyone is a potential killer or accomplice, and it creates a uneasiness that is hard to shake off.

The story is also an improvement on Begins as it is not weighed down by the need to tell an origin story or to rehabilitate the character to an audience still thinking about nipple suits and Batskates. The narrative twists and turns in a smooth, yet terrible fashion, and it represents one of the few instances in a modern blockbuster where I have been completely uncertain about what was going to happen next. There's a terrible sense of dread that permeates the whole thing, and you end up suspecting that any character in the film could die at any moment, and there are a few that do.

It's a damn near perfect blockbuster. The direction is taut, muscular and driving; the story and script are top-notch; the tone is, quite frankly, malevolent, delightfully so; and at the heart of it all, there is a genuinely aw-inspiring performance from Heath Ledger that manages, in as much as it can, to transcend the terrible albatross that is his death. It's definitely the best Batman film, probably the best film inspired by a comic book and if it doesn't wind up in my top 10 of the year, we've got a great 5 months ahead of us. I honestly can't wait to see it again, and again, and again.

One more little anecdote before I go. In all my years of going to the cinema in the U.K. (17 and counting so far, hopefully many more to come) this is the first time I have seen people cheer at the end of a film. Now that's something.
By Edwin Davies
Labels: film review
Newer Post Older Post Home