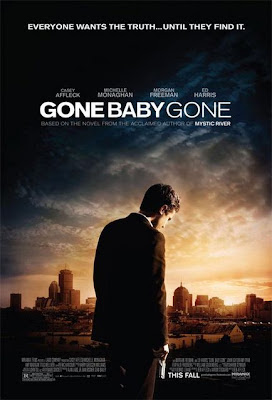 Four-year old Amanda McCready goes missing from her home whilst her boozy, part-time drug muling mother Helene (Amy Ryan) is out for the evening. Three days into the investigation and no one is any closer to finding her. It's at this point that Amanda's aunt Bea (Amy Madigan) and Lionel (Titus Welliver; good actor, great moustache) call on private detectives Patrick Kenzie and Angie Gennaro (Casey Affleck and Michelle Monaghan) to ''augment the investigation'', even though they don't particularly want to get involved and know that the case could very easily break them. In Angie's words, ''I don't want to find a four-year old in a dumpster.''

Based on Dennis Lehane's novel of the same name, Gone Baby Gone could just be notable as the feature film debut of Ben Affleck, who also has a co-writer credit on the screenplay, and it could all too easily have been a self-indulgent affair designed to lure people in based on Affleck's name alone. Fortunately, that is not the case, as Affleck and his collaborators have made a tight, atmospheric and refreshingly bleak (if that's possible) film.

Much of what is good about the film is down to Affleck The Elder's direction, which is assured and suggests that he may have a very fine second career ahead of him if he chooses to pursue it. Though it's ostensibly a thriller about a kidnapping, the strength of the film is in its characterisation, its ambience and its depiction of Boston. It's this last part which I think is key to how good the film is since it places itself firmly within its environment, creating a great sense of authenticity that goes beyond the more obvious things like accents and lots of bars with Irish names. You really get a sense that the film is giving us a glimpse into a real world, one of the people who ''start in the cracks, then fall through them.'' Affleck and his co-writer, Aaron Stockard, also bring a realistic feel to the dialogue, making it feel loose and free-flowing without becoming messy; everything is to the point, but it's wrapped up in some deliciously funny, often foul-mouthed lines. In many ways, its quite an ugly film; there's a grainy, unpolished quality to it that touches upon everything from the cramped, dirty interiors to the relative lack of photogenic actors and extras, with the exception of the two leads, of course.

In some ways, this is a problem for the film; Affleck (The Younger) and Monaghan seem like outsiders in a world that the story demands they know everything about. They're too damn good looking and too clean to really seem a part of the world they have to work in, so you don't quite get the sense of immersion that you would think a film like this would hinge on. Also, from the view of the film as an adaptation, they're almost a decade too young for the characters, since Gone, Baby, Gone is the fourth book in the Kenzie-Gennaro series and the characters in the book are both pushing forty and have already solved many cases and killed many people by the time they tackle the McCready case (though that's not the strangest piece of casting, case in point, a character who, in the book, is a white guy who thinks he's black is actually black in the film). However, the film makes its leads' youth an advantage, giving other characters plenty of reason to question their involvement in the case, allowing for Affleck and Monaghan to seem out of their depth in a way which you never feel the characters in the book do, and allows for a very nice in-joke about half an hour in. Though Monaghan is under-used, Casey Affleck's magnetic, little boy lost performance more than manages to hold the audience for the running time, adding further evidence to the argument that he may be blossoming into one of the finest actors of his generation.

There's also fine support from Ed Harris and John Ashton as a pair of C.A.C. (Crimes Against Children) officers who find themselves working with Kenzie and Gennaro and whose methods are less than orthodox (as is the tradition with any decent movie cops), as well as from Morgan Freeman as the head of CAC. Probably the strongest performance in the film, though, is that of Amy Ryan, who was nominated for the Oscar for Best Supporting Actress for her role. It's a role that could easily have been overly nasty or heartless, but Ryan manages to make Helene at least partially sympathetic, even if you know that she is an awful mother and that she might never change. It's this sort of ambiguity that the film really does well; though some characters may agonise over what, if anything, is 'right', the film never offers any answers and its interesting to see how the characters react to the events that occur, with some of these seeming to come completely out of the blue.

So, what's wrong with Gone Baby Gone? Not much, if I'm honest, but it does have a number of problems that cause the film to fumble it at the end. The main problem with the film is its final 20 minutes, even though Affleck and Stockard have pruned Lehane's loping, tangential novel into a much more concise, leaner and, in some ways, more muscular beast, ditching characters, combining others and significantly reworking the mechanics of the plot, it still has a lot of threads running through it and even if it is nowhere near as twisty-turny as the novel, it still has a few disorientating turns and things need to be wrapped up by the end. Whilst it's perfectly easy to wrap these things up in a couple of pages in a novel, it's less easy to do so effectively in 10 or 15 minutes in a film, so the finale drags as all the various plot points are resolved and we're treated to an overdose of flashbacks to explain everything (this is commonly known as 'Narc Syndrome'). It also doesn't help that some of these moments veer dangerously close to melodrama, something that doesn't really fit with the gritty, down and dirty aesthetic of the rest of the film and they really do go on, and on, and on, and on, and on. Not a terrible thing by any means, but when the first three-quarters of a film feels like 40 minutes and the last 15 feels like an hour, it does cause the mind to wander.

There's also a feeling that the more obviously 'thriller' elements of the story are not taken all that seriously, as if they're just an encumbrance that the mood and characters have to put up with, so it sometimes comes as quite jarring when, for example, a gunfight breaks out and ends almost immediately. This is mainly because Ben Affleck is playing to the film's strengths and so the decision to avoid lengthy, crowd-pleasing gunfights is one that ultimately benefits the other elements of the film, but a little bit more attention could have been paid to them, since what little we see of them is very good.

If it's not a masterpiece, it's only because it is ultimately a victim of its own virtues. For 100 minutes, its a great film with strong performances from the entire cast, but especially Amy Ryan and Casey Affleck, a very good script and tight direction. It falls at the final hurdle thanks to a protracted finale, but what's great about it more than outweighs the failings.

*Yes, I know the commas aren't in the title of the film but they are for the book and I prefer it with the commas intact. Get off my case, dammit!
By Edwin Davies
Labels: film review
Newer Post Older Post Home