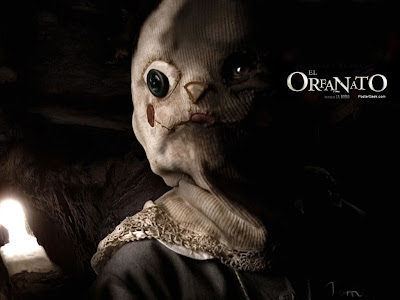 Laura (Belen Rueda) is a woman who grew up in an orphanage. Having been adopted and lived a full life, she decides to buy the orphanage and re-open it as a home for disabled children, taking he husband Carlos (Fernando Cayo) and young son Simón along with her. It's not long before Simón is talking to imaginary friends that aren't that imaginary and who are in a very playful mood.

Juan Antonia Bayona's film arrives amidst a flurry of hype and praise, much of it describing it as one of the best horror films in recent years. While that may be true, and I would certainly lean that way, it's important to point out that it is in no way an original horror film; it's a haunted house story, pure and simple. As such, it conforms to a lot of the conventions and cliches that have run through this style of story for centuries and which will be known to anyone who has ever heard a good ghost story (doors slamming of their own accord, dark and creepy house, a lone character who believes that something is going on who is met with skepticism from almost all sides). Cinematically, it sits alongside the likes of The Innocents and bares more than a resemblance to (though for my money is much better than) The Others in that it tells a fairly standard ghost story very, very well.

Fortunately, the joy of the film lies not in what it brings to the genre, which is very little, but how well it carries out those aspects of it with which we are so familiar. Bayona's direction is helps to create a taut and uneasy atmosphere and there were moments that had me, quite literally, jumping out of my seat.

The cast all acquit themselves very well, with Rueda being a stand-out as the mother who has to contend with forces that may or may not be real. She's an utterly convincing heroine, even if she does stumble from one obvious horror set-up to another, and the relationship she has with her son is very interesting.

If we take the most basic component of any horror film being how much it scares the audience then, for me, The Orphanage is a very good horror film, even if I'd classify it more as a suspense film than horror. It follows the cliches and the haunted house rule book very closely, no bad thing, so it doesn't reinvent the genre. However, as an exceptionally well made and engaging piece of horror it is a great success.
By Edwin Davies
Labels: film review
Newer Post Older Post Home