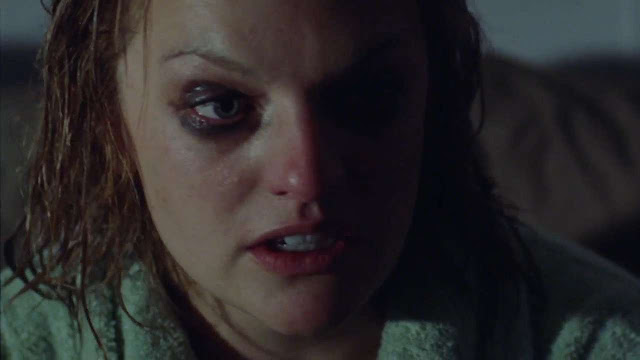 There's a long stretch of Listen Up Philip, Alex Ross Perry's caustic and Rothian examination of a caustic and Rothian writer played by Jason Schwartzman, in which the film digresses from its main plot in order to focus on the life of Philip's ex-girlfriend, Ashley. The sequence is easily the best part of the film, in part because Elisabeth Moss' performance provides a nice break from the Great Male Writer dick-swinging of the rest of the film, and as a way of illustrating just how toxic it is be to share your life with the aforementioned dick-swingers. As much as I liked the rest of the film, I found myself wishing that Moss was actually the star, and that the whole film could be just about Ashley dealing with the aftermath of her relationship with Philip.

It seems that Perry heard my wishes and, in something of a Monkey's Paw situation, offered up the darkest and most distressing version of what I had imagined. From its opening scene, which consists of nothing but an unbroken shot of Catherine (Moss), her eyes ringed by pools of running mascara, verbally tearing apart the remnants of her failed relationship, Queen of Earth lets us know what to expect in stark, uncompromising terms. This is a film about a woman on the verge of a nervous breakdown, and Elisabeth Moss is going to be very central to exploring what exactly that means.

After that high-pitched opening, the action shifts to the more sedate setting of a lake house in upstate New York where Catherine has agreed to spend some time with her childhood friend Ginny (Katherine Waterston) as she recuperates from the breakup. They're awkward around each other in the way that any two friends would be if one of them had experienced a loss and the other is unsure about how to help. Through judicious use of flashbacks to previous occasions when the two friends stayed at the house together, Perry slowly reveals that their chilliness towards each other isn't caused by recent events. As their lives have ebbed and flowed, they have gradually drifted apart and built up a healthy backlog of resentment towards each other. Catherine resents the way that Ginny is happy to live off her family's money instead of trying to make it in the world on her own, while Ginny is openly contemptuous of Catherine's decision to give up her artistic aspirations in order to manage the affairs of her father, himself a very successful artist.

From that jumping off point, the film becomes a relentlessly tense and uncomfortable psychological drama in the vein of Roman Polanski's best work. Like Knife in the Water or Repulsion, Perry confines his actors to a single location for the most part, letting the claustrophobia work on the nerves of both the characters and the audience. As the two women spend more time together and more of their shared history is revealed, the film slowly and inexorably builds discomfort through each forced pleasantry or attempt at bonding. In some scenes, Queen of Earth feels like a comedy of manners aimed at skewering the pretensions of young, affluent Brooklynites, and Perry takes great care in showing how the slights and disagreements have accrued over the years. Catherine and Ginny may not hate each other, but they may be closer to being enemies than friends.

Despite the largely icy atmosphere, there are moments of genuine affection between the characters, such as a scene in which they have a long and intimate conversation about past relationships and frustrated hopes, during which we get a glimpse of what their friendship may have been at some point in the past. Yet the form of the film prevents such a moment from getting remotely close to sentimental. Instead of doing what most filmmakers would have done and breaking the scene into multiple shots and letting editing do the rhythm, Perry and his regular cinematographer Sean Price Williams shoot their conversation in a single take, all in extreme close-up, and allow the camera to drift from Ginny's face to Catherine's and back again. Sometimes it focuses on the person talking, but for much of it the camera maintains its unblinking focus on Catherine as she listens.

In that moment, Moss lets a slew of conflicted emotions play across her face, suggesting that Katherine is half-listening to Ginny's story, and half trying to think how a human being would act in this situation.  The length of the shot, and the fact that Perry allows the actors to dictate the pacing of the scene, add to the tension of it, since the performances are raw in a way which is hard to watch for very long without wanting to turn away.

Through little more than a camera move and a couple of great performances, Queen of Earth turns what could have been a heartwarming moment into a scene which dares the viewer to look away from the sight of two people trying and failing to connect. It's one of many scenes which highlights the thrilling dynamic between Moss and Waterston, with the former getting the opportunity to play someone who is experiencing incoherent grief and barely keeping herself together, and the latter playing the less showy but no less tricky part of a woman working very hard to push past her own selfishness to help someone else, with admittedly limited success. (If Perry continues his pattern of building his subsequent films around a supporting performer in his current film, then a starring vehicle for Katherine Waterston would be an excellent next step.)

The claustrophobia of the story and the setting gives the beauty of the natural world surrounding them an unreal and unsettling quality which affects both women in striking ways. For Catherine, the isolation which is meant to help her clear her mind actually increases the velocity of her downward spiral, and while Ginny finds brief escape in running, it ultimately reminds her that she has to return to the friend who she feels she should help, but who she finds increasingly difficult to spend any time alone with. This becomes especially difficult once a neighbour (Patrick Fugit) with whom Ginny has a prior romantic history shows up and inadvertently sharpens the divide between the two of them by providing her with another means of escape while further alienating Catherine.

Everything about the film has a woozy, faintly dangerous atmosphere, suggesting that something terrible is seconds away from happening at any given moment. There's a dreamlike quality to it, too, which occasionally veers into nightmarish when Catherine is left to her own devices. The lines between  reality, fantasy and memory are little more than smudges in Queen of Earth, which has the effect of downplaying Catherine's breakdown until quite late in the film. Since everything feels somewhat unstuck from the real world to begin with, Perry and Moss are able to temper her distress to such an extent that she never seems like she is too far gone, even when she is walking around the house in the middle of the night, reliving events which may or may not have happened.

That heady, paranoid and dissociative quality is occasionally so strong that the film ends up feeling like little more than a Polanski homage, something which is not helped by Keegan DeWitt's music, which occupies the same pretty yet unsettling territory as Krzysztof Komeda's score for Rosemary's Baby. But if it is merely a pastiche, then it is an impeccably delivered one. Much as Brian De Palma was able to use Hitchcockian style to his own ends, Alex Ross Perry has managed to make the best Roman Polanski movie in decades.