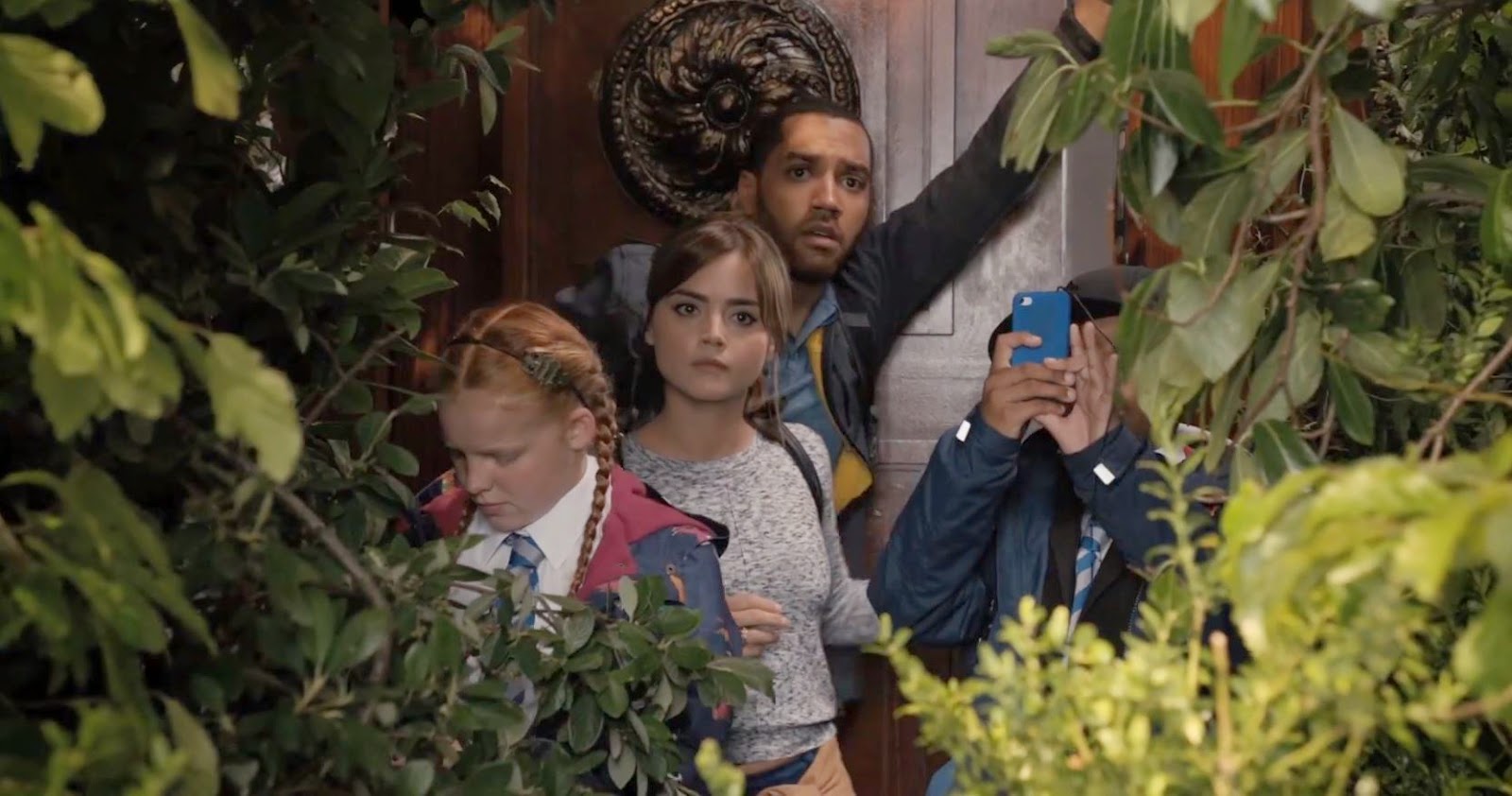 I've been watching a lot of The X-Files lately. I've been slowly working my way through the show over the last year or so, but I've been a little more diligent recently because I've been listening to Kumail Nanjiani's very entertaining podcast The X-Files Files, in which he and a guest watch and talk about different episodes every week. One of the more common criticisms Nanjiani has of The X-Files is its tendency to produce episodes in which Mulder and Scully function as little more than witnesses to a strange occurrence which resolves itself by the end of the episode. Those stories can still be good thanks to the dialogue and the performances, but they're not terribly dynamic because they turn the heroes into passive figures, rather than active participants in their own story. I couldn't help but be reminded of that while watching "In The Forest of the Night," an episode in which something crazy happens, The Doctor does almost nothing to solve the problem, and then the credits roll.

Now, that doesn't mean that the episode itself is irredeemably bad, but it does mean that it falls flat as a narrative. A young girl named Maebh finds the TARDIS and says she needs help. The Doctor is shocked to discover that the area around the TARDIS is covered by a dense forest when he should be in the centre of London, and he's even more shocked to discover that he is in the centre of London, and that the entire world has been overrun by trees. Meanwhile, Clara and Danny have taken a group of children to stay overnight at the Natural History Museum, and upon leaving it they find themselves surrounded by the mysterious forest. The two groups quickly meet up and start trying to figure out how the trees appeared, who created them, and what their purpose is.

And that, for the most part, is it as far as the plot of the episode goes. There's a bit in the middle where Maebh runs off and is menaced first by wolves and then a tiger, only to be saved by Clara and the Doctor, then Danny and the rest of her classmates, respectively, but there's little in the way of plot development until the very end of the hour. Everything else is about funny little moments, such as The Doctor introducing himself to Clara and Danny's class by leaning around a tree like The Cheshire Cat, funny little quips (a girl, upon hearing The Doctor say that he can't believe that none of the children are impressed by the spatial dimensions of the TARDIS: "There wasn't a forest, now there is a forest. Nothing surprises us anymore.") and character development.

Specifically, the episode gently prods the relationship between Clara and Danny. He sees a pile of the children's workbooks in the TARDIS, which in turn makes him realise that she is still gallivanting around the galaxy with The Doctor. Which is weird, because I though that Danny already figured that out in "Flatline." I like Danny as a character, and I think that Samuel Anderson has done a good job of fitting in to the world of the show, but the show has been a bit slapdash with his relationship to Clara, and what he does and doesn't know about her work with The Doctor. I liked the way that the episode had him say that he doesn't want to go on the TARDIS because his experiences as a soldier have left him yearning for a quieter life with someone he loves. It felt like a nice touch, especially since it seems likely that he'll be called back into action for the finale in some way, so there will be some contrast there between what he wants and what circumstances force him to do, but it also felt like a response that was wholly separate from the character as we have seen him so far. Coming from, say, Rory, a character who went places with The Doctor and actually saw some serious shit, that development would have made more of an impact. Here, it felt like the resolution to a dilemma that the show hadn't raised yet.

That was in keeping with the rest of the episode, which felt similarly slapdash and thrown together. The revelation that the forest was created by fairy-like creatures was thrown out pretty quickly, as was the one that, rather than intending to harm humanity, they had made the forest to absorb the impact of a potentially devastating solar flare. That was all tied up with Maebh hearing voices and being put on medication following the disappearance of her sister, but that only really seemed to be there so that the show could have a shot of a small child talking with the voice of a horde of adult ones once The Doctor made contact with the creatures, and so that there could be some bromides about grief making people more receptive to the world around them. And then there was a whiplash-inducing reversal in which Clara went from telling The Doctor to leave Earth rather than to stay and die with it, to The Doctor returning and saying everything would be okay. The whole thing felt like the writers came to the end of the series, realised they had a lot of ideas that didn't fit anywhere else, then crammed them into a single episode.

The episode also felt off in the technical aspects. It was light on special effects - no doubt because the ones around it have been, or will be, heavily reliant on them - but some of directorial choices by Sheree Folkson were just plain off-putting. There were some odd, Edgar Wright-esque whip pans for some flashbacks of the children misbehaving at school, and there was a horribly awkward cut when Maebh saw her mother on the TARDIS' screen and then was immediately hugging her, with no time in between for the reunion to have any effect. The return of her sister at the very end of the episode was also handled in a rushed way that suggested that Maebh's whole storyline could have been removed and the episode would have run a lot more smoothly. It's odd that an episode so light on plot somehow managed to be really busy, but there you go.

In the end, the only notable action The Doctor takes is in preventing the government from realising a defoliant that would have killed the leaves on the trees and, in the process, allowed the solar energy to hit the Earth. Danny seems more or less okay with Clara going off with The Doctor, and all the kids go home to their parents apparently unmauled by the wild animals roaming freely around London. The Doctor waves off Clara's concerns that people will wonder what happened by saying that everyone will just forget about it, which is about as close to credited writer Frank Cottrell Boyce just showing up and shrugging at the camera as you're likely to get. (Though at least The Doctor did get to deliver such a blah explanation with a killer line: "The human superpower: forgetting.") That seems like a pretty perfect ending to this particular episode, though, because it's hard to imagine anyone remembering it for very long.


- Jenna Coleman sold the hell out of the line "I don't want to be the last of my kind." I didn't for a minute buy the idea that the Earth was about to be destroyed (there's only so many times you can play that card before it becomes meaningless) or that The Doctor would crumble so quickly in the face of her nobility, but I did buy Clara's willingness to die with the people she loved.

- It's a real shame that this episode was so uninteresting because Frank Cottrell Boyce is one of the best and most interesting screenwriters working in the British film industry. Check out his collaborations with Michael Winterbottom (especially 24 Hour Party People and A Cock and Bull Story) and Danny Boyle (Millions).

- As someone who watched Don't Look Now a few too many times as a teenager, I would have been no good trying to find a girl in a red coat in an unfamiliar location. That sort of thing does not usually end well.

- Missy showed up very briefly to say that she was surprised by the trees defending the Earth from the solar flare. Like everything else in this episode, that appearance was essentially meaningless, but Michelle Gomez is still pretty cool.

- It's damning with faint praise to say that this was like a slightly better version of The Happening, but it kind of was.
By Edwin Davies
Labels: Doctor Who, Frank Cottrell Boyce, Jenna Coleman, Peter Capaldi, review, science fiction, television
Newer Post Older Post Home