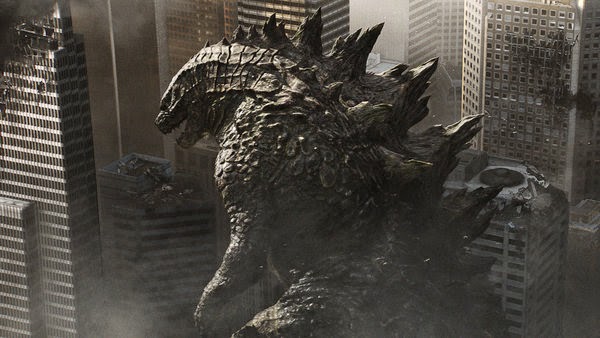 If there is a single moment that encapsulates the strengths and weaknesses of Godzilla, Gareth Edwards' take on the most venerable of movie monsters, it is the one in which Ken Watanabe, playing Dr. Ishiro Serizawa, the film's requisite expert on things no one has ever seen, utters the words "Let them fight." In terms of the narrative, it comes at a crucial point, the moment when the film acknowledges that the only way to resolve the threat posed by the insect-like creatures known as MUTOs is to let Godzilla destroy them. It's a moment filled with awe at the sheer power of these building-sized monsters, acceptance at the powerlessness of humanity in the face of such enormity, and more than a little bit of excitement. Even scientists dedicated to the preservation of the human race want to see giant creatures whale on each other.

There's also an air of frustration about it. Prior to the big, city-leveling fight that serves as its crescendo, Godzilla is fairly coy about showing too much, relying on hints and suggestion rather than showing the audience what it has in store for them. Godzilla him(?)self is initially only seen in parts, and very briefly. You see him featured in old newsreels that form the opening credits/prologue, or the spikes on his back cresting through the water, or his giant foot crashing into view through the windows of an airport terminal, before the film finally reveals him in all his terrifying grandeur, back-lit by fire and panic as he strides towards a MUTO, ready to destroy everything in his path. Even then, the resulting fight is only relayed through news footage, rather than displayed in its full glory.

This approach will be familiar to anyone who saw Edwards' debut, the ultra-low budget sci-fi road movie/allegory for border crossing Monsters, which also kept its eponymous creatures hidden wherever possible, and if it had to show them it generally relayed images of them through the distancing device of a television screen. Although the two movies share a general approach, they are markedly different in their intent. Monsters had to hide its extra-terrestrials for reasons of budget, and in turn had to focus on the human drama of two people trying to make a perilous journey through dangerous territory. Godzilla, meanwhile, cost literally hundreds of times more to produce than Monsters; Edwards doesn't need to disguise any limitations in the budget because there basically  aren't any. Here, the obfuscation is all about building tension, and slowly working to the point where Godzilla and the MUTOs can finally be unleashed. In an era where blockbusters rely so much on instant spectacle, Godzilla's restraint is pretty admirable.

That slow approach to the material also allows Edwards to indulge the same love of Spielbergian filmmaking that formed the spine of Monsters. It feels like one feature-length love letter to the inventor and perfecter of the summer blockbuster, and there are some pretty deep cuts sprinkled throughout. The obvious reference points are clearly Close Encounters of the Third Kind (from which the film borrows its sense of awe) and Jaws (from which it borrows its pacing and tendency to hide its monsters), but it also draws heavily from Spielberg's flawed, underrated version of War of the Worlds. Godzilla's general tone, which mixes scenes of mass destruction with a granular focus on the chaos that follows, is very much in keeping with the 2005 film, but Edwards also lifts whole images from it. Most notably that of a runaway train screaming through the dark after bursting into flames, and one in which characters discover the remnants of off-screen destruction floating down a river. It walks a fine line between loving homage and outright theft, one that ends up being deeply revealing about what Spielberg's film got right and where Edwards' film falls short: Its characters.

Where War of the Worlds had a human interest story at its centre, Godzilla just has humans whose main purpose is to occupy the frame until the monsters finally show up. While Dr. Serizawa and his assistant Vivienne Graham (Sally Hawkins) are the first characters introduced, the majority of the story focuses on the travails of the Brody family. In an early scene, Joe Brody (Bryan Cranston) has to make a tragic choice in order to prevent a nuclear disaster, one which leads him to become obsessed with discovering the truth of what actually happened (hint: it involves monsters). This in turn causes him to become estranged from his son Ford (Aaron Taylor-Johnson) who as an adult flies to Japan to bail his father out of jail after he tried to enter the irradiated zone around where the disaster occurred. This in turn brings them to the heart of the ensuing crisis, though the film never makes a compelling argument for why we should care about them over the thousands of other people who are faced with the sudden emergence of terrifying beasts.

Cranston does a decent job of imbuing Joe with a sense of loss and righteous madness, essentially fulfilling his now standard role of enlivening under-written characters in big-budget genre films, and his scenes are among the better non-monster ones in the film. Unfortunately, Joe isn't the main character; Ford is. This is where Godzilla starts to come unstuck, because Aaron Taylor-Johnson is not a compelling screen presence. You could describe him as "chameleonic", but only in the sense that he's so bland that he fades into the background and after a couple of seconds you forget you're even looking at a person. He's so forgettable that on at least three separate occasions I mistook one of the other utilitarian soldier types in the film for him, despite having spent over an hour watching him slowly bumble his way from San Francisco to Japan and back again. You start to wonder if the vehicles that convey him from place to place would be more compelling protagonists, if only because they wouldn't talk. Taylor-Johnson isn't the only actor who does pretty uninspired work - Elizabeth Olsen, who was so captivating in Martha Marcy May Marlene, does little more than look concerned whenever the camera is on her, as if she's always trying to figure out if it's going to start raining - but because he's on screen for so long, and leaves such a negligible impression, it's hard not to blame him for making the human element of Godzilla feel so redundant.

Then again, that may be the point of the film, since many of the most affecting elements of Godzilla have nothing to do with its characters. There are lots of little grace notes, such as the moment when Joe and Ford return to their former home to discover things from their past, strewn about and covered by years of dust and overgrown by plants, that say a lot more about the tragedy that befell the Ford family than writer Max Borenstein's dialogue ever manages to convey. Some of its most striking images are ones of devastated, empty cities, and it only takes a shot of vacant streets to get across the gravity of the situation. In Godzilla, people are at the mercy of forces they can't comprehend or control, and their lack of impact on both the creatures and the story does seem to be reflected in how little attention is paid to making the characters interesting to be around. It's basically a showcase of great production design which is occasionally spoiled by allowing people to walk through it.

Yet the idea that the humans in Godzilla don't have to matter only goes so far. Edwards' direction and Borenstein's script try to bridge the two distinct halves of the Godzilla legacy: They try to capture the same serious, allegorical tone that marked Ishirô Honda's 1954 original, albeit with the metaphor changed from nuclear apocalypse to environmental catastrophe (and, in its frequent visual allusions to the Fukushima nuclear disaster, the way in which the two can combine), as well as the colossal monster battles that typified most of the subsequent entries in the series, though without any of the associated camp.

They're largely successful in achieving that balance - the scenes of destruction are pretty thrilling, and the quieter moments of dread are genuinely unnerving - but even Honda's film managed to imbue Godzilla's victims with character, even if they were only on screen for a few seconds. None of the characters in Edwards' Godzilla are anywhere near as indelible or heartbreaking as the mother In Honda's film who holds her children as they prepare to die, or the scores of children marked for death by fatal radiation. Most of the people in this Godzilla are anonymous and instantly forgettable, including the ones who actually get some lines of dialogue.

The humans in Godzilla may not matter, but that doesn't mean that they shouldn't, and while the sheer scale of the battle that ends the film is thrilling enough to pay off the slow build, it doesn't completely exonerate Edwards from forcing us to spend ninety minutes with dull characters who, like us, are just waiting for the fight to start already.